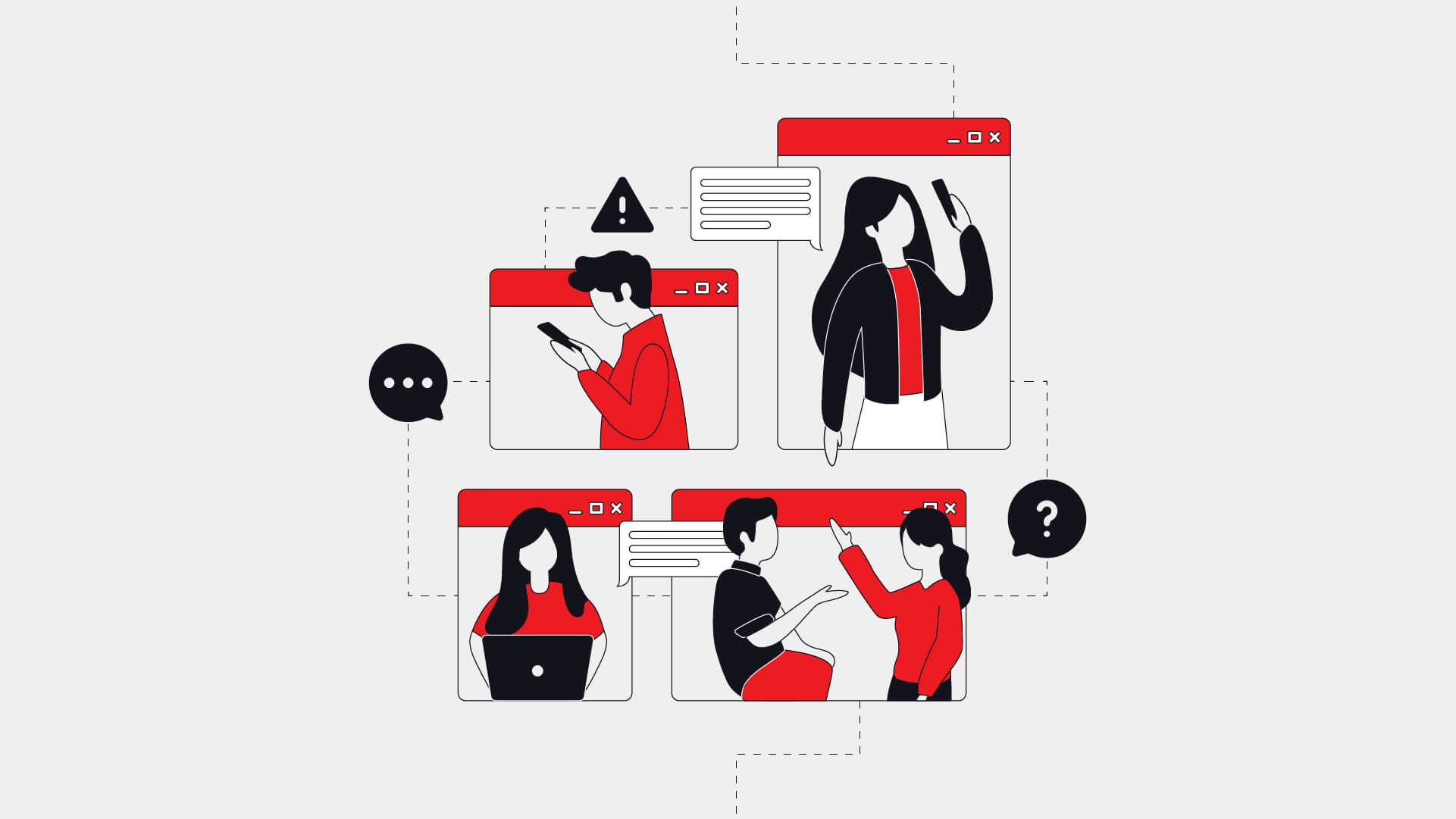 Indonesia is no exception to the sharp increase of hate speech expression in the social media era. In a Pretty Good Podcast Episode, academic Imam Ardhianto traced the evolution of trolling culture in Indonesian media practice and how conservative Islamic groups have turned into a political force able to mobilise hate speech. In recent years, hate narratives and violations of freedom of religion and expression online have been on the rise – posing challenges in maintaining secular, inclusive, and enabling civic spaces for diverse perspectives.

EngageMedia is supporting efforts to counter online hate speech through a campaign emphasising the use of creative mediums to present counter narratives. This campaign builds on a previous initiative by the Association for Progressive Communications (APC), supported by EngageMedia, highlighting the impact of hate speech on marginalised and vulnerable communities.

This campaign is part of EngageMedia’s larger collaboration with APC for the “Challenging hate narratives and violations of freedom of religion and expression online in Asia” (Challenge) project.

In partnership with Diani Citra from Sintesa Consulting, EngageMedia produced a research report titled “In the Name of Religious Harmony”. Published in June 2022, the report looked at the past ten years of digitalisation in Indonesia and how it has affected freedom of religious beliefs and expression.

A notable finding from the report was that civil society organisations in Indonesia are perceived to be exacerbating religious discrimination. This piece by Pradipa P. Rasidi, EngageMedia Digital Rights Program Officer for Indonesia, scrutinises human rights and religious freedom activism in the country. A critical reflection on the challenges of mainstreaming rights discourse, the article puts forward the argument that a more nuanced approach and collaboration with religious authorities is needed to uphold freedom of religious expression.

This campaign aims to highlight and amplify the voices of community members who are using creative and artistic mediums to promote diverse perspectives and rights-respecting discourse. To this end, EngageMedia partnered with KBR Prime to conduct capacity building workshops with 82 university students who have been active in challenging religion-based hate narratives in their communities. The workshops aimed to increase participants’ knowledge and skills in creative content production in support of freedom of religion and belief. The workshop also included a story pitching session, where two participants will be selected to receive mentoring and financial support to produce creative content for their communities.

Rachmad Ganta Semendawai, a student from the State University of Yogyakarta, was one of the two winners in the story pitching session. For the campaign, he produced two videos that invite critical reflection on the teachings and practice of religion. In his first video, Ganta asks if there is no god for dogs, as he criticises the beating of dogs in Indonesia for the sake of halal tourism. In the second video, Ganta reflects on his experience seeing children in orphanages exposed to Islamic entertainment glorifying violence as holy wars.

Ilham Rahmat Alam, a youth influencer from Bone, Sulawesi and a student of the State University of Makassar, uses podcasts to talk about peace and diversity. For the campaign, Ilham produced a podcast episode describing his personal growth and journey from being a prejudiced person into a more tolerant one. Through community service (Kuliah Kerja Nyata), Ilham realised that, at their core, religions espouse good values, although the manner in doing so varies in the practice itself. 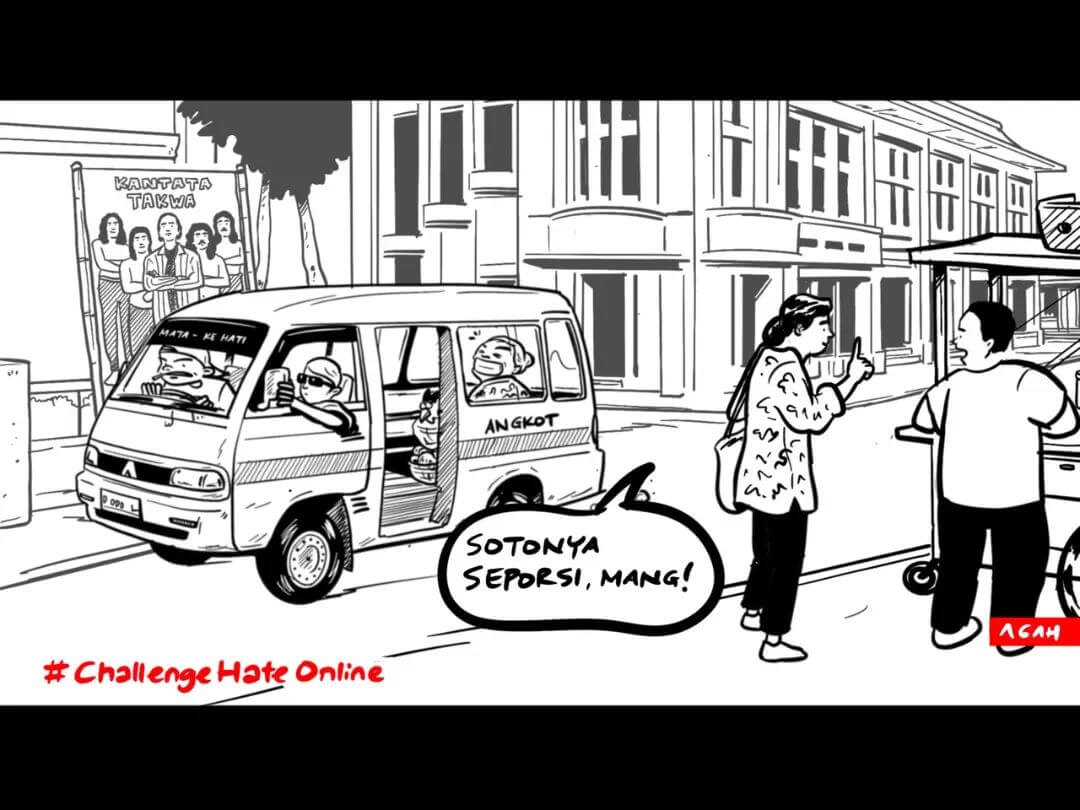 EngageMedia also collaborated with two artists to produce digital storytelling pieces illustrating the ways people can practice acceptance of religious beliefs. The Agah, a graphic recorder involved in activism, produced the short video Soto Toko Wow which tells the story of a soto (meat soup) restaurateur and his diverse patrons overcoming hostile online comments during Ramadan. Mice Cartoon, a well-known comic strip artist who has published numerous social commentary comics with the national newspaper Kompas, produced two animated videos for the campaign. The first video featured two women from completely different backgrounds being willing to feel uncomfortable in public spaces, while the second showed how a hate speech perpetrator, frustrated from family burdens, posted hate speech online in an attempt to gain a sense of control.

Hate speech can create or exacerbate deep-seated conflict and cause trauma that needs healing, both at the individual and community level. EngageMedia collaborated with KBR Prime to produce two podcast episodes on trauma and how to move towards recovery.

The first episode traces the roots of trauma from conflict, with Reverend Jacky Manuputty sharing his experience in mediating the Ambon riot that happened after the Indonesian democratic reform. Anthropologist Ferry Rangi from the Ambon State Christian University also shared his experience working with indigenous communities and survivors of state violence and land grabbing in Indonesia.

In the second episode focusing on recovery from trauma, interfaith activist Riston Nainggolan Batubara talked about convening youth from different religious, ethnic, and political backgrounds in ‘peace camps’ to discuss their religious beliefs and gain insights into each other’s perspectives through a series of team building sessions and art activities. Psychologist Sutrisna also explained the importance of psychosocial treatment for victims of social conflict and added that people need access to safe spaces for free speech in the digital realm.

We invite people in Indonesia and other countries to join the #ChallengeHateOnline campaign and spread the word to your network.