Beyond memes and social media campaigns: How do we talk about religion and human rights? 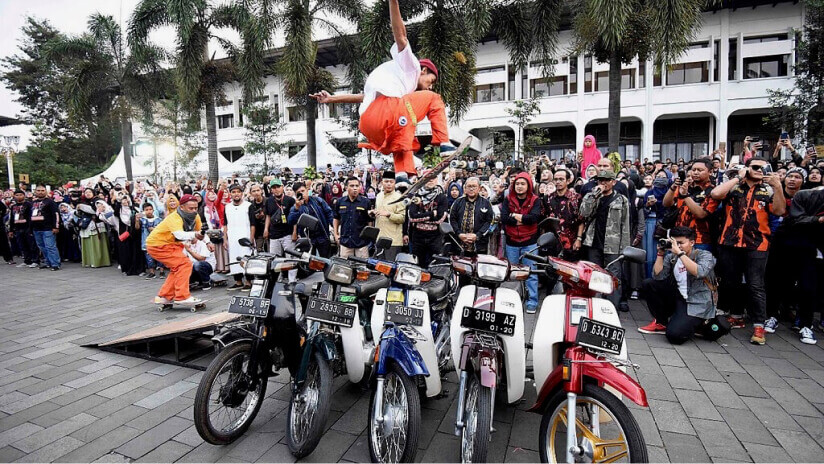 Members of the Islamic group Pemuda Hijrah gather in an open space in Bandung after a session of motorcycle riding while waiting for iftar (breaking fast) during Ramadan. Photo via Wikimedia Commons.

In 2016, then-Jakarta governor Basuki Tjahaja Purnama (better known as Ahok) courted controversy for allegedly insulting Islam during a campaign rally. Among those who criticised the Chinese-Christian politician was Ombat, who once yelled in a press conference: “He [Ahok] has beaten the drums of war against us Muslims!”.

But Ombat is not your typical conservative in white garb. Often seen sporting a black leather jacket and baggy pants, Ombat is the vocalist of underground metal band Tengkorak. He, along with YouTuber Hanan Attaki, skateboarder Pevi Permana, and actor Fauzi Baadila, are among a group of trendy and tech-savvy conservative Muslims who have been increasingly influential in shaping Indonesian public conversation. Cool is their brand; catchy taglines and flashy online campaigns are part and parcel of their da’wah (the call to properly embrace Islam).

In recent years, Indonesia has seen the increasing use of the internet, social media, and other online spaces to preach varying brands of Islamic practices, including conservative views. With this comes a rise in hate speech related to religious expression. To counter these, civil society organisations (CSOs) have worked tirelessly to push for legal frameworks and civic education promoting human rights and freedom of religious expression, with many CSOs often adopting the same creative tactics used by conservatives. The 2019 presidential election protests, for instance, saw CSOs using striking visuals with memes and funny one-liners on social media to get across their respective messages on human and digital rights.

But despite efforts to mainstream discourses on human and digital rights, CSOs themselves are seen as part of the problem. According to the report “In the Name of Religious Harmony: Challenges in Advancing Religious Freedom in Digital Indonesia“, 24 of 46 respondents from various sectors – academe, government, faith communities, technology companies, and social media platforms – questioned the role of CSOs in addressing the issue of religious freedom. Ten of the 24 believed that CSOs exacerbated the problem. One respondent said that these organisations amplified the polarisation in Indonesian society, with CSOs reifying the idea that there are only two sides warring against each other: the progressive, diversity-respecting liberals and the bigoted, hate-speech-inducing conservatives.

To better reach and engage people, CSOs need to go beyond creative memes and social media tactics. An approach that recognises the authority of religious leaders, and treats them as true partners, must underlie any campaign that resonates with the people.

Discourses on human rights and religious freedom are riddled with jargon, a major hurdle in mainstreaming such discourses. To many, human rights remain a foreign concept that needs to be put on hold and assessed whether it aligns – and does not compromise – perceived ‘Indonesian national values’.

In 2020, I spoke with a young activist working in Bandung, West Java, who was supporting urban poor communities forcibly evicted from their homes to make way for multiple development projects. There was palpable tension in the area as police and the military were involved in the evictions. At the time, the activists feared the creeping influence of firebrand Islamic clerics whose expressions of discontent resonated among the urban poor. To deter this influence, another activist friend suggested that the communities be “educated routinely” with basic human rights principles. Unsurprisingly, the locals brushed those human rights sermons off.

This story echoed other activists’ experience of what sociologist Abdul Mughis Mudhoffir called “bourgeoisie activism”. According to Mudhoffir, Indonesian activists are siloed into circles of CSOs and removed from the grassroots they claim to speak for. Activists would come into local communities with a set of predetermined knowledge, using frameworks and jargon proposed by international development agencies – a saviour mentality embedded within.

Human rights activism is not only estranged from the grassroots, but also often locked into a dichotomy of the moralistic battle between “good” against “evil”. This is particularly apparent in religious freedom activism, where religious attitudes perceived as problems are framed as polar opposites to the ideas of human rights, democracy, and bhinneka (diversity). Such discourses repeatedly make use of the words “intoleran (intolerant)”, “kelompok radikal’(radical groups)”, “ekstremis’(extremists)”, “fundamentalis (fundamentalist)”, or “bigot”. These terms have been used not only to push human rights discourse but to justify action against those on the other side: President Jokowi’s administration, which has been facing opposition from particular circles of Muslim groups, has adopted the designation kelompok radikal to describe groups deemed as threats to national stability and to justify a crackdown, with the support of a legion of cyber armies.

Instead of enriching human rights discourse and reaching the grassroots, such words have contributed to the polarising narrative in Indonesia, especially in online discourses: that there are relaxed rights-respecting “good Muslims” who adhere to the ideals of being “Nusantara (truly Indonesian)”, and stodgy undisciplined “bad Muslims” who “imported ideas from Arabia”.

On the other hand, creative conservative Muslims seized this foreign lexicon as an opportunity for a counter-narrative. The Twitter-based Komunitas Bigot-bigot Indonesia (Indonesian Bigots Community) proudly embraced the label of “bigot” as a badge of honour: “If being a bigot means defending the creed of Islam, then yes, we are bigots”. They turned the hostile words against them into a means to build solidarity with other Muslims.

A gap exists between the ideals of human rights activism with religious realities on the ground. I am not saying we should do away with jargon. As activists, what we can and should do instead is to recognise our own biases when using concepts like human rights and democracy, listen deeply and reflectively to the concerns of the people we talk to, and ensure understanding by speaking in the same language. What do we mean by “betterment”, “progress”, “impact”, or “rights-respecting”, anyway? Who is excluded and included by those definitions? What issues matter most to the people we talk to? 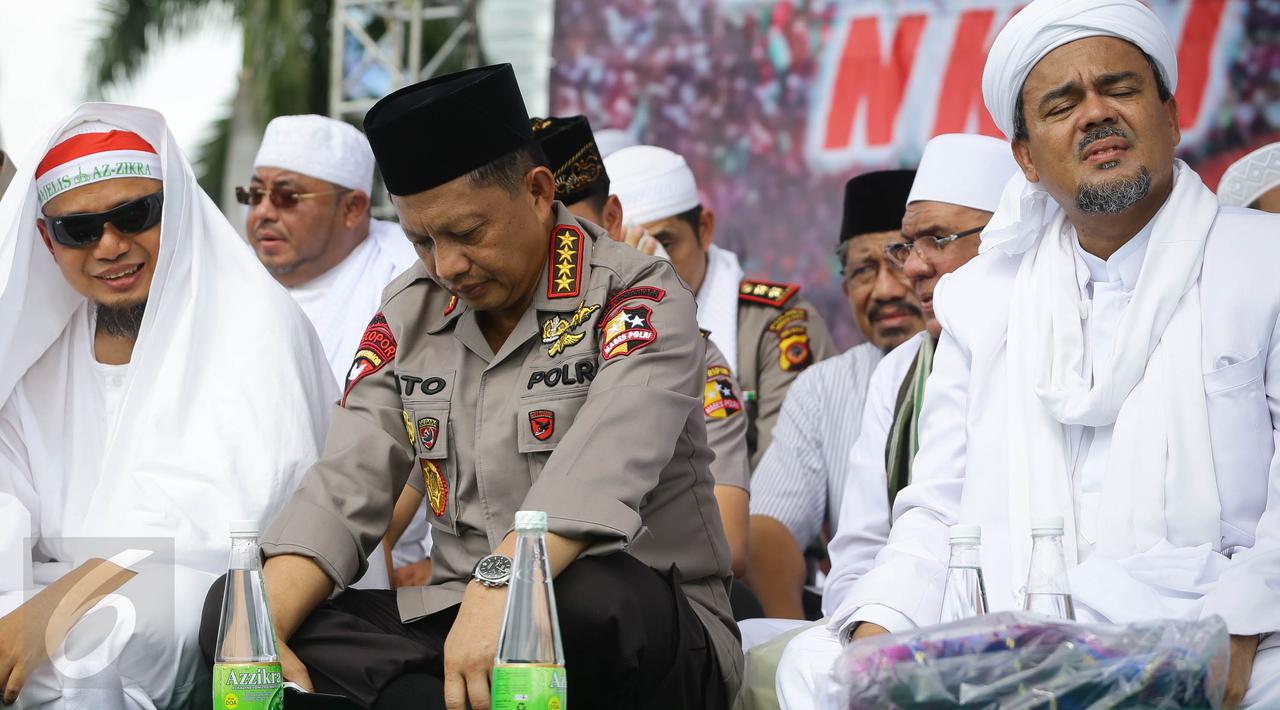 Then-police general Tito Karnavian (center) is accompanied by the preacher Muhammad Arifin Ilham (left) and cleric Muhammad Rizieq Shihab (right), both of whom are often accused as radicals, during the Action for Defending Islam on December 2, 2016. Photo from Wikimedia Commons.

To mainstream human rights ideals for devout believers, activists need to speak in the same language and, as shared by religious studies scholar Leonard Chrysostomos Epafras in EngageMedia’s research, develop a ‘humanistic theological infrastructure’. Citing the United States as an example, Epafras said that the enduring strength of racist ideas in the United States stems from the fact that such ideas are deeply entangled with the concept of the great chain of being, which was pervasive in Western thought, and imbued with religious meaning: that Christian Anglo-Saxons are made in God’s image, and the rest are His imperfect creations. Christianity itself is not inherently racist but is reinterpreted to support racist ideas. Even when the religious mythos fades, its secularised forms persist.

Epafras argued that something similar can be done in Indonesia, but in a way that instead respects human rights. Taking cues from Epafras’ call, I think activists need to consider recontextualising narratives from the life of Prophet Muhammad himself – to demonstrate that he lived a life reflecting the ideals that Muslims should embrace. Such stories are powerful because they are chronicled in hadith, a collection of the prophet’s sayings and deeds as documented by his followers.

Collaboration will be needed in this approach, not only because human rights activists are unequipped to delve into the intricacies of hadith comprehension and recontextualisation, but also because the people who do have the expertise – Islamic scholars and religious leaders – are able to command what many activists cannot: authority. An interpretation of hadith only possesses authenticity when it is cited and argued by a person considered authoritative to interpret and speak it in such a way.

To speak of authority is also to speak of a community. Religious authority, as anthropologist Ismail Fajrie Alatas explained, is not coercive. It “rests neither on common reason nor on the power of the one who commands, but on the recognition of the hierarchy deemed by all parties involved to be right and legitimate”. A mastery of theology is not enough to be influential in propagating shared languages and practices of religion if one does not have a community that considers them legitimate. For instance, hadith that endorses entrepreneurial ethics may resonate with a community led by a businessman preacher, but may seem strange to a community of displaced farmers.

This is partly the reason why I have doubts about the effectiveness of “narasi positif’ (positive content)” which has become a common campaign, especially on social media, by both government and CSOs to challenge hate in Indonesia. The campaign hinges on spreading upbeat messages on “good” human rights and diversity and “bad” intolerance while, at the same time, preaching against hatred to uphold the unity of the Indonesian nation. But this approach either preaches to the choir or falls on deaf ears, neither addressing a specific community nor making use of the legitimacy that religious authorities command. As Islamic scholar Ulil Abshar Abdalla noted in the EngageMedia report, there has not been enough critical reflection in this regard. Too much attention is given to dramatic cases of violence and discrimination, the kind that makes good headlines and, again, perpetuates the embedded saviour mentality.

But upon closer inspection, there are already grassroots organisations that have moved away from moralistic duality narratives of good Muslims against bad Muslims. For example, Young Interfaith Peacemaker Community provides spaces for interfaith dialogues that include both conservatives and progressives. Another organisation, Yayasan Prasasti Perdamaian invites former radicalised Muslims to speak about their firsthand experience.

Rather than a multitude of one-off isolated online “campaigns”, CSOs and human rights activists need to work more closely with religious authorities and treat them as true partners, recognising and respecting their knowledge and expertise and asking critically what is actually important for them. Campaigns on social media – or outside social media – have to be articulated by religious authorities to more effectively speak and resonate with the people. CSOs have to cultivate communities and stories, to think outside the jargon and concepts used by international development organisations, donors, and programs. A more context-sensitive approach that acknowledges the authority of religious leaders and scholars is needed, so we can reduce this gap and allow our aspirations to resonate with the Indonesian public.

1 thought on “Beyond memes and social media campaigns: How do we talk about religion and human rights?”