In recent years, there has been a rise in hate speech across the world, facilitated by the use of digital tools in online spaces. To raise awareness on the destructive impact of hate speech and inspire collective action, the United Nations has declared June 18 to be the International Day for Countering Hate Speech.

EngageMedia is supporting the Association for Progressive Communications’ (APC) two-day campaign to highlight how hate speech impacts some of the most vulnerable communities in Indonesia, and what can be done to counter it. The campaign aims to encourage conversations around the issue on social media, and share research, resources, and other content that explore the topic further.

Learn more about the campaign here. Support the #NoToHate and #ChallengeHateOnline campaigns by using the multimedia materials here.

This is part of EngageMedia’s larger collaboration with APC for the “Challenging hate narratives and violations of freedom of religion and expression online in Asia” (Challenge) project. 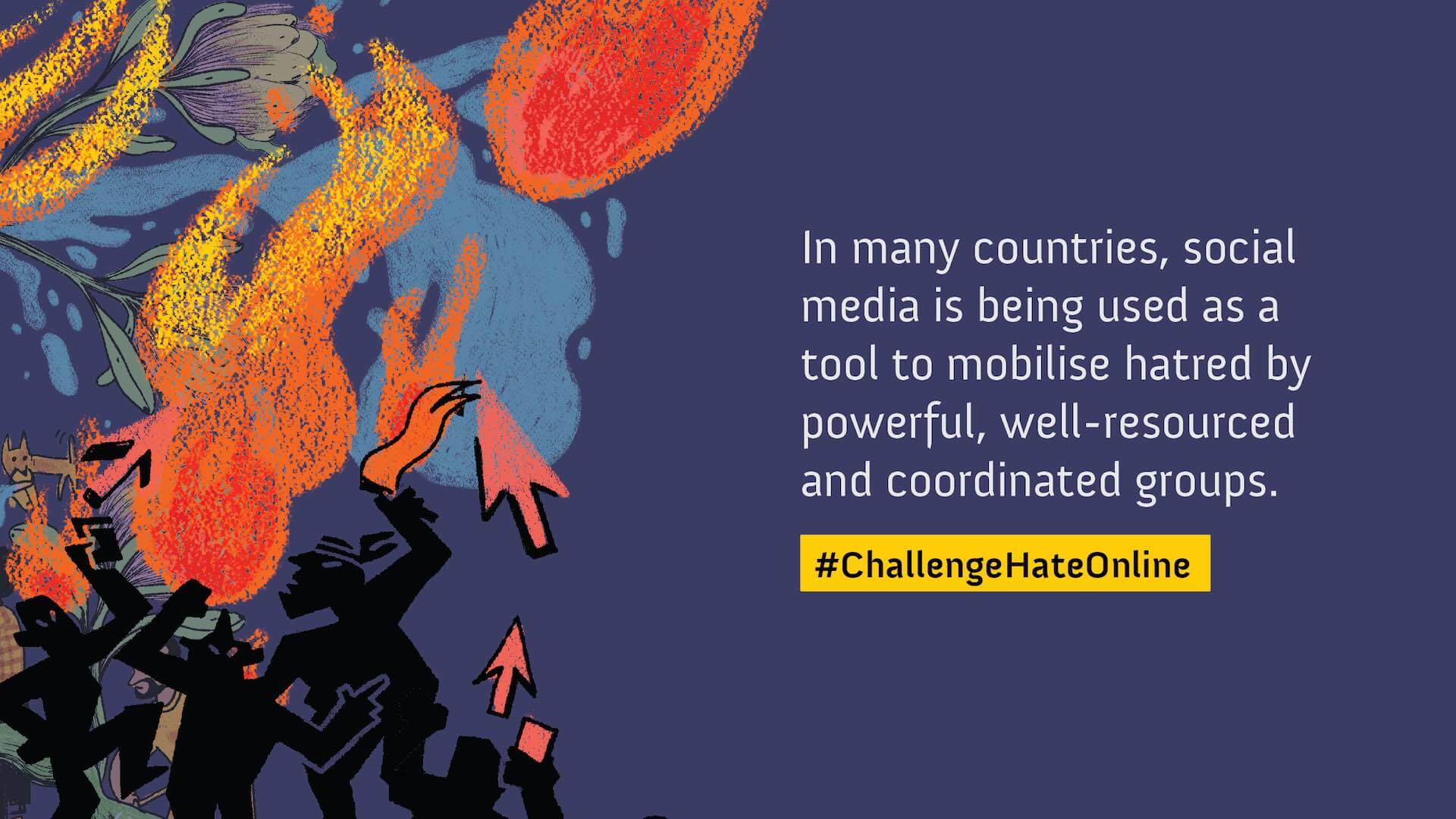 To support #NoToHate and #ChallengeHateOnline campaigns, EngageMedia highlights the impact of hate speech on vulnerable communities, especially youth and minoritised religious groups. While both are considered at-risk communities, the effect of hate speech can be vastly different for the two groups. Cases in Indonesia show that hate speech mostly targets young people, often leading to radicalisation using extremist narratives. Against practitioners of indigenous beliefs, hate narratives can prolong minoritisation. Not only are these people already marginalised compared to other religious groups, they are also subjected to discriminatory laws and have limited to no access to public services.

In partnership with renowned production house WatchDoc, EngageMedia scrutinises the struggles on minoritised religious groups in the documentary titled Lara Beragama Di Mayantara (The Hurtful Religious Cyberspace). The short documentary follows the story of Sapta Darma and Aliran Kebatinan Perjalanan as they continue to experience religious-based discrimination despite a Constitutional Court ruling in 2017 that allowed adherents of indigenous religions to specify their beliefs on their ID cards.

In partnership with KBR Prime, EngageMedia spoke to terrorism expert Al Chaidar and Leonard C. Epafras from the Indonesian Consortium for Religious Studies (ICRS) to discuss young people’s vulnerability to recruitment into terrorist groups, often through online means such as social media, messaging applications, and online videos. The podcast episode highlighted the importance of understanding the process of radicalisation – one case involved a teenage girl who was first exposed to radical online narratives through fashion and ended up bringing 26 members of her family to Syria to join the Islamic State. The discussion also explored how to protect Indonesian youth against radicalism and extremism online.

Listen to the podcast on the KBR Prime site. 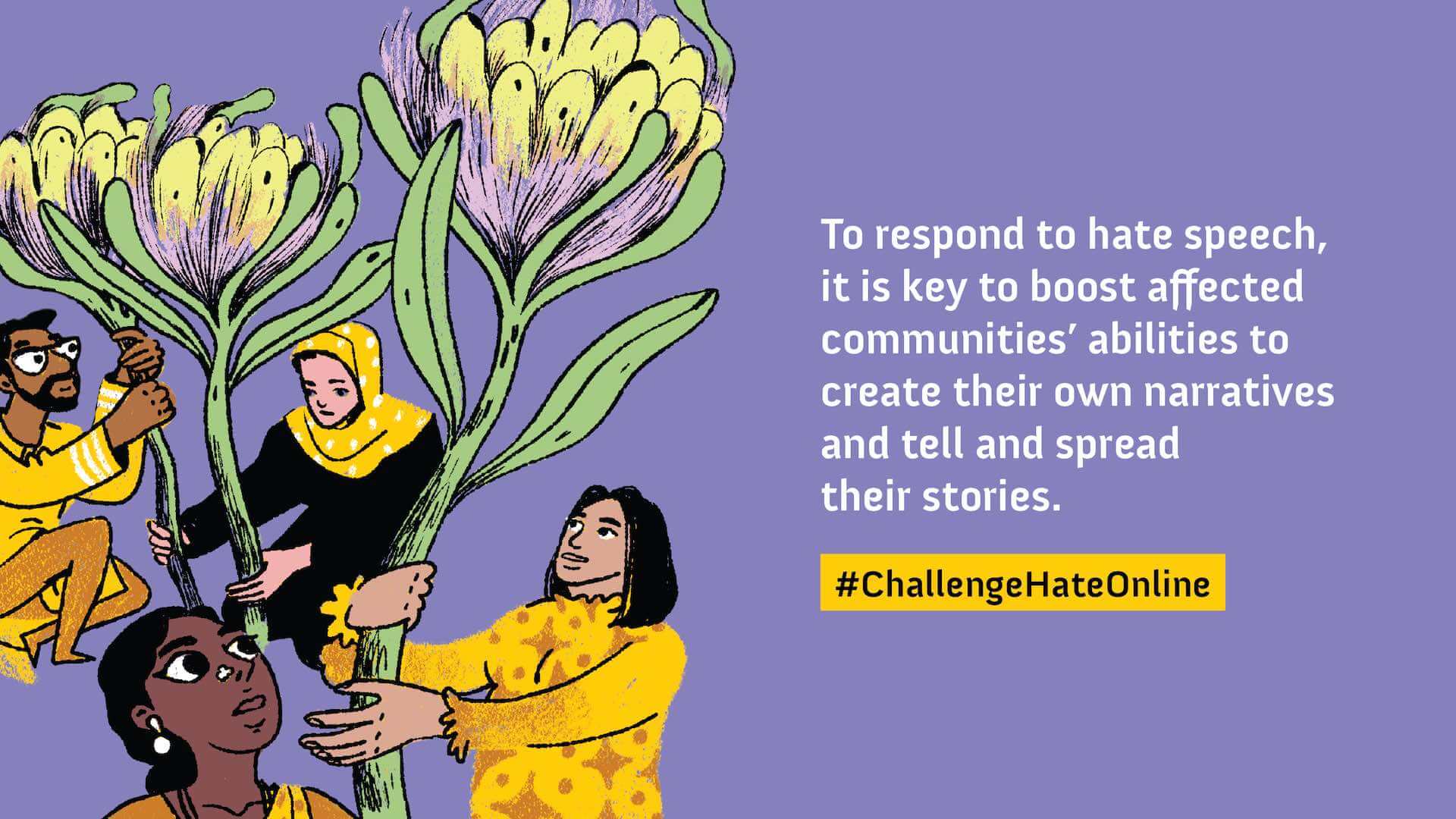 To counter hate speech, it is important to raise awareness about the issue, understand why and how it manifests, and explore creative ideas for pushing back against hate narratives. EngageMedia has conducted research on hate speech related to freedom of religion or belief (FoRB) and freedom of expression (FoE) online. We also highlight the work of artists and communities who have demonstrated resilience against hate narratives online.

In partnership with Diani Citra of Sintesa Consulting, EngageMedia produced a report that looks into Indonesia’s history, socio-cultural landscape, and regulations that impact digitally mediated religious expression. The report titled “In the Name of Religious Harmony: Challenges in Advancing Religious Freedom in Digital Indonesia” highlights the unequal ability to exercise religious expression in Indonesia, how laws meant to protect FoE and FoRB reinforce majoritarianism values centred around Islamic norms, and how online platforms amplify religious intolerance. The report pushes for a grounded humanistic “theological infrastructure” in addressing religious polarisation and offers recommendations for civil society, government, and the private sector.

In an episode of Pretty Good Podcast, EngageMedia spoke to Noor Huda of Kreasi Prasasti Perdamaian about his work with youth and Indonesian migrant workers to tackle radicalism and extremism online. He emphasises the need to understand the radicalisation process and offer safe online spaces for vulnerable groups through Ruangobrol and RuangMigran. Listen to the podcast episode here.

Another Pretty Good Podcast episode featured writer and artivist Feby Indirani who shared her work on challenging hate narratives through her “Relax It’s Just Religion” movement. She talked about her experience discussing religion through the lens of ‘magical islamism’ and dark humour through her books “Not Virgin Mary” and “Hunting for Muhammad“. Listen to the podcast episode here.

We invite people in Indonesia and other countries to join the #NotoHate and #ChallengeHateOnline campaign and spread the word to your networks.

1 thought on “#ChallengeHateOnline: Countering the impact of hate speech”