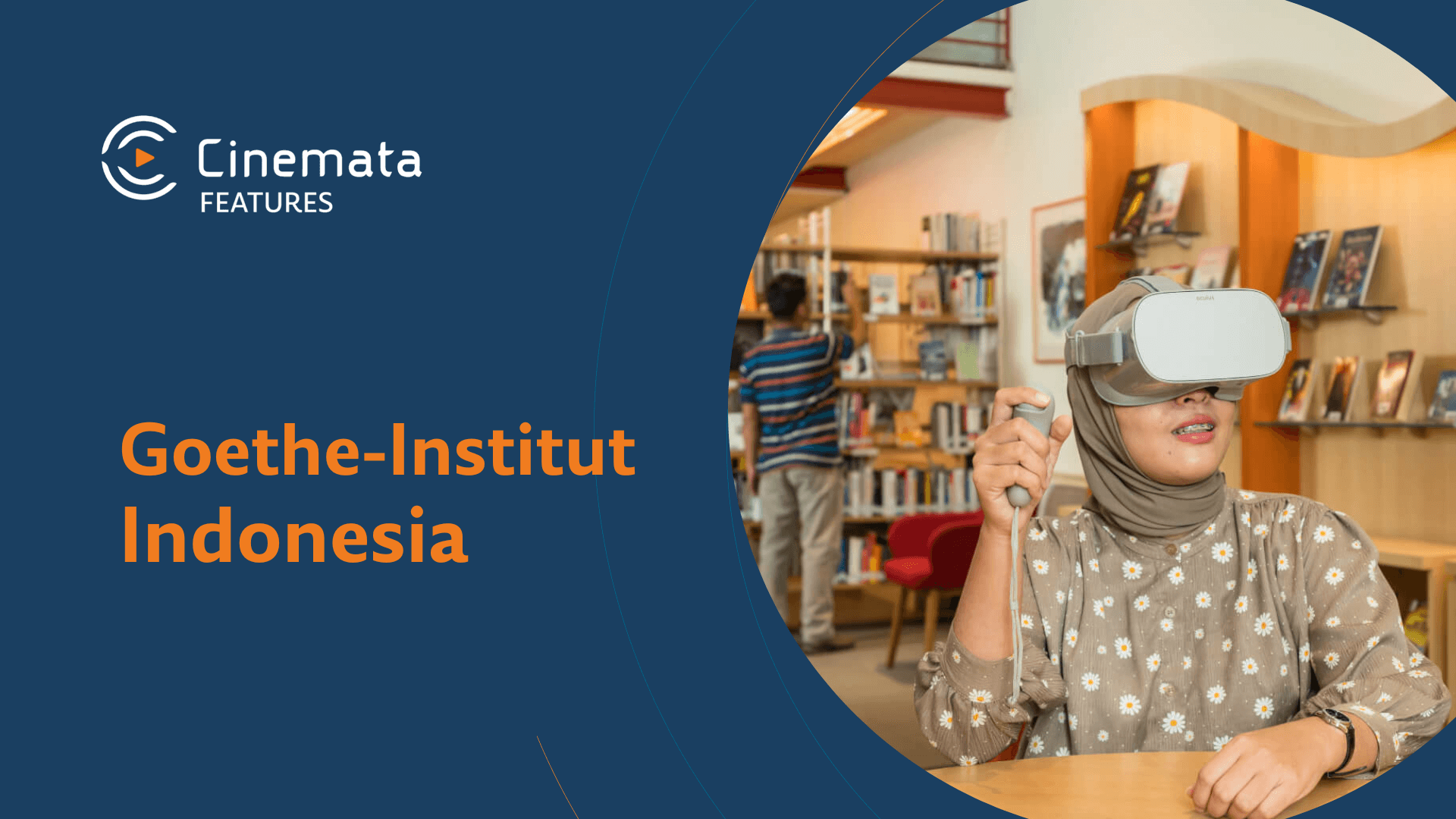 ‘Cinemata Features’ is a series that highlights film practitioners in the Asia-Pacific – filmmakers, film groups, curators, critics, and archivists – who create and disseminate social and environmental issue films in the region.

The second post in the series features Goethe-Institut Indonesia. As Germany’s cultural institute, the organisation actively promotes information on German culture and language for an international audience. Their work has initiated intercultural encounters, collaboration, and co-creation through various cultural programs such as film screenings, concerts, exhibitions, performances, and workshops in which Indonesian and German artists create, exchange, and perform together.

Since 2019, the institute has conducted the ‘Digital Discourses‘ conference series to stimulate debates on the impact of digital transformation on individuals, economics, politics, society, and ecology. The lectures and panel discussions from all five editions of the conference series are archived and available to watch on Cinemata.

This interview was conducted in January 2023 and has been edited for length and clarity.

EM: In 2022, the Goethe-Institut celebrated its 60th year of working in Indonesia. Could you tell us more about your work in Indonesia, the Asia-Pacific, and beyond, and how it has evolved through the years?

Goethe-Institut Indonesia [GI]: In Indonesia, we are present with institutes in Jakarta and Bandung, as well as a Goethe-center in Surabaya. In addition, we organise programs in other cities across the archipelago – also beyond Java. Our programs range from a music festival (Alur Bunyi) and film festival (Science Film Festival) to conferences (Digital Discourses).

As the regional office for Southeast Asia, Australia, and New Zealand, Goethe-Institut Indonesia is keen on organising cross-border programs that examine issues of relevance to the region. These include smart cities, artificial intelligence, the future of media, postcolonialism, and feminism.

Our cultural projects have brought together different regional perspectives and provided spaces for dialogue. For example, the public forum “Postcolonial Perspectives from the Global South” brought together curators, sociologists, and historians from South America, Africa, South Asia and Southeast Asia to explore the various trajectories of modernity as understood and experienced from a range of philosophical, cultural, and historical perspectives. The project “Movements and Moments” sheds light on Indigenous feminist activisms from the Global South in the form of comics.

Looking back, we share an enormous inventory of bi-lateral experiences that have allowed us to build trust and generate new ideas in an ever-changing environment.

We realise that the world around us is constantly evolving, and we must adapt to these changes, especially concerning digital technologies that have transformed many aspects of our lives. For example, our library has moved away from being a place to store and access information to providing a space for people to interact with collection items (books, DVDs, CDs) or physical devices (VRs, gaming consoles, board games). Access to the library is not only confined to the physical space but has expanded to more than 35,000 titles of ebooks, films, and magazines for German learners and literature enthusiasts through Onleihe, our online library. Also, our language courses are available both online and offline. 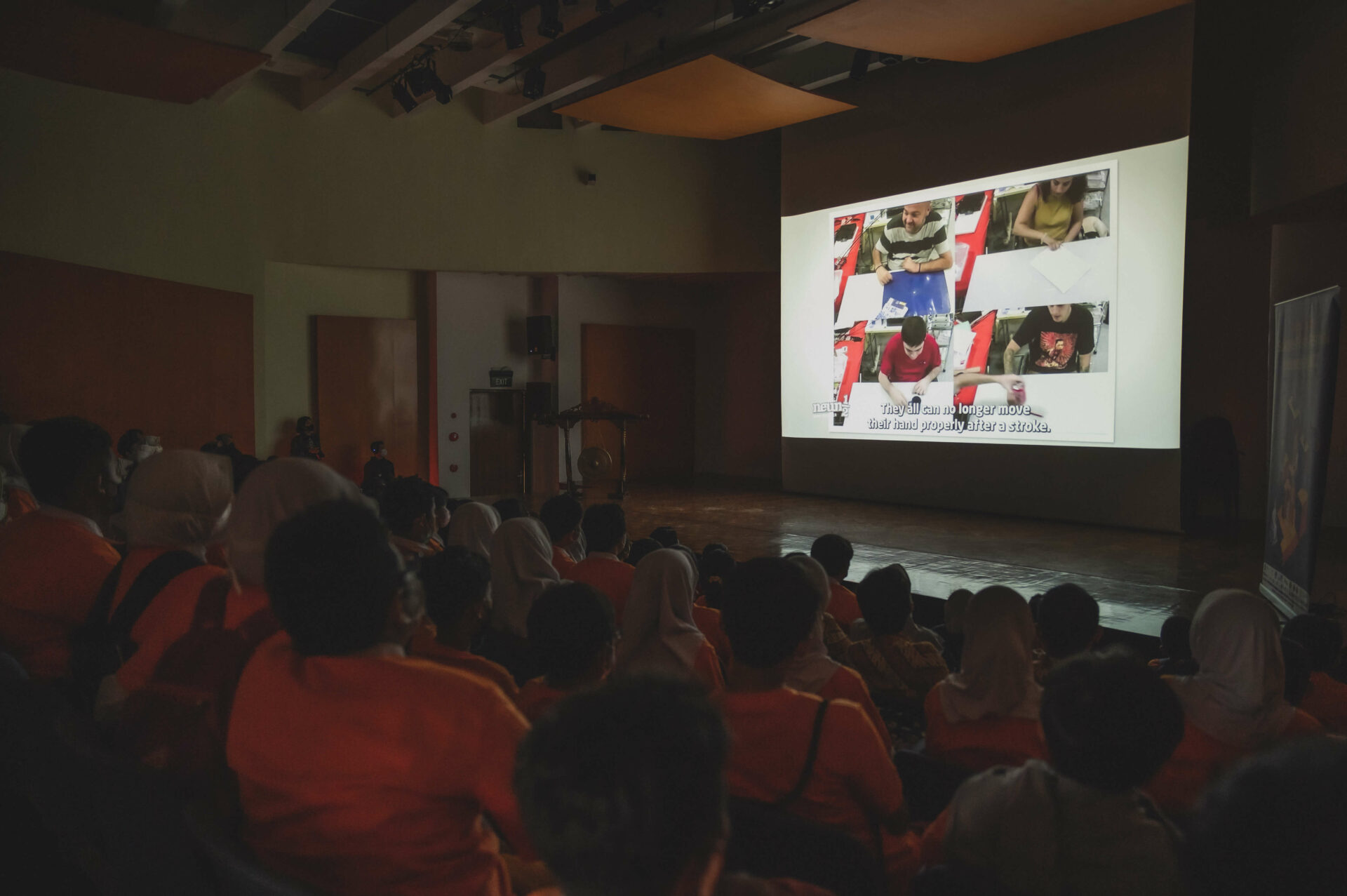 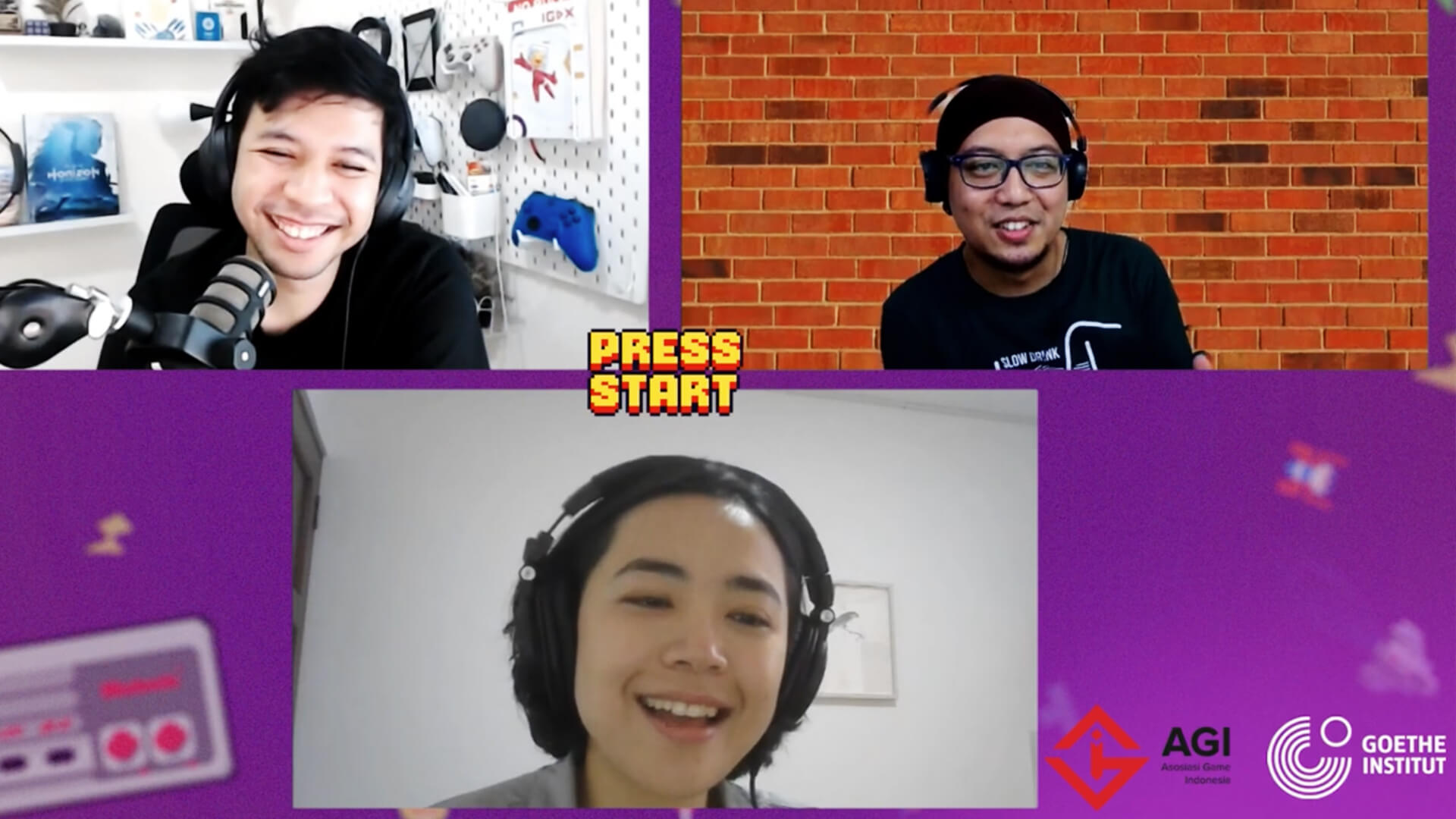 GI: The “Science Film Festival” has consistently promoted scientific literacy to young people in Southeast and South Asia, Africa, and the Middle East via entertaining, knowledge-based communication. In cooperation with local partners, it also facilitates awareness of contemporary scientific, technological, and environmental issues through international films with accompanying educational activities. Aside from promoting science, the festival has a yearly thematic focus that aligns with the United Nations Sustainable Development Goals.

The project has grown considerably since its first edition in 2005, becoming the largest event of its kind worldwide. It started in Jakarta, Indonesia, in 2010. Now, the film festival has expanded its outreach beyond the capital to 55 cities in the country.

“Press Start” is a podcast on how to start a career in the game development industry. It was created in collaboration with the Indonesian Game Association (AGI) and produced 45 episodes. It features guests from the game industry in Southeast Asia and Europe.

Films and podcasts have always been great mediums to inspire and raise awareness. They speak to audiences on a personal level and expose them to new perspectives. The nature of the medium makes it an engaging and effective way to learn and absorb new information.

EM: Among your various initiatives, one of your most significant focus is the intersection between media and technology. Why do you have a particular interest in this field?

GI: Media and technology are essential in our daily lives and shape how we communicate and consume information. We cannot avoid its influence and prevalence in our society. Its impact on the economy, culture, and the individual is a topic of global relevance. We have seen how new opportunities are created from the emergence of new technologies. But at the same time, ongoing digital transformation raises social, ethical, and political questions. These are pressing issues that need to be examined and renegotiated.

Against this background, Goethe-Institut Indonesia sees digital transformation as an important focus of its work. We contribute to existing debates within the regional network of civil society actors and organisations that work in data privacy, freedom of expression, surveillance on the internet, and ethics of algorithms and artificial intelligence.

We actively promote an exchange of views and foster international dialogue by reflecting on the issue of digital transformation at our conferences, particularly through “Digital Discourses“. 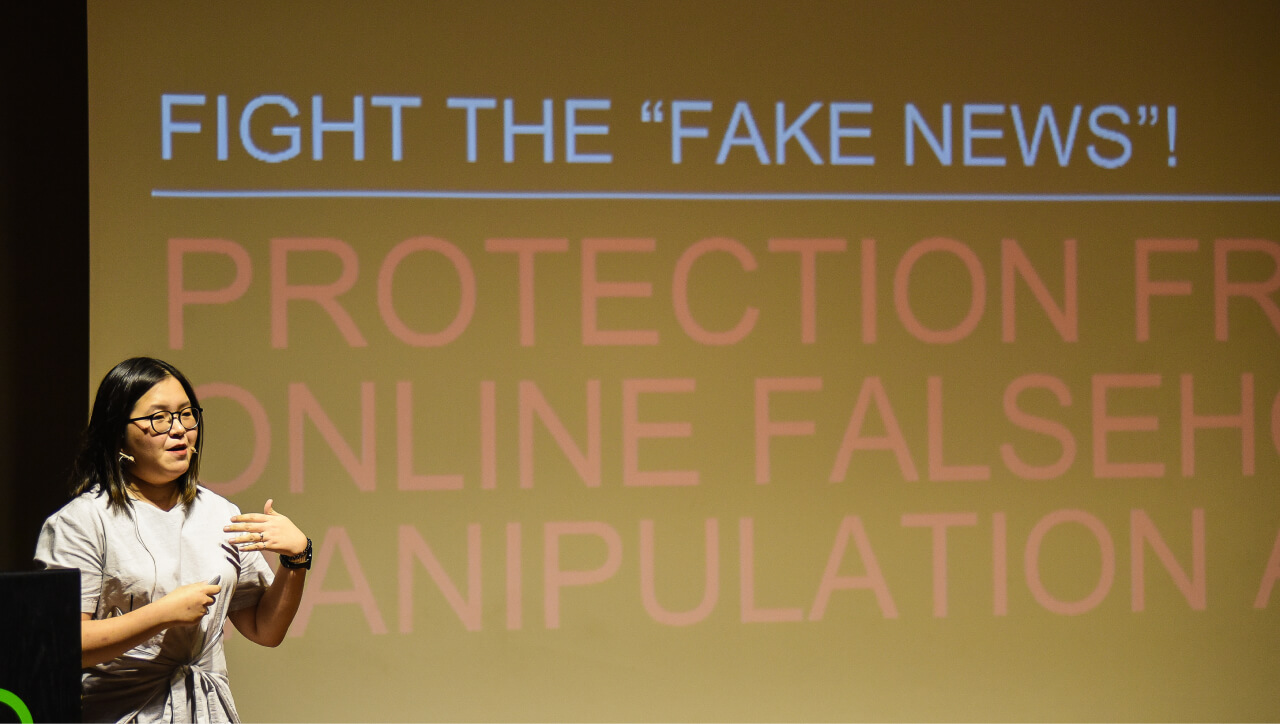 EM: You also have the “Digital Discourses” series where experts from Southeast Asia and Europe examine how future technologies will impact our lives. Can you tell us more about this project, which consists of a hybrid event and a video series documenting the talks?

GI: “Digital Discourses” was initiated in 2019 with the topic “Hoaxes and Extremism on the Internet”. Throughout the years, we have collaborated with various partners and have focused on different aspects of digital transformation, such as the challenges of “Privacy in the Age of Data Capitalism” (2020), “Uniting Civil Society Amidst the Pandemic” (2021), and “Journalism in the Digital Age” (2021).

In the latest edition of the conference series, “Science/Fiction” (2022), we collaborated with EngageMedia and the Center for Digital Society. In this series, we brought to light several scientific breakthroughs transforming the way we live, work, and eat as well as its ethical challenges.

The throughline of the conference series is that technological progress and social changes go hand in hand. Much focus has been heavily centred on the possibility of future technological developments while examining its impact on society still lags behind. This series was created to provoke more exploration and interrogation of the moral, ethical, and societal aspects of technological shifts. 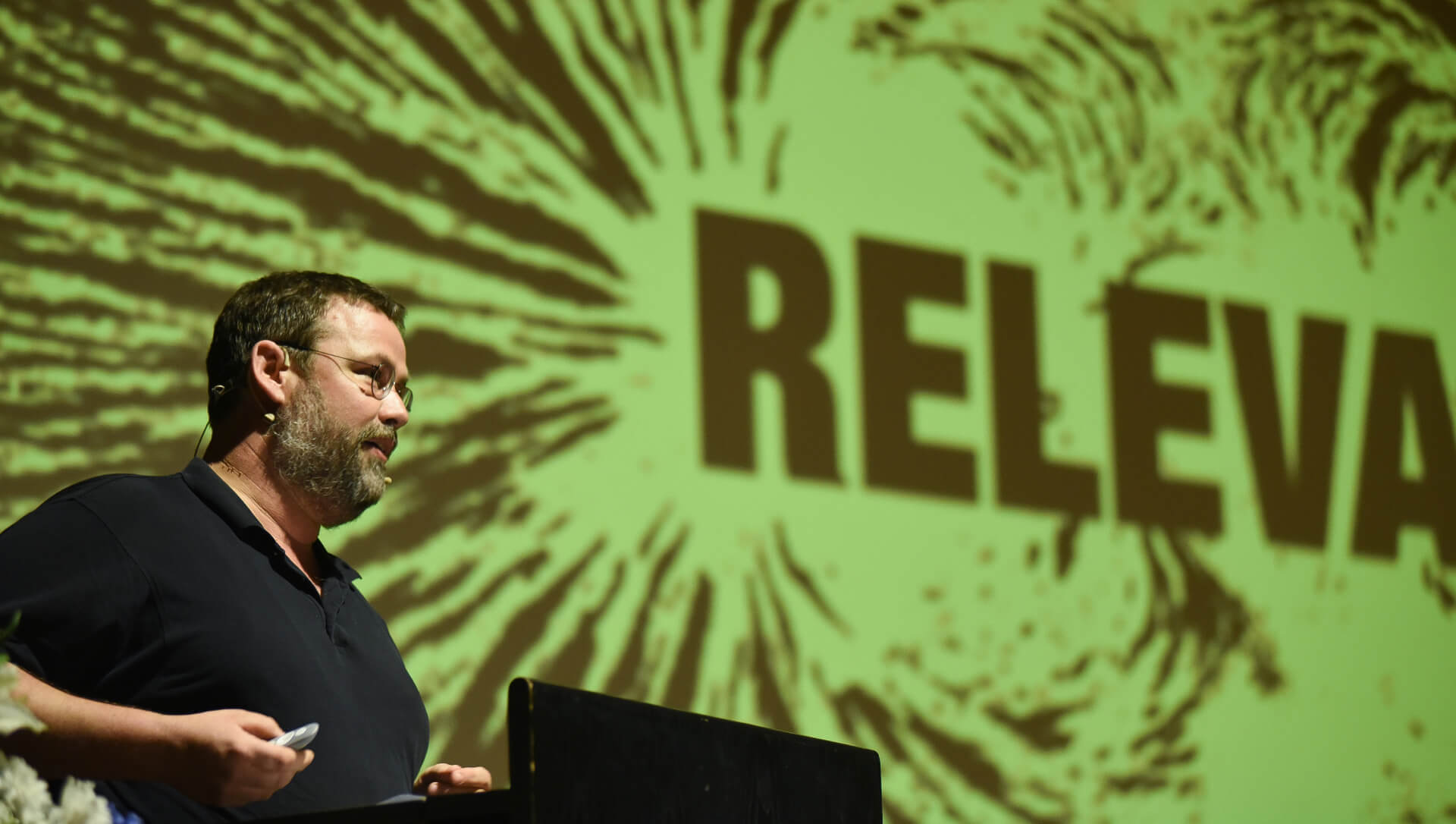 EM: What prompted you to develop this series? What was the process like in deciding the themes and topics that capture pressing media and digital rights issues in Southeast Asia?

GI: “Digital Discourses” was developed against the backdrop of the alarmingly increasing role and power of social media platforms. In Myanmar, the widespread use of Facebook led to the spread of hateful content against Muslim minorities. Across the globe in Germany, the NetzDG or “Network Enforcement Act” was passed as a way to combat fake news, hate speech, and misinformation online. This law requires social media providers to block or remove illegal content. Although such laws are meant to combat hate speech, similar approaches in Southeast Asia, where there is a history of authoritarianism, often serve as a pretext to curb opposition and stifle dissent. With this in mind, we initiated a discussion between experts from the two regions in the first edition of “Digital Discourses”.

We are always in consultation with our partners, civil society organisations at the forefront of media and digital rights issues in Southeast Asia, to decide what themes and topics should be highlighted. With their research and advocacy work, our partners help us to choose the most relevant issues.

EM: How did audiences respond to the Digital Discourse series? What were some of the participant feedback that stood out for you that highlighted the impact of your work?

GI: We have received overwhelmingly positive feedback on the Digital Discourses series. Most participants appreciated our effort to expose the underpinnings of our digital world. “This is very very interesting and terrifying at the same time”, as one participant noted after listening to Katharina Nocun, a civil rights activist, who showed how Facebook and Netflix collected a swath of data from us.

The latest edition introduces futuristic but relevant topics such as a brain-computer interface that are still under-discussed in the region but were able to attract interest in how the technology will develop in the future.

GI: Online distribution is an impactful strategy for outreach. With the help of online platforms like Cinemata, we can reach a much bigger audience than any offline event. While an in-person event is crucial for building networks and connections, online recordings transcend borders and break down financial barriers to attending events. We hope that the videos of “Digital Discourses” are watched by a wider audience, especially since the topics raised in the series are relevant not only to Southeast Asia but beyond, and Cinemata is a video platform that helps us achieve this.

EM: What are the advantages of archiving the “Digital Discourses” series on Cinemata? What are the benefits of Cinemata’s targeted outreach in promoting your work in the Asia-Pacific?

GI: We hope that “Digital Discourses” did not end when the conference ended. The questions raised at the conference could foster further debate and discussion among civil societies across Southeast Asia and inspire action. This is why we believe that making all of the conference series available on Cinemata would be an efficient way to reach out to people working actively and advocating for these issues. Most importantly, the video recordings would serve as a historical archive for researchers interested in documenting the discussion around technological developments and their challenges in Southeast Asia.

EM: What are you currently working on and what’s next for you?

GI: Regarding our focus on digital transformation, we are planning another edition of the “Digital Discourses” conference series in 2023 and other projects in open data and open culture. If you’d like to find out more, visit our website www.goethe.de/jakarta.