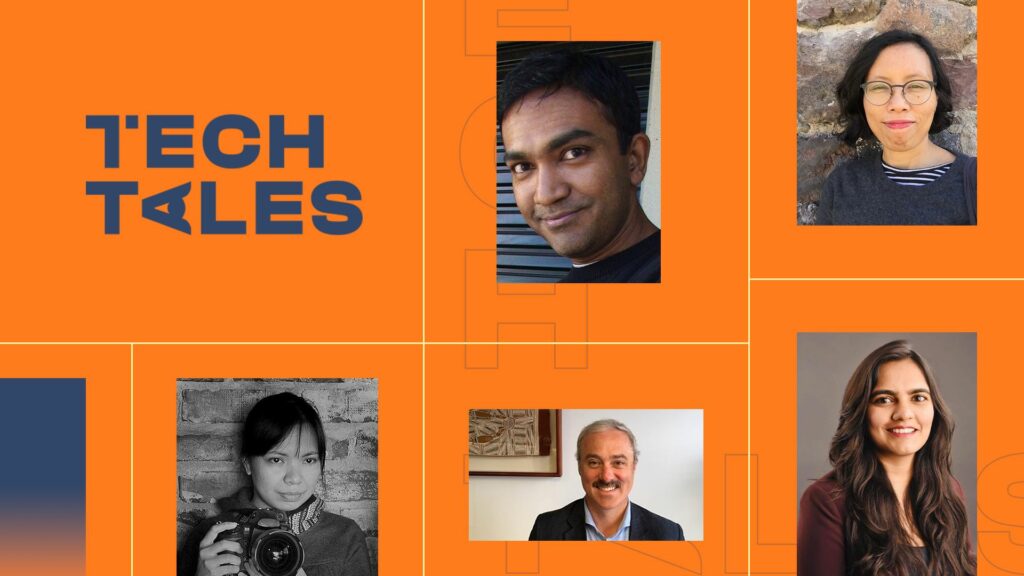 “To be educated and moved, to question and reflect, and to enjoy the power and beauty of art.”

This was how ARTICLE19 Senior Programme Officer Vidushi Marda described the importance of organising Tech Tales: Films about Digital Rights in the Asia-Pacific, a film production and screening project highlighting human rights stories in the digital age. Marda is one of the five members of Tech Tales’ distinguished advisory board, which worked together with EngageMedia and the Tech Tales filmmakers to ensure the films’ accuracy in depicting digital rights issues.

Featuring works from noteworthy filmmakers across the region, the eight films in the Tech Tales collection cover stories ranging from online gender-based violence in Indonesia; the rise of disinformation in the Philippines and Myanmar; blatant attacks and repression of artists, journalists, activists, and members of minority groups in Cambodia, Thailand and Malaysia; online surveillance and data privacy issues in India; and the push for data sovereignty and decentralised data flows in Australia.

Since its launch last October 2021, the films have raised awareness on key digital rights issues in the region through community screenings held in the Philippines, Indonesia, and Myanmar. The collection was showcased in last year’s Human Rights Day celebrations, including the Cultural Center of the Philippines’ Rights Out Loud and EngageMedia’s own special screening on Cinemata. Several films were also selected for screening in the Indonesia-based 100% Manusia Film Festival, the Feminist Festival 2021 organised by Jakarta Feminist, and the Digital Revolution and Human Rights Film Festival for audiences in Myanmar.

To ensure that more audiences are able to watch the films, EngageMedia is actively looking for community screening, media, educational, and advocacy partners. More information on the films is available in the screening guide, containing synopses for all eight films and statements from the filmmakers. To learn more about the films and partnership opportunities, visit the Tech Tales project page.

The Tech Tales advisory board comprised regional experts from the fields of digital rights and documentary filmmaking. Marda, a lawyer investigating the societal impact of artificial intelligence systems, said she was excited to be part of Tech Tales “because films can centre the human experience of technology in a compelling way”.

“They’re beautifully made, and do not shy away from uncomfortable and difficult topics. It’s an impressive collection and I definitely learnt a lot from watching them,” she added.

Fellow advisory board member Dr. Adam Fish agreed. A Scientia Associate Professor in the Faculty of Arts and Social Sciences, School of Arts and the Media, at the University of New South Wales, Dr. Fish noted the films’ “remarkably sophisticated filmmaking, storytelling and editing with a political drive, ambition and bravery”.

For Dr. Fish, the importance of initiatives like Tech Tales in advancing digital rights in the region cannot be overstated.

“Today, democracies are on the decline on continents where they once emerged and flourished. The countries of Southeast Asia have long had an ambiguous relationship to human rights, freedom of speech, and democracy itself,” he added.

“Told through a wide range of filmic styles and voices, the collection is an interesting glimpse into [the] diversity, interconnectedness and parallel urgency of experiences across eight neighbouring countries,” Maranan said.

For her part, Dr. Veronika Kusumaryati noted with approval the critical stance that all the films took towards both Asia-Pacific governments and social media companies such as Facebook and Twitter.

Dr. Kusumaryati is a political and media anthropologist working in West Papua, and holds a PhD in anthropology with a secondary field in Film and Visual Studies from Harvard University.

“Using artistic means, such as animation and experimental documentary, the collection amplifies issues of data protection, disinformation, and surveillance faced by civil society groups, minorities, and those marginalised by mainstream societies,” she added.

Sam de Silva, an advisor to the secure-tech not-for-profit Loki Foundation and a former board member of Australia’s Digital Rights Watch, noted the diversity of the issues that the films tackle.

“These personal stories will hopefully inspire others – especially young people – to consider the negative aspects of digital technologies, and become more aware of protecting themselves from threats not just by the state, but also from people they know on a personal level,” he said.

What struck them most

When asked about the particular films that struck them most, Dr. Kusumaryati said she found all eight films compelling, and gave examples of how each of the films made an impact on her.

For instance, she noted the dearth of films about the struggle of Malay Muslims in Southern Thailand, and the importance of Vijitra Duangdee’s Pattani Calling in bringing this issue to light to Asia-Pacific audiences.

“(It) is another example that shows how an authoritarian state uses the internet and digital technology to control dissent and suppress freedom of information for minorities,” Dr. Kusumaryati said.

Dr. Fish, for his part, said he was struck by the intimacy of Jackson Brook’s Not Love Songs. A story about a Cambodian rapper jailed by authorities for his lyrics deemed critical of the government, the film was “told exquisitely through interviews with his father and sisters with an evocative soundtrack by the artist”.

Meanwhile, Marda said the film by an anonymous filmmaker from Myanmar was particularly compelling. “Black Out had me at the edge of my seat because it centres the human experience and anxiety around shutdowns,” she said. Black Out tells the story of a mother and her activist daughter caught in the backdrop of fabricated stories and unreliable information in the aftermath of the 2021 Myanmar coup. (Related reading: Tech Tales films inspire youth at Myanmar human rights film festival)

Dr. Kusumaryati also noted the “high level of sophistication” evident in Indian filmmaker Varun Kurtkoti’s Appa and His Invisible Mundu. “The film makes the issue of data protection more digestible for non-specialist audiences. I believe that this film can be used as an effective educational tool and that it can raise our awareness on the importance of data protection today,” she added.

The advisory board members called on the public, especially those in the Asia-Pacific region, to watch all the films in Tech Tales.

Dr. Fish said Tech Tales is a great occasion for these filmmakers to express themselves and their deep-seated concerns about digital rights issues, including freedom of speech online, digital privacy, online surveillance, and other issues.

“The films in the collection are simply good films and they deal with important issues of our lives. The films will help us better understand issues, like disinformation and online gender-based violence, and thus can strengthen our efforts to fight for a better and just society,” Dr. Kusumaryati added.

Marda said projects like Tech Tales should be supported and celebrated for “exploring stories and working with filmmakers across Asia-Pacific, which is a layered, complex and fascinating region that doesn’t always get the granular attention it deserves”.

For her part, Maranan said, “It was a great pleasure for me to be part of the advisory board and give creative advice to very talented filmmakers and colleagues. I hope the project widens the way for new modes of film collaboration and exchange within the region.”

The Tech Tales film collection will be showcased at various festivals and community screenings within and across the Asia-Pacific. To stay updated about Tech Tales, and to learn more about screening and media partnerships, visit the Tech Tales project page.