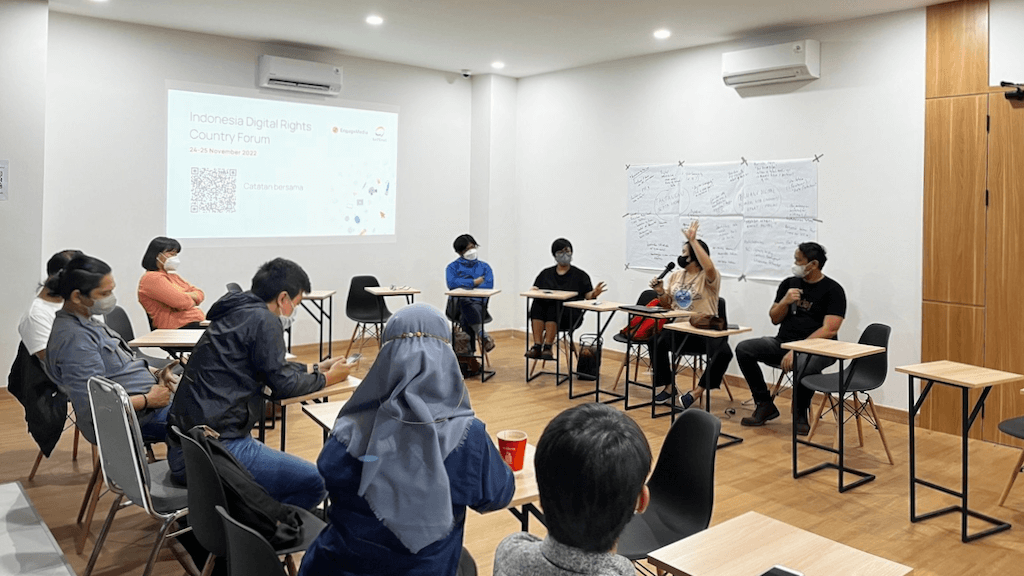 During the Indonesia Digital Rights Forum, participants from civil society organisations, academe, media, and government highlight the need to pay attention to the work of organisations outside Jakarta and learn from past success stories of rights movements.

Disinformation, online gender-based violence (OGBV), censorship and information control on online platforms – these are just some of the key issues and challenges faced by digital rights actors in Indonesia. During the Indonesia Digital Rights Forum held last November 24 and 25, participants stressed the need for multi-stakeholder and intersectoral collaboration and providing adequate support for activists to address these shared challenges.

Organised by EngageMedia in partnership with the Southeast Asia Freedom of Expression Network (SAFENet), the two-day event convened over 60 participants from civil society organisations (CSOs), academe, media, student collectives, and government. The forum allowed participants to discuss issues such as OGBV, youth and social media activism, disinformation, internet censorship, and information control, among other topics.

The forum also featured a screening of the documentary Lara Beragama Di Mayantara (The Hurtful Religious Cyberspace), which scrutinises the religious-based discrimination faced by adherents of indigenous religions. The film was produced by EngageMedia in partnership with production house WatchDoc.

Much like the other digital rights country forums convened by EngageMedia, the Indonesia event provided a space for CSOs working on various advocacy issues to come together and discuss how they can collaborate on solutions to some of the most pressing digital rights problems in the country.

A recurring sentiment throughout the forum was the emphasis on multi-stakeholder and intersectoral collaboration and the need to provide adequate support to activists. Participants said that by engaging in meaningful collaboration, the work of awareness-building and influencing policy would have a greater impact.

For instance, in the work surrounding OGBV and digital security issues, too little attention is paid to the initiatives of collectives and smaller CSOs operating outside Jakarta. This tends to omit a deeper awareness and understanding of the lived realities of people outside this ‘Jakarta bubble’, affecting how relevant or impactful certain interventions and initiatives can be.

Ellen Kusuma from SAFEnet also pointed out that advocacy work should involve constant and meaningful engagement and outreach with affected communities. Too often, many research projects on OGBV and other key issues are deemed completed after the research publication or launch. To be truly effective, however, there needs to be a corresponding outreach component, so it reaches policymakers and target communities.

Additionally, participants stressed the need to devote attention and resources towards supporting activists and ensuring they have the means to keep themselves safe, as well as mentally and emotionally ready to handle the demands of advocacy work. In OGBV cases, for instance, the sensitive nature of the cases can often leave a heavy toll on activists. While OGBV survivors rely on activists for help, there is little to no support available for activists working on these issues. Seeking psychological support is still considered taboo, and more work needs to be done to counter the stigma around this.

Lisa Elfena, a University of Indonesia graduate student working on gender issues, cited the case of a colleague who suffered from a heart attack due to stress. Kusuma also added that she herself had gone to a psychologist several times after she became involved in OGBV issues. “This is nothing to be ashamed of. This is not a sign we lost to the world. Sometimes we are in denial that we’re experiencing stress. If in our heads, we’re already considering an exit plan from our work, ask yourself, are you experiencing burnout?” 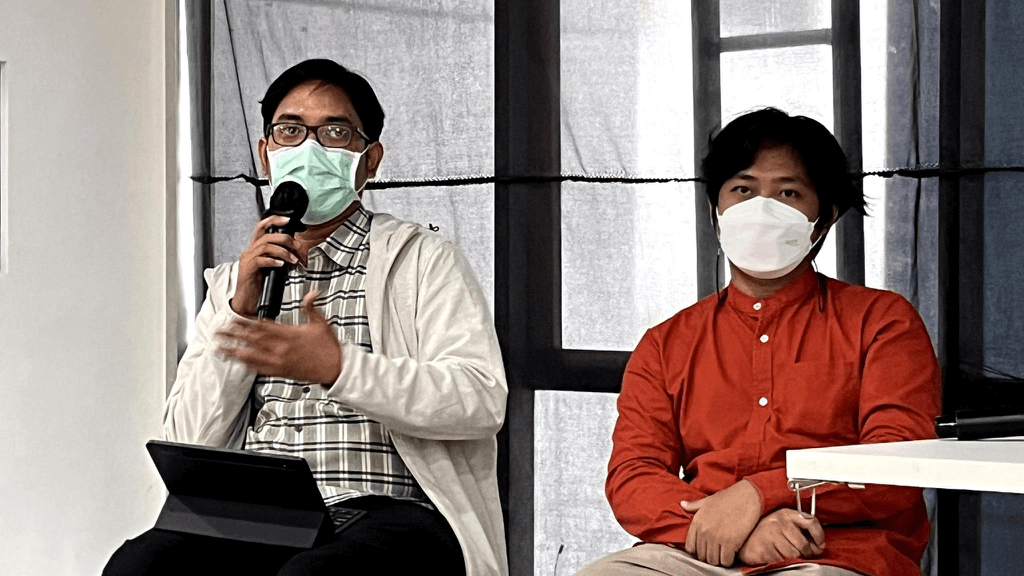 Documenting and learning from past success stories

Shinte Galeshka of Access Now also pointed out that digital rights actors have much to learn from the lessons and successes of previous movements, particularly Indonesia’s long history of activism related to economic and social rights. He argued that digital rights activism in Indonesia needs to be expanded beyond focusing on freedom of expression and connecting the movement to other important aspects of people’s lives.

Galeshka cited the case of the Kendeng movement, which resulted in the successful pushback against mining projects in the region of Kendeng between Central and East Java. While a notable success story for activism, Galeshka argued that the lessons behind the movement remain poorly documented. Learning from such success stories, he said, would be helpful for activists now struggling against government repression.

One participant at the event, Cypri Jehan Paju Dale from Kyoto University, emphasised the need to consider local movements in discussions about civil society. These movements, often not organised under the banner of formal organisations, can be overshadowed by larger groups and are not well-documented. Dale argued that while there are some collectives that attempt to bring attention to these concerns, more effort is needed to amplify their voices, such as by giving more platforms to local influencers.

This ties directly to a point that EngageMedia Digital Rights Program Officer Pradipa P. Rasidi highlighted in his opening plenary on the importance of listening to local perspectives in discussions about disinformation. He pointed out that CSOs often approach grassroots communities with the assumption that they lack digital literacy skills and offer training programs to address this gap. However, the effectiveness of these programs is questionable, as they do not consider the experiences of local communities and their specific concerns.

This is where the insights shared by Dale about the need to consider local movements become particularly relevant. By listening to and engaging with these movements, CSOs can better understand the specific challenges and issues facing communities and develop more effective and contextual strategies for combating not only disinformation but also other challenges faced by the digital rights movement.

The Indonesia Digital Rights Forum concludes the first group of digital rights forums hosted by EngageMedia, following the forums in Thailand, the Philippines, and Cambodia.