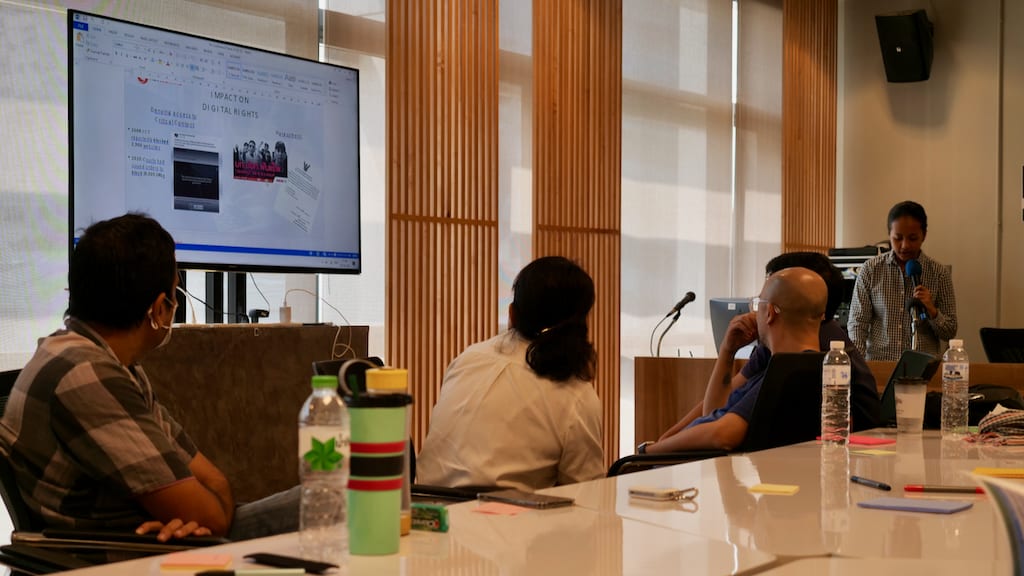 State surveillance and the use of laws penalising freedom of expression are not only undermining the state of digital rights in Thailand, but also eroding the public’s trust in key institutions, according to participants of EngageMedia’s Digital Rights Forum held last October 29 and 30, 2022.

Over 20 rights advocates, technologists, and civil society organisations (CSOs) attended the two-day forum hosted by EngageMedia in partnership with Chulalongkorn University’s Faculty of Political Science and the Social Technology Institute.

The event is the first of four digital rights country forums to be held throughout 2022, leading up to the 2023 Asia-Pacific Digital Rights Festival.

During the forum, participants discussed a variety of topics such as state surveillance, the controversial Computer Crime Act (CCA), freedom of the press, online hate speech, and online gender-based violence. EngageMedia Digital Rights Manager for Mekong Yawee Butrkrawee said that these topics represented the holistic nature of the challenges facing digital rights in Thailand. “The Thai government has been keeping tabs on online discussions and taking action against online critical content it deems affecting national security or public morality”, he added.

The forum provided opportunities for participants to discuss shared challenges and strengthen advocacy around their work. With the Thai general elections coming up in 2023, discussing these concerns has become all the more important.

In November 2021, several Thai activists reported receiving warnings from Apple that they have been targeted by “state-sponsored” attackers. Several months later, more reports surfaced linking the Thai government to the possible use of the controversial spyware Pegasus against dozens of pro-democracy protesters. The possible use of Pegasus raises alarm among the digital rights community, since the spyware is well-known for its various features such as reading and copying text messages, tracking phone calls and location data, accessing the device’s microphone and camera, and harvesting passwords and other information.

At the forum, Thai human rights organisation iLaw shared how they collaborated with DigitalReach and CitizenLab to conduct forensic investigations of those targeted by Pegasus spyware. They found that the use of surveillance tools coincided with the peak of political activities such as protests or assemblies.

Compounding the danger to Thai activists is the controversial CCA, which aimed to tackle undesirable online content but has been mostly utilised to curb dissent among civil society actors. A research report by EngageMedia and the Asia Centre found that the law has been used to deny public access to critical content and was wielded as a weapon by the government against political opponents.

During the forum, participants discussed how legal actions against activists, human rights defenders, and members of the opposition surged with the CCA used as basis. Aside from its impact on stifling dissent among the Thai public, the law also puts pressure on internet service providers (ISPs) to take down content that the government deems critical. This not only limits the creative economy in Thailand but also restricts improvements in internet service and encourages self-censorship. To address this, participants called for amendments to the law and its implementation to avoid infringing on free expression. 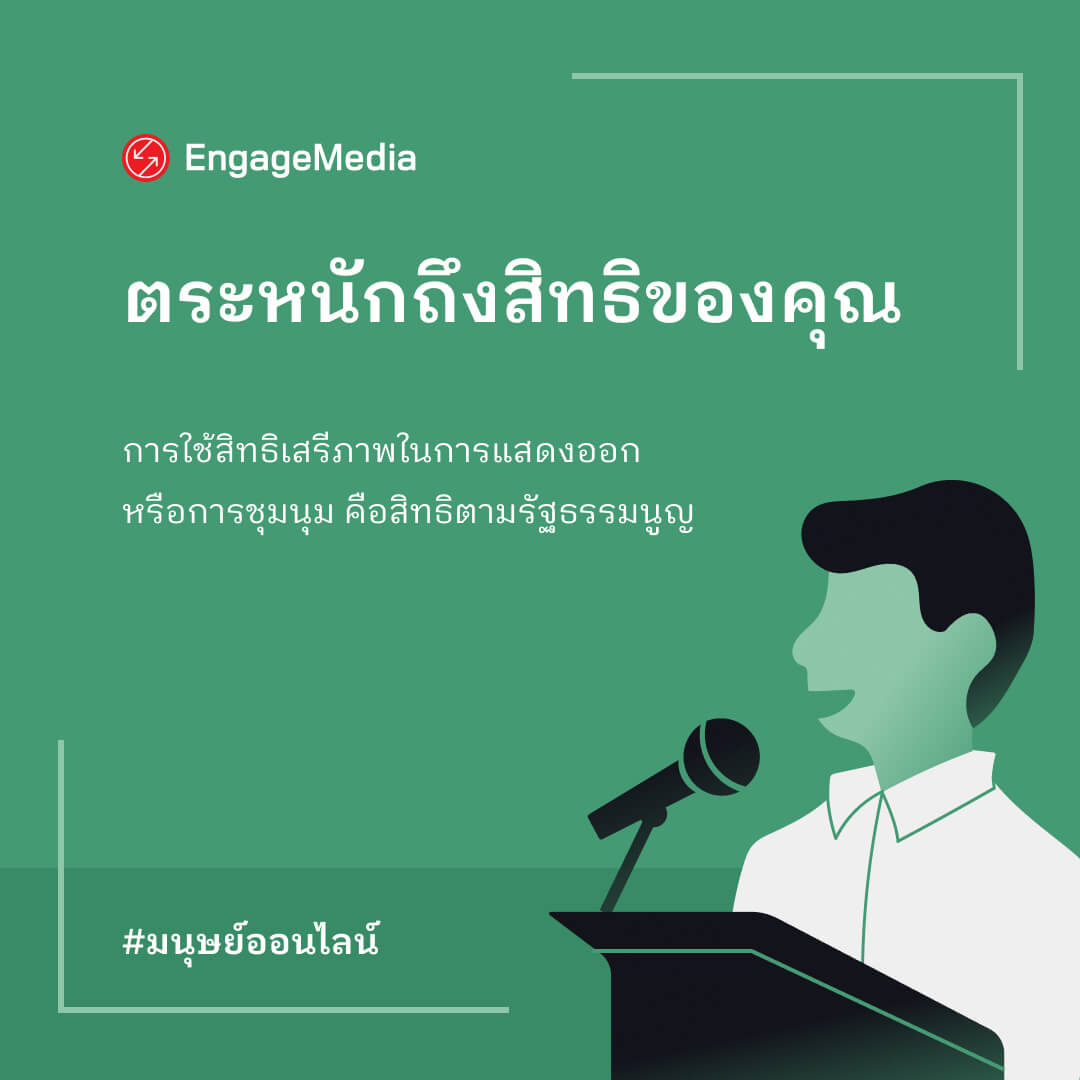 Another topic discussed during the event was the need for the government to be more actively involved in open data initiatives to better engage the public to be part of policy discussions and decision-making processes.

Civic technology organisation WeVis said that while the Official Information Act guarantees people’s rights to access government information, the actual implementation leaves significant room for improvement. Merely allowing information to be disclosed should not be enough; information sharing should also be easily accessible and ready to use. For instance, some information is disclosed via scanned PDFs, making it difficult to extract the data for analysis and use. Additionally, some government agencies are also hesitant to share data with other agencies, resulting in incomplete data sharing.

Participants pointed out that these issues not only encourage a climate of self-censorship among the Thai public to avoid harassment and persecution, but also contribute to low trust in key public institutions such as the courts, law enforcement, and state-run fact-checking organisations. They added that the tension between the government and the public also explains the unwillingness of government agencies to share public data when requested, citing national security.

For the participants, this is an unfortunate development because in times of crisis such as the COVID-19 pandemic, greater transparency and open data can help the government win back public trust and ensure compliance with government policies.

Throughout the event, Butrkrawee encouraged participants to think of themselves as a digital rights working group engaging with political parties and decision makers.

“The goal of the forum is to attempt to consolidate the experiences and works of local CSOs on digital rights in Thailand … With the general election just around the corner, how are we going to present these issues to them and why should they heed our concerns to address it?”, he said.

Amid this picture of shrinking civic spaces and diminishing online freedoms in Thailand, the participants agreed that convening a digital rights working group and facilitating spaces for network-building is very much needed to strengthen digital rights advocacy in the country.

The Thailand digital rights forum is among a series of network-building events that EngageMedia is convening alongside a consortium of partners. In 2023, EngageMedia will host the Asia-Pacific Digital Rights Forum, a three-day regional forum that will create online and physical spaces for changemakers to further discuss and collaborate on solutions to the region’s most pressing digital rights issues today. To be held from January 12 to 14, the forum is the second group of events leading up to the Asia-Pacific Digital Rights Festival in Chiang Mai, Thailand.