Skip to content
The Pandemic of Control, a new series on digital authoritarianism. 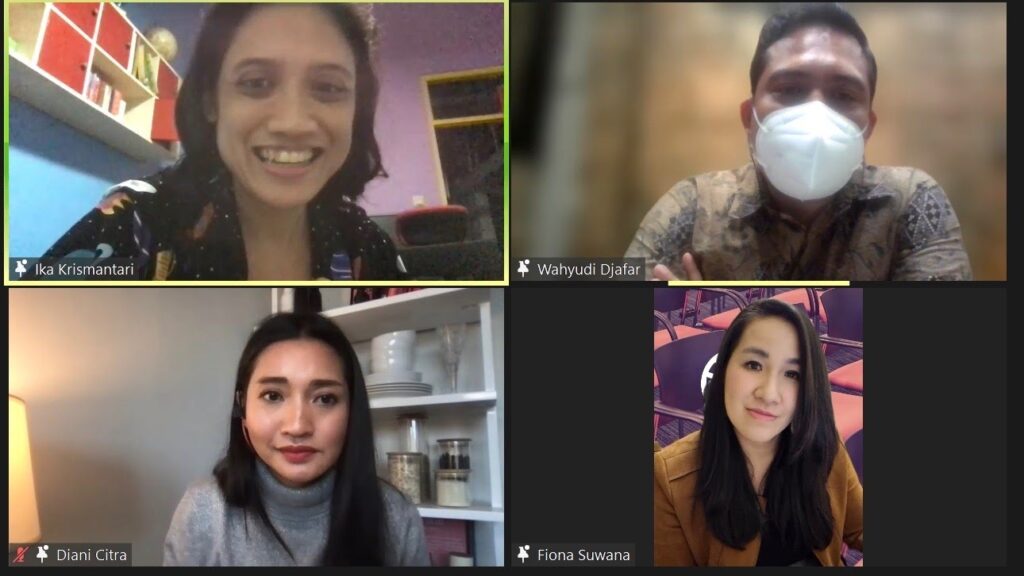 Over 44 digital rights activists and advocates attended the launch event, which featured a discussion among Diani Citra, EngageMedia research consultant; Ika Krismantari, deputy executive editor of The Conversation Indonesia; Wahyudi Djafar, executive director of the Institute for Policy Research and Advocacy (ELSAM); and Fiona Suwana, lecturer from the University of South Australia.

The speakers shared their insights on the state of digital rights in Indonesia, where the space for public discourse has increasingly moved online. One of the key challenges in protecting digital rights was defining the very term. Efforts to provide an understanding of digital rights are like “instructing five blind people to describe an elephant from different perspectives and pieces,” according to Krismantari.

“Digital Rights Report Indonesia 2021” is the result of research conducted by EngageMedia in early 2021, based on interviews with 27 sources from civil society. The findings suggest that the public has varying degrees of understanding when it comes to defining what constitutes “digital rights”; many of these definitions were different from the government’s definition. This lack of clarity in defining “digital rights” is further supported by many corroborating scholars, activists, and other relevant actors in the digital rights space. Not all are familiar with digital-related terms nor do they have a background in the field. Most activists campaigning for digital rights do not solely focus on the cause—instead, they view the advocacy and campaign as a natural extension of human rights evolution. Many come from “conventional” human rights backgrounds, working on issues such as freedom of the press or gender justice, which have penetrated the digital realm as digitalisation progresses.

Most of the interviewees interviewed for the report agreed that the violation of digital rights was an ever-present and imminent threat for everyone active in online spaces. The regulations issued by the Indonesian government have focused more on controlling and limiting movements in the digital space for economic purposes rather than protecting citizens from threats or violations in the digital realm. The controversial Electronic Information and Transactions law, for instance, is arguably more restrictive than protective; the law played a significant role in the prosecution of over 100 netizens with 676 cases from 2016 to 2020.

EngageMedia’s research seeks to provide an overview of the pressing problems faced by civil society actors regarding the fulfilment of digital rights, especially considering how the COVID-19 pandemic has catalysed rapid digitalisation in Indonesia. Academics have pointed out that the current state of digitalisation has aided the acceleration of authoritarian practices through intimidation and political buzzer attacks. They also argued that the present regime allows widespread data collection from unknowing and/or non-consenting parties while simultaneously suppressing civil liberties. The report identifies and focuses on five critical digital rights issues in Indonesia:

The report found that unclear regulations have led to the arrests of journalists and activists, while the lack of clarity in legal processes have often hindered them from exercising their right to freedom of expression online. The criminalisation of digital speech was also identified as a key challenge, impacting not just journalists and activists but also civil society at large.

On media manipulation and disinformation, concerns were raised regarding the difference in treatment between malicious actors and innocent individuals who unwittingly share inaccurate information. Using features on social media such as hashtags and easy message-forwarding, creators of hoaxes prey on individuals who are not as internet-savvy and who are unaware of fact-checking methods to spread disinformation further, such as older individuals, people who live in more rural areas, and middle-to-lower income citizens. The issue of disinformation was a concern during the 2019 presidential election and 2020 regional election, for instance, when the public was involved in spreading disinformation while trying to express their opinion about the candidates.

The high internet penetration rate in Indonesia raises further questions regarding data privacy on online platforms. For instance, when a user data leak occurs, who is responsible – the social media platform or the state? Secondly, how shall the state deal with online platforms that intentionally or unintentionally leak personal data? Citra pointed out that in discussions on digital rights and data privacy, “the assurance, ratification, is performed by the state while the private sector provides the fulfilment.”

The last research finding revolves around various issues related to access: from censorship, which is often carried out unilaterally by the government under the justification of acting for the common good, to disparities in digital infrastructure (digital devices, internet access), which is not equally distributed throughout Indonesia.

During the launch, the panelists reiterated the importance of digital literacy, platform accountability, capacity building, and equitable digital infrastructure development to help uphold digital rights in Indonesia. However, some additional factors need to be considered to implement these proposed solutions, one of which is considering multi-stakeholder efforts to develop internet governance in Indonesia and improve digital literacy among civil society.

For Djafar, choosing which digital governance approach to take in the Indonesian context is not a straightforward process.

He added: “Is it multi-stakeholder? Or paternalistically, [where] the authority is always in the state: there may be FGDs, et cetera, but the consensus remains in the hands of the government? Or do we want to be libertarian: do we want to let a platform with a specific business model be useful for consumers but still be profitable for companies?”

Concerted effort among academics, civil society organisations, and policymakers will be key in co-creating possible solutions and appropriate governance approaches, so that citizens’ rights to freely utilise online spaces will be promoted.