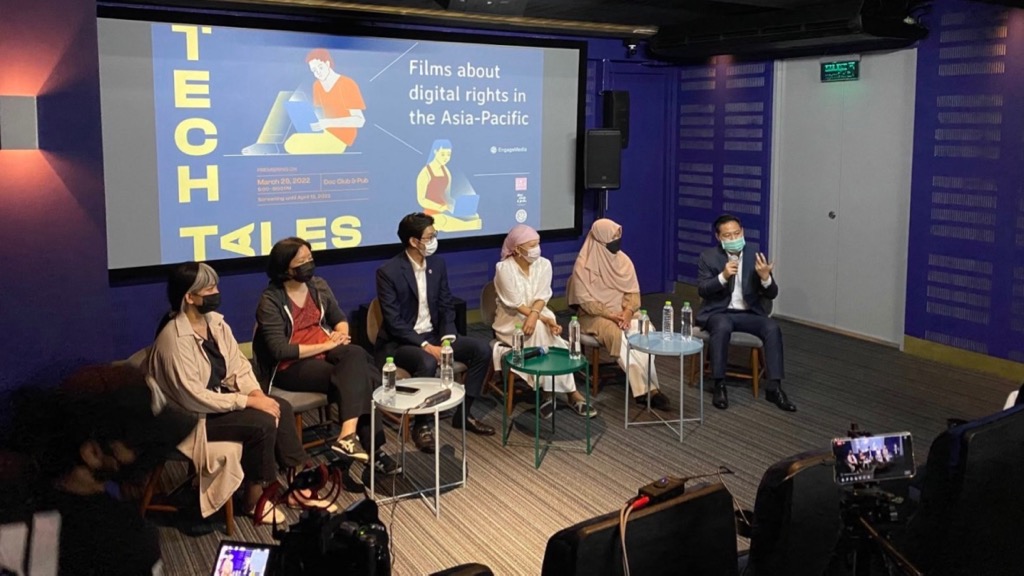 State surveillance, privacy violations, and disinformation were among the key digital rights issues highlighted in the Thailand premiere of Tech Tales: Films about Digital Rights in the Asia-Pacific on March 29.

Over 30 digital rights advocates and representatives of civil society organisations attended the launch of the film collection, presented by EngageMedia in collaboration with Cofact, Doc Club & Pub, and Cross Cultural Foundation (CrCF). The Thailand premiere of Tech Tales was celebrated ahead of International Fact-Checking Day last April 2, an apt time to turn a critical eye on disinformation, censorship, and other key digital rights issues in Thailand and in the Asia-Pacific. A panel discussion following the screening touched on these points, highlighting the similarity of experiences and threats to digital rights facing countries in the region.

“The Tech Tales stories reflect digital rights issues already present in Thailand: from surveillance, freedom of expression, and data privacy, to fake news and disinformation”, he said. “Tech Tales offers an opportunity for us to assess how ready we are to face these challenges”.

Produced by EngageMedia, the eight Tech Tales films highlight human rights stories in the digital age. Since its launch in 2021, various community screenings have been held in the Philippines, Indonesia, Myanmar, and Mongolia. 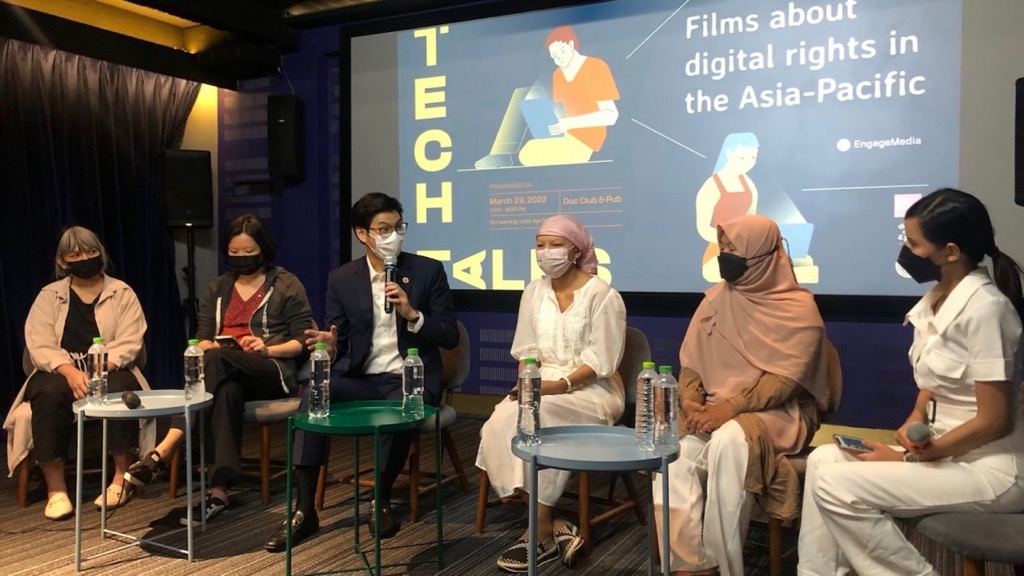 The state of digital rights in Thailand

A forum entitled “Digital Rights: Whose rights? Why does it matter?” followed the screening to discuss the state of digital rights in Thailand and identify challenges for advocacy. Comprising the panel were experts from the digital rights space: Suthida Buakhom, winner of the FACTkathon competition for fighting disinformation; Sarinee Achavanuntakul, member of the Thai Netizen Network; Santiphap Phoemmongkhonsap, deputy director of the Anti-Fake News Center; Supinya Klangnarong, co-founder of Cofact; and Nur Asyikeen Yusoh, CrCF human rights officer. Pattani Calling filmmaker Vijitra Duangdee was also in attendance.

Two main themes emerged from the discussion: the use of existing laws to curb people’s rights, and the lack of accountability for authorities committing rights violations.

On the first point, panellists highlighted the usage of the Computer Crime Act (CCA) to go against those expressing critical political speech online. While the CCA was originally intended to combat online-based crimes such as financial scams and phishing, some of its clauses have been “unproportionately expanded to criminalise the exercise of freedom of expression”, said Achavanuntakul. Despite its amendment in 2017, the CCA has retained many of the problematic provisions that justify the persecution of online users. Online criticism directed at the government has been treated as ‘fake news’ or ‘disinformation’ affecting national security or public morality.

What worsens the negative multiplier effect of disinformation is the “trust deficit in public institutions”, said Buakhom. Achavanuntakul agreed, adding that there seems to be a general sentiment that most Thai people have little trust in the government and its response towards digital security and digital rights violations, with media investigations on data leaks being met with stonewalling or slow response.

There have also been few cases where public officials were held accountable for rights violations or state overreach. One example cited was the collection of biometric data for SIM card registration in Thailand’s Deep South – the subject matter of the Tech Tales film Pattani Calling. The short documentary tells the story of Malay Muslims who protested against state surveillance by refusing to use mobile services, leaving them disconnected from modern communication.

Pattani Calling not only draws attention to the plight of ethnic minorities, but also shows the gravity of rights violations in the Deep South. “The Southern Border Provinces (SBPs) are the state of exception, where rights violations are normalised”, said Yusoh. She added that while the policy was halted, there has been no clarity on how the existing data collected has been used and stored, and the safeguards in place to prevent data leaks.

While acknowledging the negative impact of social media and the spread of disinformation on these platforms, the panellists asserted that ensuring access to the internet and rights to information must continue to be safeguarded.

To help address disinformation, online users should be aware of the different ways that disinformation manifests, and conduct due diligence in verifying content that they see online. Journalists, too, should play more active roles in fact-checking information. However, these individual efforts must be complemented by actions on the institutional level; for instance, Klangnarong said the government could provide resources for these fact-checking initiatives.

Through this, the event aims to inspire collaboration among digital rights defenders in the region to explore creative ways to protect against digital rights violations.

If you would like to host a Tech Tales screening, or include the films in festivals or events, reach out to us through the Tech Tales Partners page.