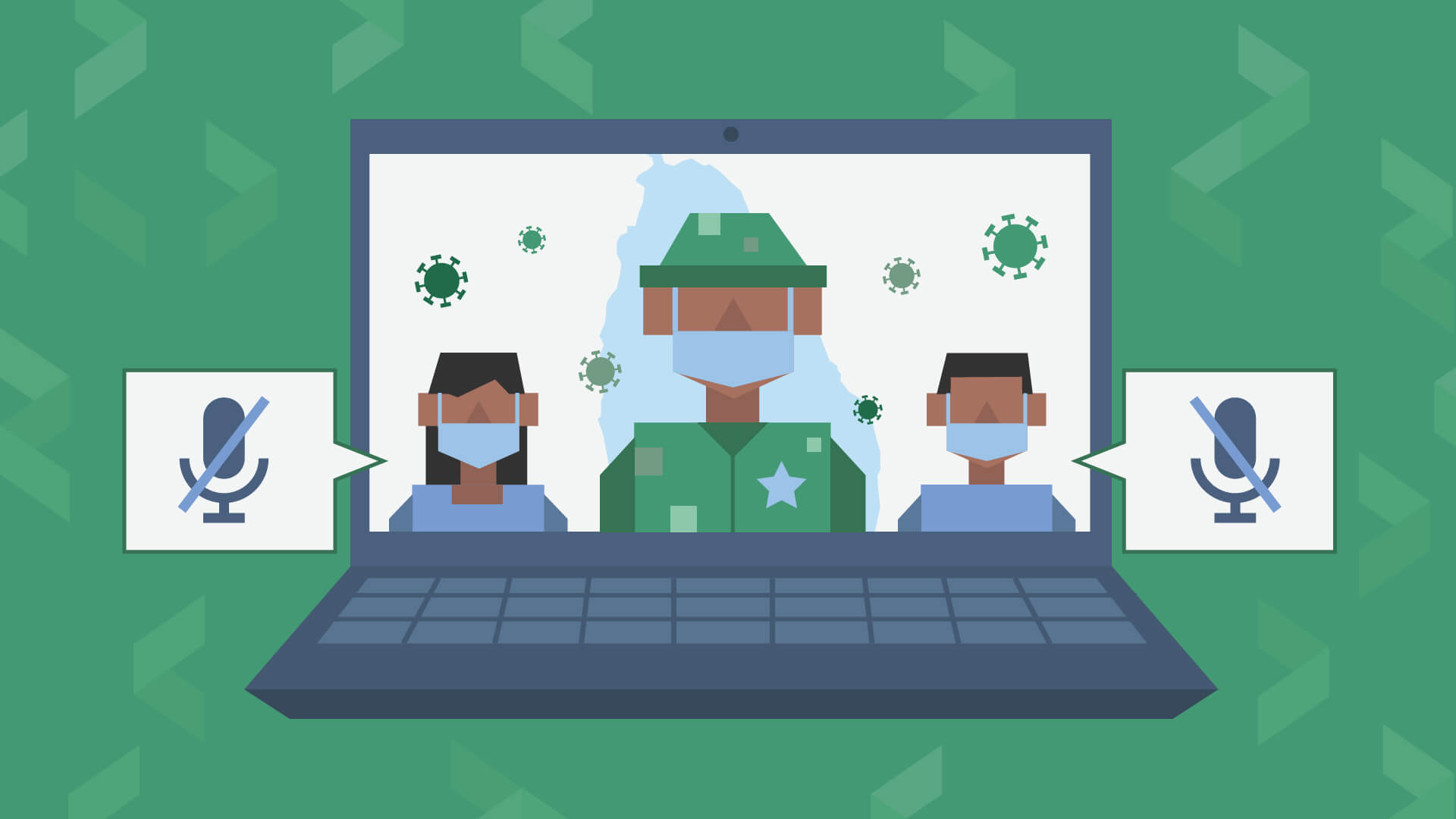 Read this in Bengali

In the midst of the COVID-19 pandemic, the United Nations Office of the High Commissioner for Human Rights released a report on Sri Lanka’s “alarming path towards the recurrence of grave human rights violations”. The country, even before the onset of the pandemic, saw the following trends:

These trends continue today, further fuelled by a 2020 Constitutional amendment expanding the powers of Sri Lankan President Gotabaya Rajapaksa. In practice, the power to enact COVID-19 mandates was concentrated with the President, with limited checks and balances from other democratic institutions.

This concentration of power, coupled with the government’s highly militarised response to the COVID-19 pandemic and state-sponsored disinformation tactics, reinforced the President’s authoritarian agenda and a climate of fear and censorship that continues amid the 2022 national protests due to the current economic crisis.

In this context, this article will explore the use of the digital space as a tool by the government to further an authoritarian agenda. The article also highlights the impact of all this on the rights and freedoms of citizens of Sri Lanka.

State-sponsored disinformation against the Muslim community

The government pandemic response has been criticised for its problematic measures, which include the criminalisation and marginalisation of COVID-19 patients, and alleged police abuses against citizens who question and refuse to comply. Critics who protested against the illegal, ad-hoc, and discriminatory nature of the pandemic response were simultaneously silenced through arrests, surveillance, harassment, and intimidation.

Such measures have disproportionately affected Muslims, a minority community in a country where the majority of the population is Singhalese. Pervasive narratives against the minority Muslim community have historically led to online hate speech and physical violence (documented in 2014, 2018, and 2019). These Islamophobic narratives further intensified during the pandemic, with Sri Lankan officials “stoking communal hate” and government policies discriminatory against Muslims.

Even more problematic, such measures were supported through proxies of the state, including private media entities. One notable instance was in April 2020, when the government’s chief epidemiologist promoted a false narrative that burials of COVID-19 patients – a common religious practice by Muslims – could contaminate groundwater and spread the virus. The government then mandated the cremation for all victims of COVID-19. These measures directly violated Islamic burial practices, and even the best practices stipulated by the World Health Organisation which permitted either burials or cremations for those who died from COVID-19. And yet, private media, such as Derana and HiruTV amplified the statements of individuals who were spreading misinformation around the possible impact of the burial of COVID-infected bodies.

At present, the Telecommunications Regulatory Commission of Sri Lanka (TRCSL) lacks the independence it needs to protect citizens from unwarranted surveillance. In December 2019, retired Defence Secretary Major General Kamal Gunaratne was appointed chairman of the TRCSL; in November 2020, the TRCSL and several other bodies were brought under the Technology Ministry—all directly under the purview of the President.

Internet service providers (ISPs), such as Dialog and SLT Mobitel, do not appear to disclose data about government demands for user information or notify their users if their data has been accessed by the government. Nevertheless, in 2013, Dialog’s CEO stated that telecommunications companies “have to be compliant with requests from the government”. Furthermore, there are no legal provisions that require ISPs to even disclose such information in the first place.

The appointment of military personnel to key positions in the government normalised military involvement and tactics in civilian affairs, framing the pandemic as a security threat rather than as a public health crisis.

General Shavendra Silva, commander of the Sri Lanka Army, was appointed by the President (also a former defence secretary) to head the National Operation Centre for the Prevention of COVID-19 Outbreak. Military personnel was also appointed to coordinate the pandemic response across the country. For instance, military intelligence officers obtained the cell phone numbers of COVID-19 patients from service providers to track down those who had close contact with such patients or those who “evaded” quarantine. This was despite the prohibition of extrajudicial surveillance of personal communications under the Telecommunications Act No. 27 of 1996.

In addition to this use of surveillance, there are also claims of intelligence officers using Pegasus software. Opposition Member of Parliament Harin Fernando made remarks that the government had begun using Pegasus spyware in March 2021. An anonymous Twitter user also claimed that the Defence Ministry had activated the Pegasus spyware suite with the cooperation of Dialog Axiata and Mobitel with specific targets of “lawyers, activists, journalists, judges, some retired cops, and even senior Cabinet members seen as disloyal to the President”. Dialog has since said the allegations were false. Nevertheless, representatives of the government have stated that the Intelligence Unit has not made a request for the software to be purchased, but that the government would consider it if such a request is made.

On top of this surveillance, individuals who have criticised either the President or the government’s COVID-19 response have been arrested throughout 2020 and 2021.

As part of the repressive crackdown on online dissent, there was an attempt to bring in laws to counter disinformation. However, the weaponisation of existing laws, such as the International Covenant on Civil and Political Rights Act No. 56 of 2007 and the Computer Crimes Act No.24 of 2007, against social media users peacefully exercising their right to freedom of expression raises concerns over the introduction of any legal framework that could provide wide discretionary powers to the executive to suppress free speech.

In 2020, the Police Media Division issued a letter to the Criminal Investigations Department and the officers in charge of police stations across the country to arrest not only persons who made or shared “false or malicious” content on social media, but even those who criticised government officials involved in preventing the spread of the pandemic. The government later clarified that the police internal directive only applied to cases in which the “fake or malicious” information contravened laws surrounding the duties of public officers and not mere criticism of the government.

A notable illegal and arbitrary arrest of an individual under both the ICCPR Act and the Computer Crimes Act was that of Ramzy Razeek, a retired government official who often uses social media to comment on social and political affairs. In an April 2020 post, he called for an “ideological jihad (struggle)”, using the pen and keyboard as weapons, against the mandatory cremation policy. Ramzy Razeek was detained without charges or proper access to a lawyer and medical care for five months until being released on bail in September 2020. He continues to face the threat of arrest and formal charges against him to this date.

In June 2021, police headquarters issued a statement emphasising that persons who published false news on social media might be arrested without warrants. Five months later, Additional Secretary Dhammika Muthugala, on behalf of the Secretary of Home Affairs State Ministry, issued a letter warning public servants against criticising the government and its policies on social media. The letter stated that the Ministry would take disciplinary action against those who bring the Public Service into disrepute by posting social media comments critical of the government and its policies.

In January 2022, the Senior Superintendent of Police was quoted by a local newspaper as stating that the sharing or posting of content that is detrimental to the image of the President on social media platforms has been prohibited. No such law prohibits this. However, the policy was enforced in the arrest of a woman who merely shared a post about the President being hooted at while travelling.

Government initiatives for contact tracing and quarantine compliance as part of the pandemic response have also fed into broader attempts by the government to establish digital databases with details of citizens. Concerns over these attempts have since been raised.

The government’s pandemic strategy laid the foundation for the President’s increasingly authoritarian response to the exercise of citizens’ constitutional rights both in the physical realm and on the internet. But the unprecedented people’s revolution in the midst of an economic crisis post-pandemic lockdowns appears to reject state disinformation and narratives, defy surveillance, and resist intimidation and threats of arrests in the pursuit of finally ending President Rajapaksa’s authoritarian reign. While the government has used short-lived curfews, a state of emergency, and an 15-hour social media ban to stop the protests and suppress dissent, the protests are growing only stronger by the day.

Harindrini Corea is an Attorney at Law who holds a Bachelor of Laws (Hons) from the University of London and also a Diploma in Forensic Medicine and Science from the University of Colombo. Currently a Legal Officer at Hashtag Generation, her research interests are in fundamental rights, the criminal justice system, digital rights and social justice.