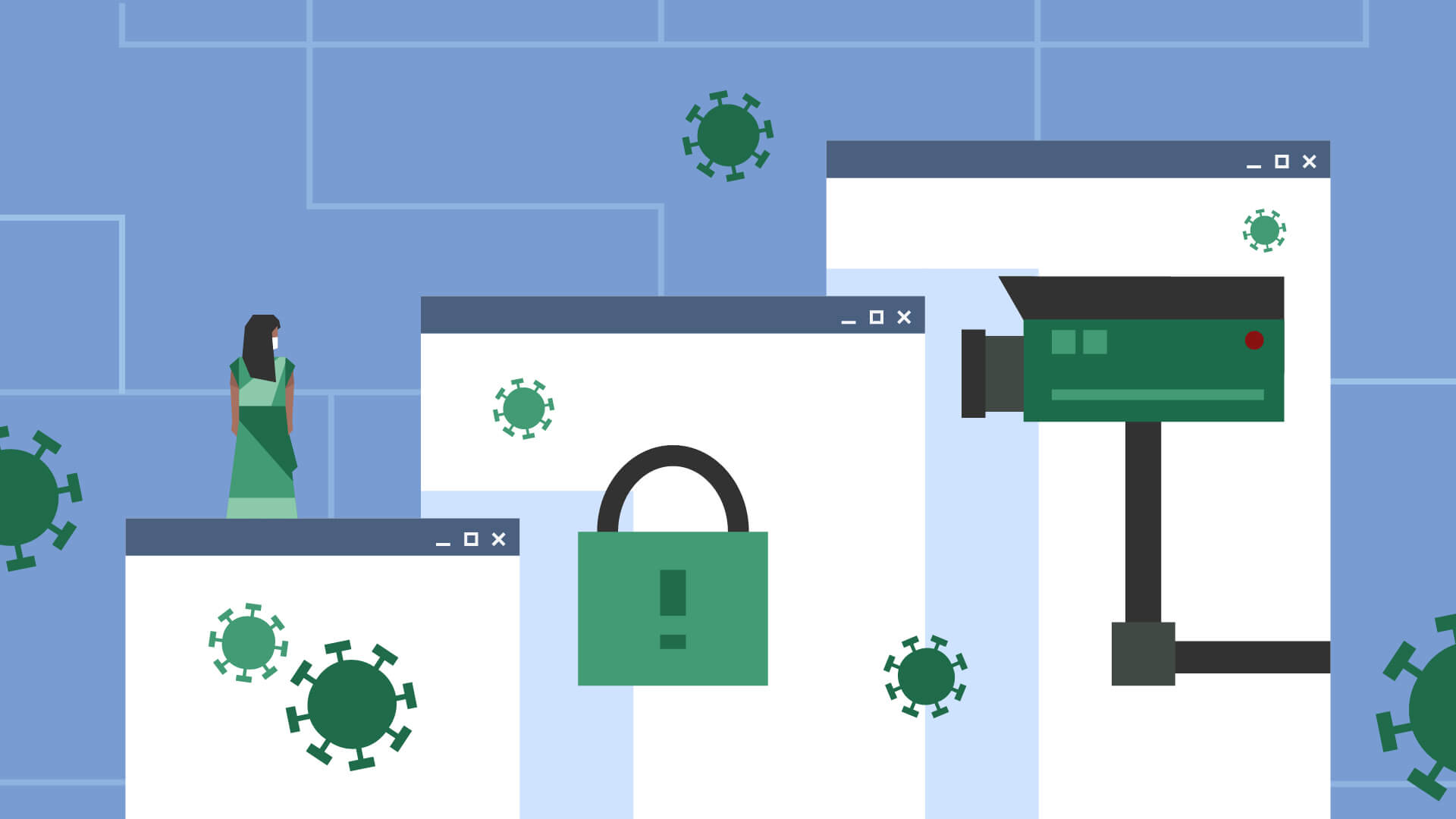 The COVID-19 pandemic sped up the adoption of digital technologies by five years. However, the pivot towards digitisation is excluding those with little to no access to digital services. As part of its pandemic response, India implemented one of the strictest lockdowns in the world, forcing citizens to access most basic services digitally – banking, telemedicine, and social services, among others. While a small percentage of the population was ready to jump into the digital world, the majority had no choice but to scramble to access these digital resources in the first place, leaving them vulnerable to exploitation.

The digital divide affects the most vulnerable in rural areas. According to the 75th round of the National Sample Survey, only 13 percent of people over five years of age in rural areas have the ability to use the internet, compared to 37 percent in urban areas. The COVID-19 lockdowns highlighted this digital divide further: between March 2020 to February 2021, Indian schools were fully closed for 62 percent of instruction days and partially for 38 percent. Only 15 percent of children from rural areas had access to education. Aside from education, this disparity in access to digital services persists in other areas of daily life, such as telemedicine, banking, and e-governance.

Digital inequity is based not only on quantitative metrics (such as the number of smartphone users in India) but also on qualitative indications of what one aims to do with such devices and the clear discrepancy between these intended uses and one’s actual access to technology.

Perspectives from the ground

In March 2020, when the Indian government announced an unplanned nationwide lockdown with a four-hour notice, 90 percent of the country’s workforce – informal workers – faced a huge crisis. Around 80 percent of the workers were stranded in various parts of the country with less than Rs.100 (less than 2 USD). We spoke to fellows of the Stranded Workers Action Network (SWAN), a group advocating for migrant workers’ issues, to understand how they felt about the push for digital adoption in accessing basic social services.

Seema, 27, is a trained nursing support staff from Simdega, Jharkhand, and also a SWAN fellow. She believes digital adoption can be beneficial, citing how she has been able to assist a few people from her community register online for their e-shram cards (a social security scheme for unorganised sector workers). However, she immediately added that knowing how to use these online registration portals is limited to a select few. In theory, one can register for various government schemes and certificates (such as a Caste Certificate, or a proof of identity) by themselves. In reality, however, the use of online systems has led to the creation of a whole set of middlemen, including private vendors with a computer and internet connection, offering to undertake the registration process for a certain fee. Seema talks of how this setup monopolises information into the hands of a few. To register for a certificate, for instance, one needs to supply an identification document and proof of address, among other requirements. Once this information is uploaded by the workers onto the portal through these private vendors, the workers face an uncertain wait for a document that may or may not reach them. They have no mechanism to track the progress of their applications, forcing them to rely on private vendors.

One wonders: Was it not the same case even before digitisation? While not ideal, Seema says non-digitised processes offered them options. “At least before, we could plead with the district officer, visit him every day and follow up with him to get them to issue the certificate even if it means to plead with them. We were able to use our social connections. Now, we are helpless”, she said.

Seema added: “We don’t know what is going on online, nor do we know how to follow up on an application, and are left at the mercy of the operators to tell us what’s happening”.

Gulzar, another worker from Jharkhand who was stranded in Goa during the lockdown, echoes the same concerns. While implementation of technology can be helpful to many people, he feels that for villagers, it isn’t of much use so far. Gulzar says they get hoodwinked into sharing personal information, such as banking details, resulting in multiple people losing money from their accounts. They are not equipped to do mobile banking by themselves, so if they want to check if their wages are deposited in their accounts, they often have to rely on either officials or middlemen to check their account balance or the status of their wages.

The main problem that emerges from the narratives of Seema and Gulzar is not that of corruption or delays – for it can certainly be argued that this can happen in any system. The glaring issue is that the common person has been completely left out in a digital society, excluding them from exercising their basic rights and entitlements. To solve systemic inequities, technocratic solutions like digital adoption have been touted as the end solution for all societal and systemic problems – including the problems posed by COVID-19 mobility restrictions. However, as Seema explains, this shift to digital systems has been forced upon them and they never had a choice to begin with.

They are thus left with a system they do not know how to use, allowing them to be exploited, and a system they do not understand leaves them unable to hold anyone accountable. Gulzar’s concern about the middlemen points directly to the ambiguity in accountability that online systems bring and the lack of any support and training in supporting the marginalised in adapting to digital technology. Thus, digital adoption is furthering existing inequities and creating new power structures that put the vulnerable in a disadvantageous position.

The stone’s throw from digitisation to digital surveillance

Is there then a link between this rapid digitisation of services, its inaccessibility, and it becoming digital surveillance? The collection, use, and control of personal information become evident in the narratives we present here. We believe it is, and this argument stems from what Seema told us at the end of our conversation. We asked her: do people have any concerns about where their data goes? Does the digitisation of services translate into concern about digital rights and privacy? She says they are worried about the consequences of uploading data online, for fear that it can be used for purposes other than that for which it is solicited. Interestingly, the misuse Seema refers to is governmental misuse and not concerns of third party access to her data. It is a concern that the data they surrender online will be used to prosecute them if ever needed.

When asked the same question, Gulzar tells us: “It’s not just a concern, I have seen people [end] up in trouble because of sharing these details online!” A friend of his had to share banking details for an online registration, and soon bizarrely had a First Information Report (document prepared by the police related to the commission of an offence) against his name with charges of hacking linked back to his account. “My friend is illiterate. How can he even be capable of hacking, something that requires using a computer?” says Gulzar. He cites another example on the risks of sharing personal information with middlemen, such as bank account details. At times, these middlemen would simply say that the bank accounts are empty despite the workers having been paid, blaming some online issues while pocketing the money. “We simply don’t know what to do when faced with trouble. At least before I could write an application or something, but now I don’t even know what the problem is”, he said.

The compulsion of having to rely on a digital system, coupled with it being a system that leaves them vulnerable to exploitation, shows how their lives are now shaped (unwillingly) through technology. The government has also been actively enforcing this inclusion into digital systems, going beyond social security schemes and encompassing other aspects. In June 2021, 22,000 Accredited Social Health Activist (ASHA) workers (the primary health workers of India) in Haryana protested against a mobile app that was made compulsory by the Nation Health Mission of India. Health workers were mandated to download a Mobile Device Management (MDM) application to report and track their work, violating their digital privacy. The application, “MDM 360 shield”, was forcefully installed on the workers’ personal phones by local health department officials. In cases where they were provided with a new phone, the workers were not informed that the application had been pre-installed on the devices.

This development poses serious concerns, as India is yet to have comprehensive data protection policies despite having a large biometric database. There is no actual legal framework on data quality and proportionality, data transparency, or mandating a Data Protection Authority to properly address and cover data protection issues in accordance with the principles of the European Union’s Data Protection Directive, OECD Guidelines on the Protection of Privacy, or International Safe Harbor Privacy Principles. The latest draft of India’s Personal Data Protection bill in 2019, tabled in the parliament in December 2021, exempts the government from its purview. The bill prioritises economic interests over the need to protect personal information privacy and has received criticism from digital rights activists.

The push for digitisation during the pandemic – whether for health management or to keep daily activities going amid lockdowns – has deepened the digital divide. Escalated digital adoption without adequate policy protections can exclude the already marginalised even more, yet no one can be held accountable because India lacks any comprehensive framework to do so. While access to social benefits and privacy are recognised as fundamental rights, any program or policy that isn’t inclusive is bound to encourage a development paradigm that leaves the vulnerable behind. The narratives of Seema and Gulzar and the experience of the ASHA workers all point to this effect.

Vaishnavi is currently the policy expert in Greater Chennai Corporation’s Gender and Policy lab. She is a social sector researcher with interests in local democracy, political participation, and gender. She can be reached at vaishnavi.cnathan@gmail.com.

Anish is currently an MPhil student in the Hong Kong University of Science and Technology. He does environmental philosophy with a focus on Aesthetics, Buddhism, and Social Justice. He can be reached at amishraac@connect.ust.hk.

Anish and Vaishnavi are part of the Stranded Workers Action Network (SWAN), a voluntary network working with informal workers through relief and fellowship. Seema and Gulzar are SWAN fellows and we thank them for their inputs.