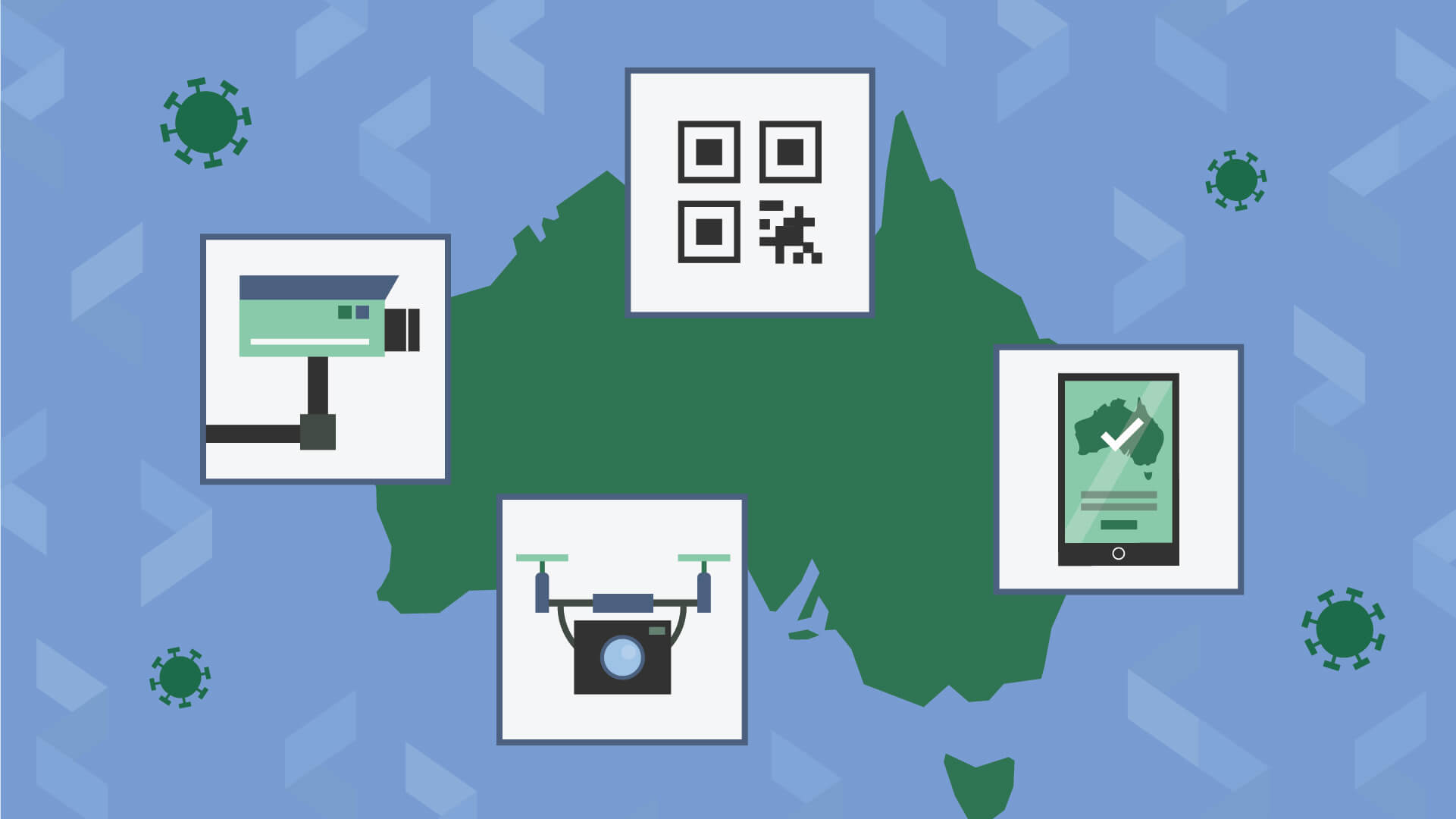 In early 2020, COVID-19 took hold in Australia. We watched as the lockdowns in Wuhan, China became more commonplace, and the virus made its way across the world. In Australia, the government policy evolved to become ‘zero COVID’, enforced through the donning of masks, social distancing, and oftentimes, lockdowns. Suddenly, almost every aspect of our lives moved online.

In times of crisis, governments often rush through additional powers, many of which put human rights at risk, and are rarely wound back once we return to relative calm. The ubiquitous technologies of the digital age, combined with a pandemic requiring us to isolate ourselves from each other, tilled the soil for a future where digital surveillance and control could bloom. In anticipation of this, human rights advocates urged governments to uphold human rights in any technological response to COVID-19. As lawyer and digital rights activist Lizzie O’Shea puts it: “What will get us through this virus is not coercion and fear, but advocating for and carrying out the politics of care and solidarity”.

Digital technologies can play an important role in supporting a robust public health response. The question is not if we should use technology, but how. The technological choices made by Australia’s state and federal governments during this tumultuous time speak volumes about their priorities and ideologies. By reflecting on the past two years, we can observe a trend: rather than employing technologies to improve and enhance care and support of the population they were responsible for, governments in Australia prioritised politically buzzworthy projects based on an ideology of surveillance and control.

In this piece, we examine four technology-based government responses to the COVID-19 pandemic: police use of drones and other mobile surveillance cameras, the COVIDSafe App, the QR code check-in system, and facial recognition-enabled home quarantine apps. These, coupled with avoiding transparency and a reluctance to engage with technical experts and civil society, ultimately resulted in technological “solutions” that ranged from outright ineffective to actively punitive.

Over a period of more than two years, these rules and policies combined to create an environment where those in Australia were left without work, with inconsistent support, and the threat of punishment for transgressions by law enforcement with beefed-up powers. Many struggled with frequently changing rules that conveyed confusing or conflicting instructions. Vital health advice was often not sufficiently translated into languages other than English. On top of this:

It is in this landscape that many individuals and communities were left scrambling, forced to turn to each other for mutual aid, and in many cases, risk breaking lockdown rules in order to survive.

In late 2020, Australian media outlets reported that Victoria and NSW Police were using drones to monitor and enforce COVID-19 rules in public spaces including parks and beaches. This created significant unease among the public about surveillance capacities, to which Victoria Police attempted to publicly reassure people. Alongside this, mobile camera surveillance units were deployed throughout parks and other public spaces, and CCTV was repurposed to police COVID-19 restrictions, to the public’s dismay and anger. Many criticised the government’s aggressive and punitive approach to monitoring and fining individuals breaking lockdown rules, and expressed concern that governments and law enforcement were overstepping their authority without adequate safeguards, transparency, or accountability requirements.

In April 2020, the federal government released its solution to the challenge of contact tracing: the COVIDSafe App. It was accompanied with a swathe of political rhetoric to convince people to download it. We heard moralising wartime metaphors, claims that the app would offer protection from infection “like sunscreen”, and patriotic calls to join “Team Australia”. The Australian public was told that 40 percent uptake was needed—a number which, it would later be revealed, was based on nothing. Over 7 million people downloaded the app, but widespread distrust of the government’s technical ability, mishandling of privacy and security concerns, and technical flaws in the app’s design all contributed to downloads never reaching the made-up target.

The app was designed to use Bluetooth to detect and record unique identifiers of nearby phones, provided they were also using the app. If a person tested COVID-19 positive, the list of all those they came into contact with was sent to the government, which then notified those who may be at risk. Crucially, it was found that the app did not work unless it remained open. This was a fundamental flaw, as it was impractical to have it open at all times.

Another key concern was the app’s centralised model, which required the government to act as the middleman and to handle all the personal information collected. While contact tracing was accepted as useful and necessary to manage the spread of COVID-19, the potential for mass surveillance or other misuse of such revealing social interaction data was not underestimated. Privacy and security advocates strongly recommended the government take a decentralised approach, in which people’s phones would directly alert others should they be exposed to the virus, without needing the government to act as a conduit. This was ignored.

In spite of this, digital rights advocates in Australia were successful in pushing the government to incorporate specific privacy protections into legislation governing the app, including limitations preventing the use of the data for purposes other than public health.

Almost two years after the launch, a report evaluating the app’s effectiveness showed that it did not add much value to the existing, conventional contact tracing system, and in some instances actually increased the workload of contact tracers. The app cost 7.7 million AUD to develop, and an additional 60,000 to 75,000 AUD per month to maintain. As of December 2021, the Australian government refuses to release data on how many people continue to use the app.

Notably, the federal government is now reportedly considering alternative uses of the app, presumably to save face after having spent so much time and money on something that turned out to be practically useless. It is not difficult to imagine how an app designed to track the interactions of individuals could be misused in a context other than contact tracing in a pandemic.

In November 2020, a new process to “check-in” to shops and venues using smartphones and QR codes arose. While this system would prove to be more useful than the COVIDSafe App for notifying people of possible exposure to the virus, this process was not without its challenges.

The rollout of the check-in system was chaotic. Each state established its own requirements, which varied drastically. In Victoria, for instance, the government initially made it compulsory for businesses to collect the personal details of individuals visiting their establishment, but this was not accompanied with guidance or support on how to do so safely. This resulted in many small businesses with little to no technical experience in security and privacy rushing to outsource their check-in requirements to third-party registration platforms. The personal information of millions of Australians was put at risk of being collected, used, and sold for purposes completely separate to public health, by a range of third party registration platforms—many of which are owned by companies whose primary business is dealing in data.

Eventually, state governments rolled out their own mechanisms for businesses to register for an official QR code to function with a government-run smartphone application. While this improved the initial problem, it did nothing to resolve the innumerable amount of people who had their details shared in the interim, and now receive marketing and spam text messages.

It also does not eliminate concerns regarding government bodies capturing and using data collected by way of the check-in system. On at least six occasions, police have used check-in data for the purpose of law enforcement, a move condemned by the Australian Privacy Commissioner.

In October 2021, the state of South Australia announced a trial of a home quarantine smartphone app. The app was designed to enforce compliance with home quarantine rules through geolocation and facial recognition software to confirm an individuals’ identity and location at spontaneous intervals. Following the trial, other states around Australia also announced they would be trialling the app.

Technology experts, human rights lawyers, and civil society expressed concern regarding the use of such invasive technologies without strong privacy protections in place. Digital Rights Watch and Human Rights Law Centre wrote a joint letter to Australian health ministers, urging them to extend the same standard of legislative protections that were put in place for the COVIDSafe App to any other technological response to COVID-19.

Despite clear calls for assistance from affected communities for increased support, welfare payments, and funding for health services, governments prioritised responses that emphasised a punitive, surveillance-based approach. In doing so, Australian governments mistreated the social licence—the informal authority granted to the government by the people based on trust and confidence to see us through a major health crisis—for their own political agenda.

Looking back after two years, it is not clear that these approaches, nor the concessions given on civil liberties, were worth it or even effective. It is, of course, easy to say what should have been done with the gift of hindsight. Nonetheless, it is clear that Australian governments approached the use of digital technologies over the course of the COVID-19 pandemic from an ideological perspective, heavily leaning on control and surveillance and sidelining a politics of care and support.

Throughout the pandemic, technology experts, human rights organisations, and civil society groups in Australia have been loudly calling for governments to listen to their suggestions and consider their warnings. By ignoring them, federal and state governments missed an opportunity to build a robust and engaged multi-stakeholder response to COVID-19, and made many avoidable mistakes.

The COVID-19 pandemic is unlikely to be the only crisis that we face in our lifetimes, and it is important that we learn from this experience so that we can use digital technology to respond in a more effective and rights-respecting way in the future. Just as advocates warned at the beginning of 2020, embedding human rights into any technological response to a crisis is essential not only to its success, but also to ensure that we have a society we are glad to be part of once we return to times of relative calm. Australia would do well to heed this lesson.

Samantha Floreani works at the intersection of human rights, technology, and feminism. She is currently the Program Lead at Digital Rights Watch where she advocates for human rights in the digital age. She was previously a Privacy and Technology Specialist with Salinger Privacy, a Board Member of the Australian Privacy Foundation, and Program Director for Code Like a Girl.

4 thoughts on “Policing the pandemic: Australia’s technology response to COVID-19”