How to build an engaging impact campaign: Practical lessons from ‘Sunday Beauty Queen’

“Doing impact is a combination of timing, access, and content”, Villarama said. “[We] played around these three things by mixing impact and distribution”.

She explained that for a good film to catch attention and increase its reach, it not only has to capture the appreciation and understanding of local audiences, but also needs a universal tone so funders and broadcasters can latch on to it. As a Southeast Asian filmmaker, Villarama emphasised the need to exert extra effort to translate local stories for a wider audience.

Villarama shared four practical lessons from the impact campaign of Sunday Beauty Queen, ranging from tips on sparking conversations to staying true to the message of the film. 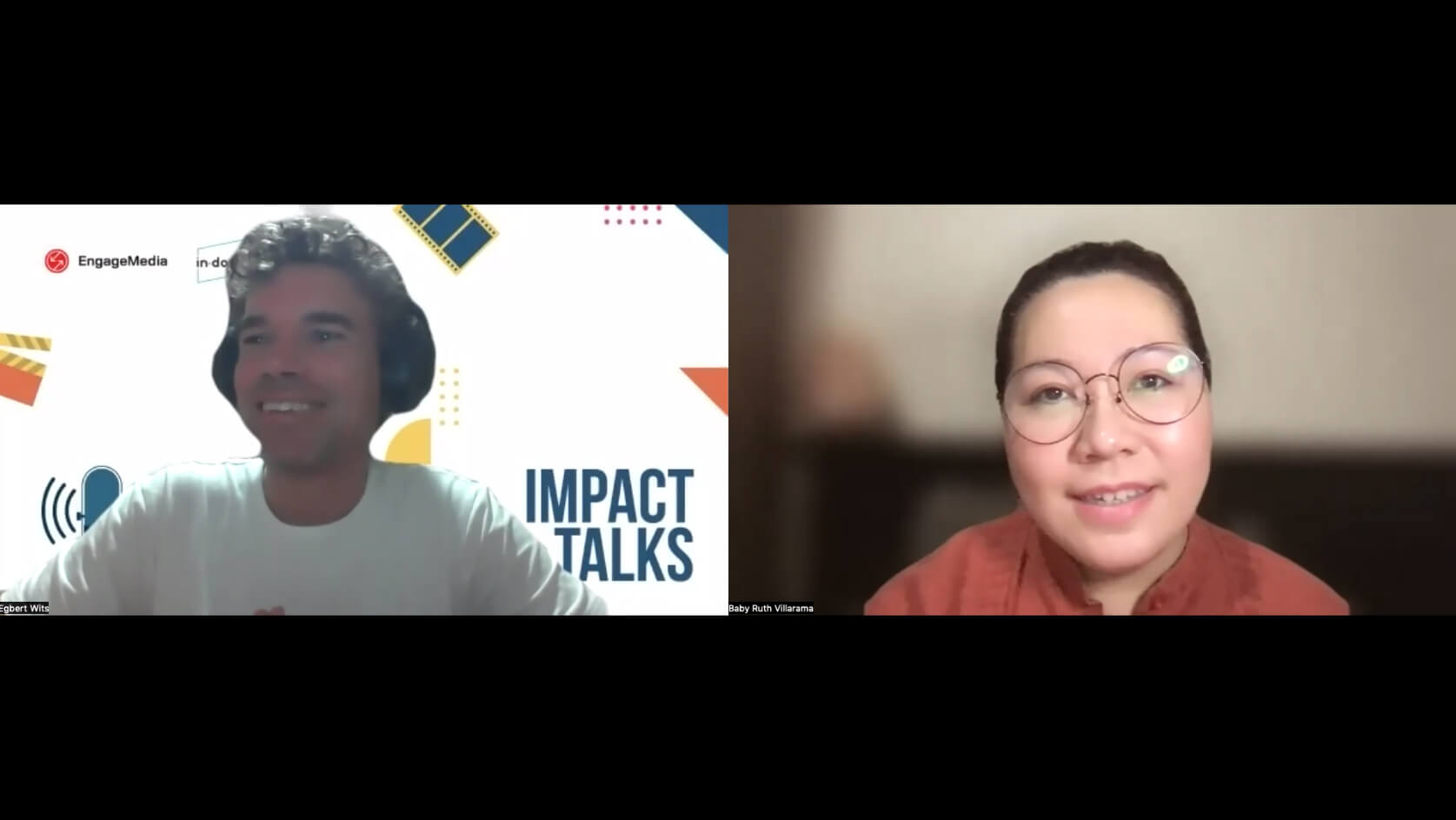 Sunday Beauty Queen used three platforms to plant ‘seed’ audiences who played a crucial role in building conversations around the film. This was done through online platforms; via events and physical screenings; and via media networks and press releases.

Since independent documentary filmmakers usually have limited budgets for the promotion and distribution of their films, Villarama prioritised boosting her film’s online presence because that was what they could afford back in 2016.

To build up momentum, the production team conducted events and screenings in schools and other venues to activate more seed audiences in sectors that would create the additional social movement and influence that the film needed. 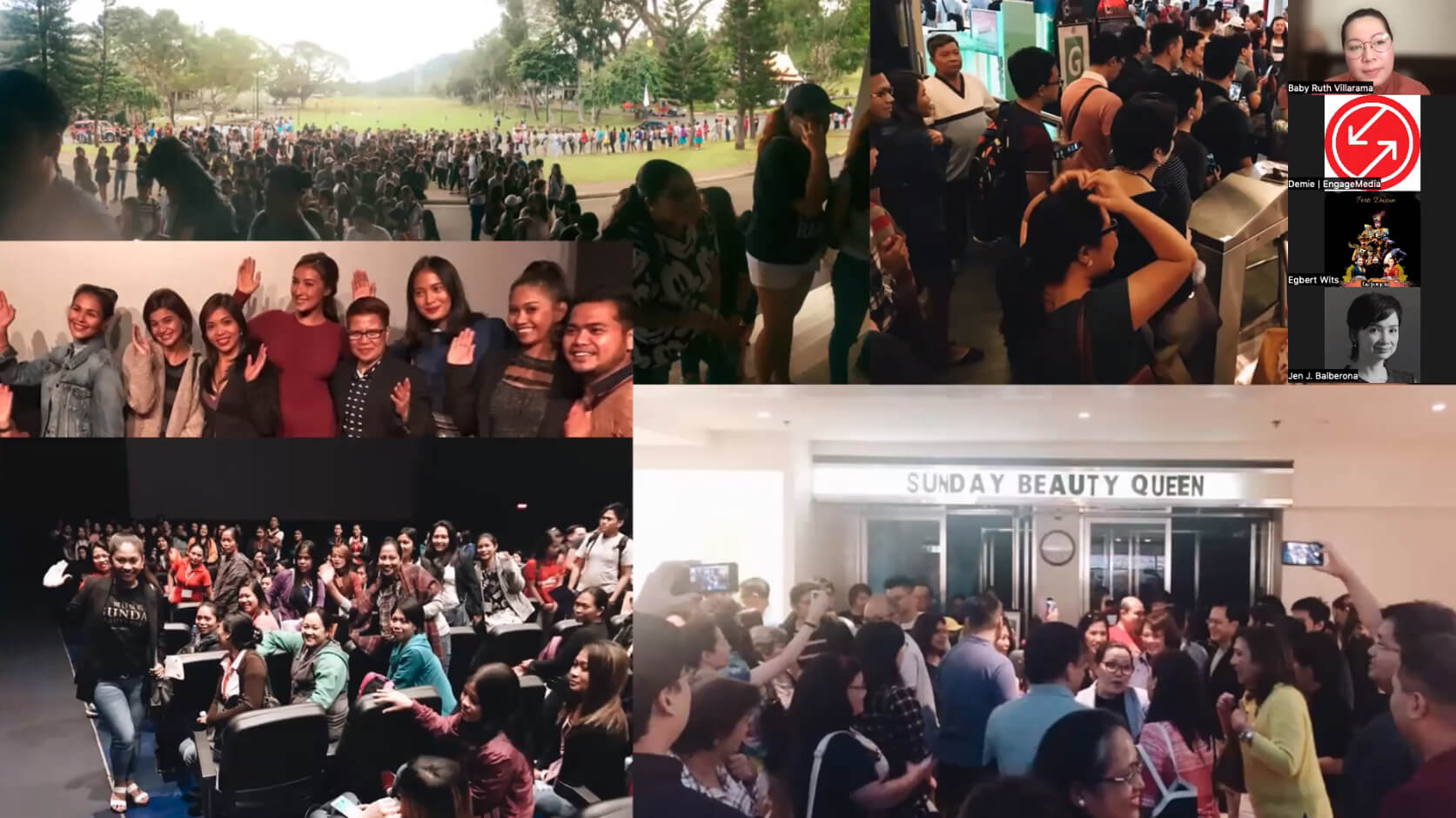 The production team held various screenings and tapped media connections to generate conversation around the film. Screenshot from the Impact Talks session via Zoom.

“We continued to invite members of the press who were interested [in covering ]the seed screenings that we were doing. So it’s like a little circle that we keep on energising every time we organise minor screenings”, Villarama explained.

She added: “It doesn’t have to be big. For example, you can just organise a sample film screening in one school. [Then] you invite local members of the media, a sectoral member of a [non-government organisation], or a school head, and create conversations after the screening, and that would spark something”.

To create these conversations in the ‘seed screenings’, Villarama also made sure that Sunday Beauty Queen “offers a neutral platform for people to converse, to have those discussions that can help not just the film, but what the film is saying”. 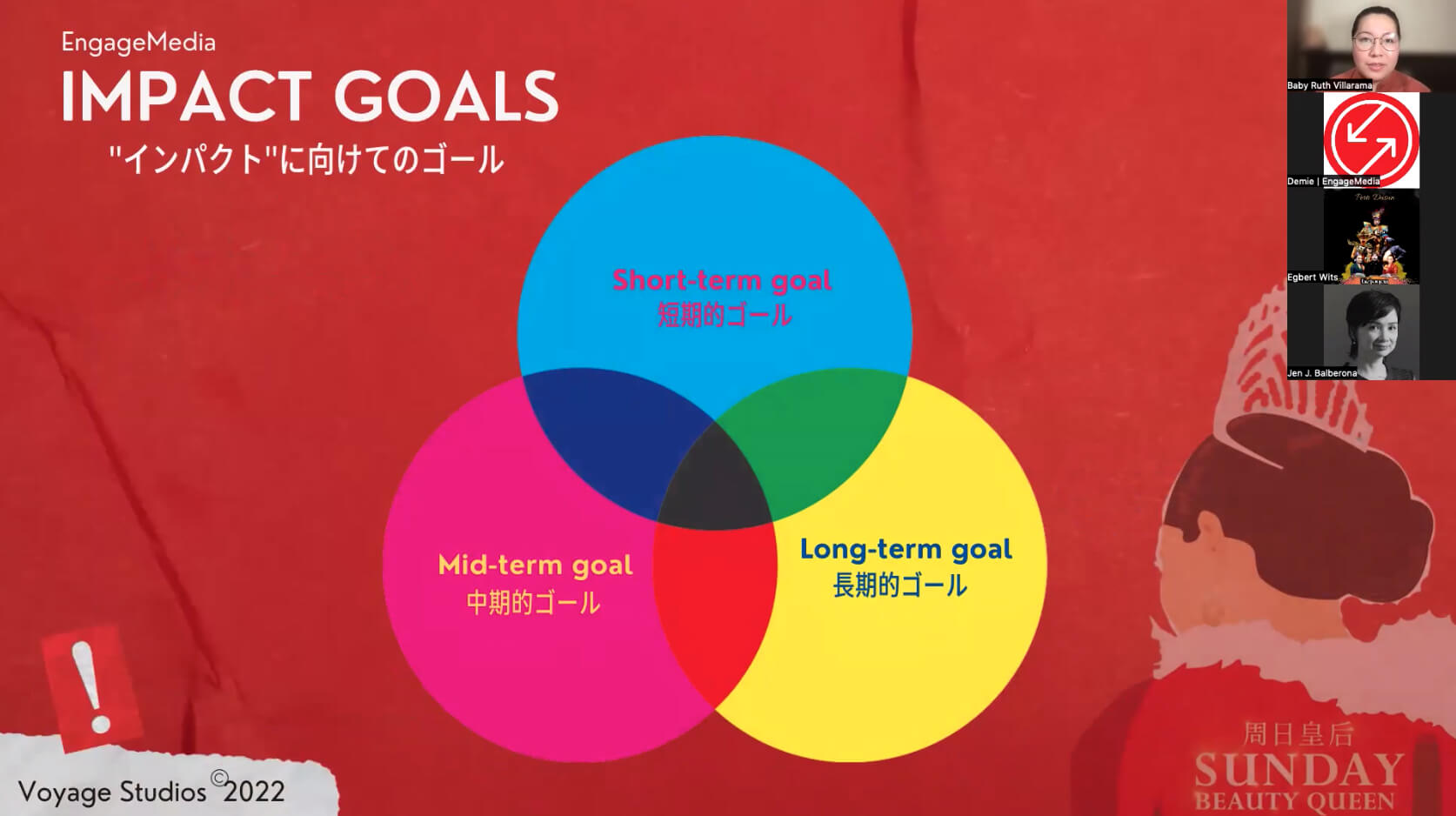 Lesson 2: Be realistic with your impact goals

Anticipating how much impact a film can create can be challenging, but it helps to start small and set realistic goals that can be divided into short-, mid-, and long-term goals. “My long-term goals are a combination of little short-term goals, [like] organising small screenings, inviting people, [making] sure that everybody is updated about the screenings, [keeping] people interested, and creating a mini-online community”, Villarama said.

She added: “Start small. There’s nothing wrong in taking baby steps in order to reach that long-term goal that you want”.

Lesson 3: Identify the main message of your film

Villarama said it was important to identify the film’s unique point and imagine the conversations that can result from it. She added that it is better to have just one focused message so people will remember the film.

In the case of Sunday Beauty Queen, the team described the film as a “real-life Cinderella story following a group of Filipino househelpers who dreamed to be a beauty queen in Hong Kong, in a pageant like no other”.

“[If] Cinderella has until midnight to go back to her home, these Sunday beauty queens must go back to their employers before 9PM, sometimes 7PM, or else they run the risk of losing their jobs. And if they lose their jobs, they only have 14 days to remain in Hong Kong. [We worked around] this message [to create] the impact campaign,” Villarama said.

Meanwhile, the message of the impact campaign was that “anyone can wear a crown”.

“That’s the simple message that we want to spread. You deserve to wear a crown regardless of what you’re going through, regardless of so many failures and challenges”, Villarama said. 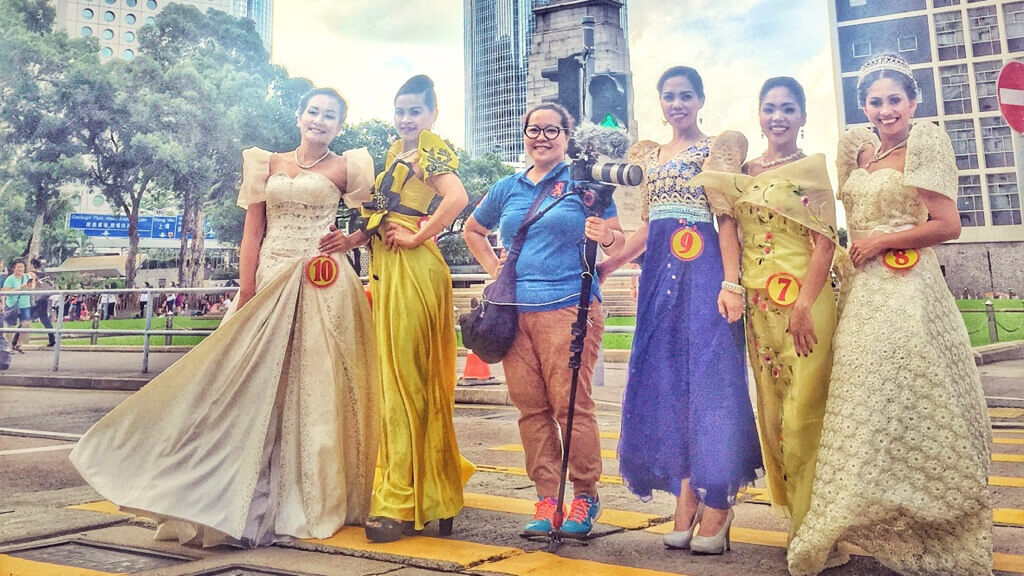 Baby Ruth Villarama together with some of the film’s protagonists during the annual beauty pageant. Photo courtesy of Voyage Studios.

Lesson 4: Align your intentions with your protagonists

Filmmakers must share the same truths and impact goals as the subjects involved in their films, and this requires vulnerability and compromise. “Your intention should be in alignment [with] the intention of the characters, and you [should] have a similar path that you want to undertake together”, Villarama said.

“There’s also a level of trust and respect that both filmmaker and subject need to [cultivate]. With Sunday Beauty Queen, we are dealing with time and distance, and also cultural differences. We needed to respect that”, she added.

For Villarama, identifying the main objective of the film will shape the direction of the impact campaign. Sunday Beauty Queen aimed to inspire action and advocacy for policy change, and this has been visible in the impact the film has achieved: it has already led to an outpouring of support for the Bethune House Shelter in Hong Kong, which provides sanctuary to displaced workers of all nationalities. As the film eventually aims to influence long-term policy change, the impact campaign for the film continues.

There is no one-size-fits-all model in designing impact campaigns, according to Villarama. “Each film will always have its individual demands and requirements to be able to reach the community and the impact desired”.

But when designed with care and thorough understanding of what the film and its protagonists aim to achieve, creating meaningful impact is possible. “Films [alone] cannot change the world or society, but we can inspire champions that can help us change our society for the better”, she said.

Impact Talks, organised by EngageMedia and In-Docs, is a series of public meetings among filmmakers, activists, campaigners, film curators, impact producers and interested audiences to share and discuss experiences and ideas around creating impact through film in the Asia-Pacific.