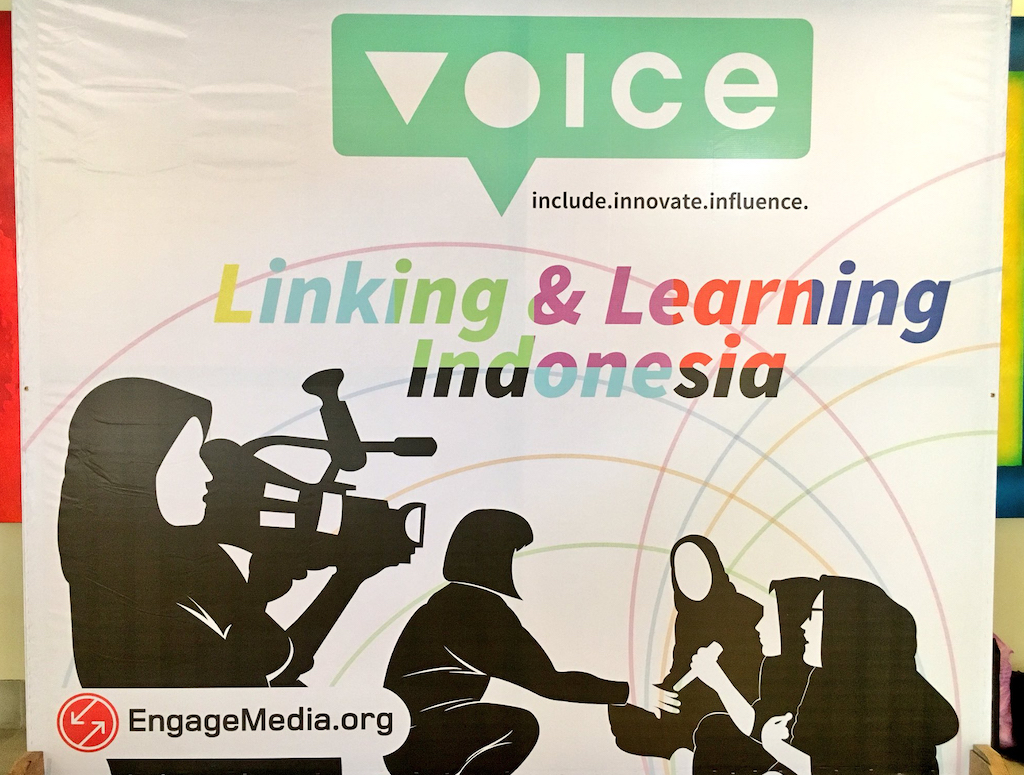 Voice Indonesia had its first annual Linking & Learning (L&L) event during 15-19 April 2018 in Bali. There were 38 participants, including representatives from 15 Indonesian partners, EngageMedia (the L&L facilitator), and the country team.

This video summarises the event:

This video describes the building blocks of the Linking and Learning process and how it helps support the grantees in their advocacy work, learning from each other, and scale-up innovative solutions.

EngageMedia interviewed a number of participants of the Linking & Learning (L&L) event from different Indonesian organizations which are listed below.

This is an interview with Mr. Anwar Sholihin, the Executive Director of Lembaga Pengkajian Kemasyarakatan dan Pembangunan (Institution of Social and Development Studies) East Java. LPKP is helping towards establishing an independent institution for migrant workers in Malang city, East Java, Indonesia.

An interview with Sugeng Yulianto, the project manager of Institute for Research and Empowerment (IRE), about the Voice Linking and Learning project, its relation to the grantees, and the hope for future. Institute for Research and Empowerment (IRE) Yogyakarta is an independent, non-partisan and non-profit organisation, which grew from the academic community in Yogyakarta. IRE focuses its activities on the promotion of democratisation through strengthening the initiative and critical stance of the communities, state, and private sector.

An interview with Edwin and Lidya from the PPH (Center for HIV Studies) in Atma Jaya Catholic University, Jakarta about their mission and current projects. The HIV/AIDS Research Center at Atma Jaya Catholic University (Pusat Penelitian HIV/AIDS or PPH) is one of five research centers managed under the Research and Community Development Institute (Lembaga Penelitian dan Pengembangan Masyarakat or LPPM). PPH has been engaged in the study of HIV and AIDS since the mid-1990s.

An interview with Akbar Restu Fauzi, Youth Movement Coordinator of Pamflet Generasi, a youth organisation based in Jakarta which is part of the Voice grantees network. Pamflet is a youth-led organisation established to encourage and strengthen youth to participate in the process of the social movement, by providing information and knowledge about activism and human rights.

Interview with Thesa or Anesthesia Novianda, Communication Officer for the Centre for Innovation Policy and Governance (CIPG). Evolving from a study group of Indonesian scholars abroad since 2007, Centre for Innovation Policy and Governance (CIPG) was officially established in Jakarta, Indonesia in 2010. The Centre is considered to be among the first advisory groups in Indonesia with a keen interest in building Indonesian research capacities across many sectors.

Interview with Julius Leto and Fallo Dance from an NGO, CIS Timor (Center For Internally Displaced People’s Service) who talks about their work with youth in Belu, East Timor Province, Indonesia. Cis Timor believes in the power of dreaming and hard work to change the face of Timor Island.

8) Perhimpunan Mandiri Kusta (Permata) or the Association Against Leprosy

Interview with Al-Qadri Sewa, South Sulawesi Area Coordinator for Permata (Association Against Leprosy), who tells about their activities and how they relate to the Voice program. PERMATA (Perhimpunan Mandiri Kusta) Indonesia was established in 2007 to fight the stigma associated with leprosy and eliminate discrimination against those suffering from the disease.

Learn more about the Voice Linking and Learning Program here.