Near Horizon: Stories of Common People 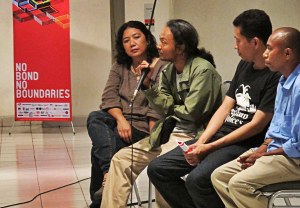 EngageMedia commemorated Human Rights Day on December 10, 2013, by showcasing 12 films from our projects, including Papuan Voices, Moviemento, Crossroads, Bhinneka Tinggal Duka and Video Remix G30S. The event was in held cooperation with Film Festival Dokumenter, a festival from Yogyakarta that is now acclaimed throughout Indonesia.

About 50 people attended the screening which was titled, ‘Near Horizon: Stories of Common People’, to reflect the stories we’ve helped produce of ordinary citizens, whose voices are often neglected by the dominant authorities. 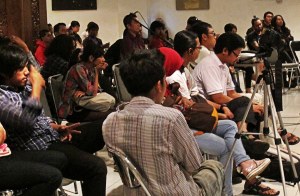 An open discussion was held after both sessions, and comments from the first indicated that information related to West Papua presented by the mainstream media usually only revolves around issues of violence and the OTSUS fund.

The Papuan Voices videos were, on the other hand, considered to have reflected the actual struggle in the daily lives, and the humanism and cultures of the West Papuan people.

The film, ‘Save The Karon‘, received great response and sympathy, resulting in the audiences’ inquiring about how they could help the Karon tribe.

The second discussion on the rest of the videos were more related to technical details, such as the use of pictures in one of the films, and how migrant workers were convinced to be involved in the production of the films.

We then concluded the event for the day, looking forward to showcasing more voices of the common people during Human Rights Day next year.