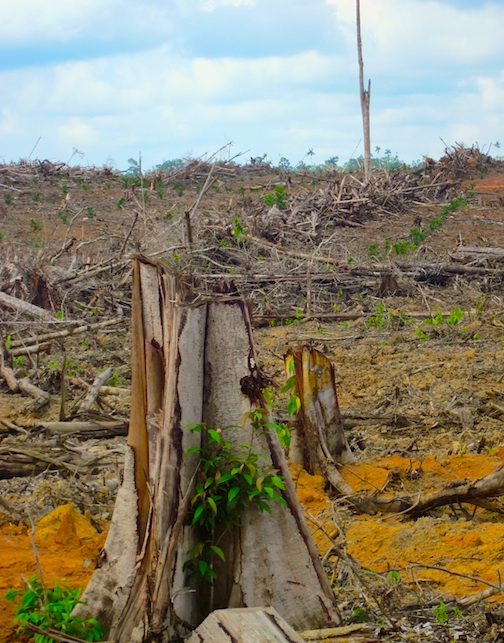 Indonesian and foreign plantation companies have set their sights on Merauke in the southern part of West Papua. Over a million hectares land is currently under threat as part of the Merauke Integrated Food and Energy Estate (MIFEE) project, sponsored by the national government. Local Malind people mostly oppose the plans, especially after seeing how existing plantations in the area have destroyed the forest and impoverished the people.

To support their struggle to determine the future of their land, awasMIFEE is an initiative to research and report what is going on in Merauke. Originally the aim was to make information about MIFEE available in English (as previous studies had only been in Indonesian) and to research which corporate groups were behind each individual plantation. That became a report “An Agribusiness Attack in West Papua” and a website: awasmifee.potager.org

Since that was published, awasMIFEE follows the latest developments around MIFEE, bringing together news from NGOs, media and the Malind people themselves, posted in Indonesian and also translated into English. It is a voluntary project in solidarity with Papua indigenous people – and as an information resource, the hope is that it will also facilitate wider solidarity from whoever else feels concerned for the fate of the Papuan people and their forests.

Another aim is to shine a spotlight on the plantation industry in Merauke: In remote areas such as rural West Papua it is all too easy for companies to act with impunity, taking advantage of indigenous people’s isolation and a non-transparent system of allocating plantation permits, but the more attention they get, the harder this is.

More and more stories are emerging of indigenous communities standing up to these big oil palm, sugar and industrial forestry plantations. These are inspiring stories from a dangerous land which has seen over 50 years of conflict, but that is another reason to ensure that people from around Indonesia and internationally stay aware of what is happening in the area.

Elsewhere in West Papua, indigenous communities are also facing threats from plantations, mining companies, logging companies and so on, and are often even more isolated than in Merauke. AwasMIFEE has recently started translating occasional articles about local opposition to resource industries from other parts of West Papua.