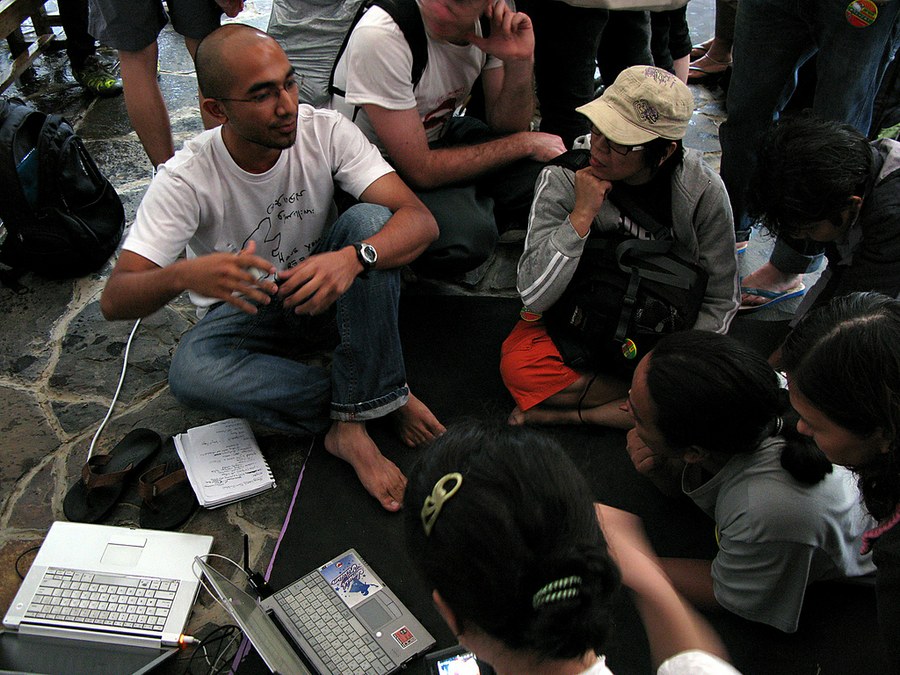 Independent, grassroots online initiatives find themselves in a strange place these days. As the first wave of online projects like Indymedia wane in the face of the ‘web 2.0’ “mallification” and “net-sploitation” it can often feel as though the day’s activists, at least those closely linked to social movements, took a cutting edge role in shaping the web are far gone. 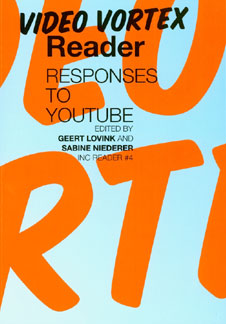 The book Video Vortex Reader is available for download at the Institute of Networked Cultures site.

In 1999 a free software application called “Active” formed the basis for a publishing revolution, being used to run the first Indymedia site in Seattle, and was then used to set up dozens more. Nine years ago there were few spaces ordinary users could publish online without significant technical knowledge. Autonomous networks promoting independence, privacy and free collaboration these days however seem vastly overwhelmed and outgunned by agile commercial forces more able to engage the desires of web users. Interestingly it was the model of decentralised production and collaboration that gave grassroots initiatives their advantage and agility, they now seem near static and lost.

What to do given this state of affairs? Now that “You” (according to Time Magazine) – or is it “We”? – have apparently taken over the web? Has “the end of history” arrived for the net? With activist development of cutting edge online spaces seemingly sidelined or flailing, where to? It’s beginning to feel like a new round of press consolidation has truly taken hold now that Big Capital has rediscovered the web in earnest after the dot-com crash.

Grassroots activists, who at one point led the way in re-imagining and re-inventing the media and the net, seem to have great difficulty making their mark in developing the next generation of tools. In any case, if Big Capital is giving the people what they want why fetishise a kind of cottage industry development? The internet now based is open publishing, perhaps we’ve already won?

The question though is whether activist spaces are destined to go the way of print, radio and TV, where the major players take hold and the alternatives become just that, alternative, pushed to the margins, destined for decades of struggle to take a modicum of space? When BBC, CNN, ABC, Murdoch and Google run our ‘open’ media has that much really changed? Are we simple seeing “Amalgamation and Capital” in the Netscape? Is the only future consolidation amid the online video and social networking gold rush?  Is this history already written? Or could the spectre of a global recession scuttle these plans?

Transmission
One project with the aim of challenging the centralisation and commercialisation of online video is the Transmission network. Begun in June 2006 at a four-day meeting in Rome, Transmission is a network of video activists, programmers and web producers using online video distribution for social justice and media democracy. The network aims to build the necessary tools, standards, documentation and social networks to make independent online distribution possible.

Practically the Transmission network is engaged in a range of projects. These include producing a shared metadata standard to enable searching and aggregation across participating projects, a customised version of the Miro video podcast application, freely licensed documentation of FOSS video tools, research into FOSS video codecs and a few more. The network is fairly informally organised and operates as space for collaborations to form between groups and individuals and for communication around key issues.

Four gatherings around these themes have been held to date in Rome, London, Amsterdam, and most recently in Sukabumi, about 3 hours out of Jakarta, Indonesia.

Whilst I certainly don’t posit Transmission as the Rebel Alliance fighting the Web 2.0 Death Star, it hopefully illustrates one set of strategies, that are linked to broader social movements, being used to push for free and open internet.

Transmission Asia-Pacific (TXAP) was a five-day camp in May 2008 of 55 video activists and web developers on the edge of the Gede Parango National Park in West Java. The gathering aimed to bring together video activists with web developers and project organisers in order to improve the state of independent online video distribution and to skill up participants in the use of free software tools and digital distribution strategies.

The event was organised by the Melbourne based EngageMedia; a video sharing site focussed on social justice and environmental issues in the Asia-Pacific, as well as being free software, training and networking project, in collaboration with Jakarta’s Ruangrupa, a media art organisation whose projects include the biannual “OK.Video” festival at the National Gallery of Indonesia.

The core aim of the meeting was to bring together video makers and developers working on social justice issues in the Asia-Pacific region. The hope was that video makers would gain an understanding of the potential and role of free software and the process of development and that developers would better understand the needs of video makers and thus produce better tools. It seemed to us that independent production and distribution required that these two groups come together to better understand one another.

The five days covered around 50 sessions including workshops on open source content management systems, using and developing open-source video codecs, coordinating content sharing between festivals in the region, online/offline distribution (particularly in relation to the low-bandwidth situations many people in the region find themselves in), video compression with FOSS tools, copyright/left, a look at the Indonesian video art/activist scene, co-ordinating online video coverage of the G8 meeting in Japan, video making and distribution under repressive regimes and project sustainability.

Why a meeting in Asia?

There has been an explosion of access to consumer-grade video tools globally over the past 5 years, particularly in Asia when it seems most of these tools are manufactured. There are a plethora of projects using video to advance a variety of social and political goals in the region as well as a variety of commercial online video spaces serving the region. Fertile ground exists for a series of networks, partnerships and independent spaces to emerge.

TX-AP brought together approximately 40 projects from 15 countries around the region. These ranged from Japanese video-sharing spaces to Indian tech development projects, Indonesia community video initiatives to Malaysian video news sites. The aim was to forge cross-border networks as organically as possible.

In many ways, the Asia-Pacific is a space where “Amalgamation and Capital” in the online sphere is yet to consolidate itself as forcefully as it has in the US and Europe. Here there remains perhaps more conflicts, ambiguity and more emergent possibilities.

More practically, given the repressive nature of many governments in the region online video holds a particular potency. Thailand, Burma and Nepal among others have blocked net communications, and particularly video, during times of social unrest in recent times. Video last year from the uprising in Burma was particularly important in mobilising solidarity internationally.

That said there are few specifically activist video projects in the region resulting in a heavy reliance on commercial spaces. Whilst the commercial spaces certainly help to get content out there, and are used in both subversive and non-subversive forms, a litany of instances have emerged over the past few years of the large players (Google, Yahoo etc.) cooperating directly with authorities to censor material or even dob in dissidents. Spaces willing to protect users anonymity and keep content online despite the pressures of governments or companies are very much needed.

The structure of the event was peer-based and participatory with workshops organised and run by attendees. This was a very deliberate choice, being a mechanism to foster a sense of ownership over the space by enabling participants to direct the content of the meeting as much as possible. Coming from a philosophy of open source development it would seem that models of participation, and ultimately ownership, are what make a project successful or not. If the aim is to challenge proprietary video spaces and tools with a base of traditionally resource-poor organisations, the collaborative potential of these networks to work with highly sophisticated technologies is of great importance. The production methods carry particular social values (democracy, participation) but they are also highly practical.

For the most part, this worked, as well perhaps as can be expected in transplanting, or maybe transmitting, a particular cultural model of social interaction to a group of people coming from a variety of different contexts; some privileged in their access to technology, others not, all with varied styles of organising and understanding the problems at hand. What goes on in organised spaces, however, no matter how informal or participatory they might hope to be, is never the sum of an event, but one part of the conversation. Temporary and transient spaces and interactions often hold just as much sway over how an event is made. It’s more likely here in the fact that the real cultural and philosophical exchanges develop.

Conclusion
Transmission Asia-Pacific was a small, but hopefully significant step forward in fostering new networks of free collaboration and independent production and distribution. New models of autonomous communication and self-sustaining production are desperately needed at this point lest we be left pining for a pre-industrial internet, before Capital discovered how easy it was for other people to make your content for you for free, and called it web 2.0.

How can we move to a space where independent production is not an “alternative” but remains a key part of the equation? How do we ensure these spaces are not marginalised the same way independent initiatives in print, TV and radio were in so many places throughout the 20th century? Is there something inherently different in the architecture of the web that inoculates it against this fate? Popular opinion suggests it does, but only popular action will ensure it does.