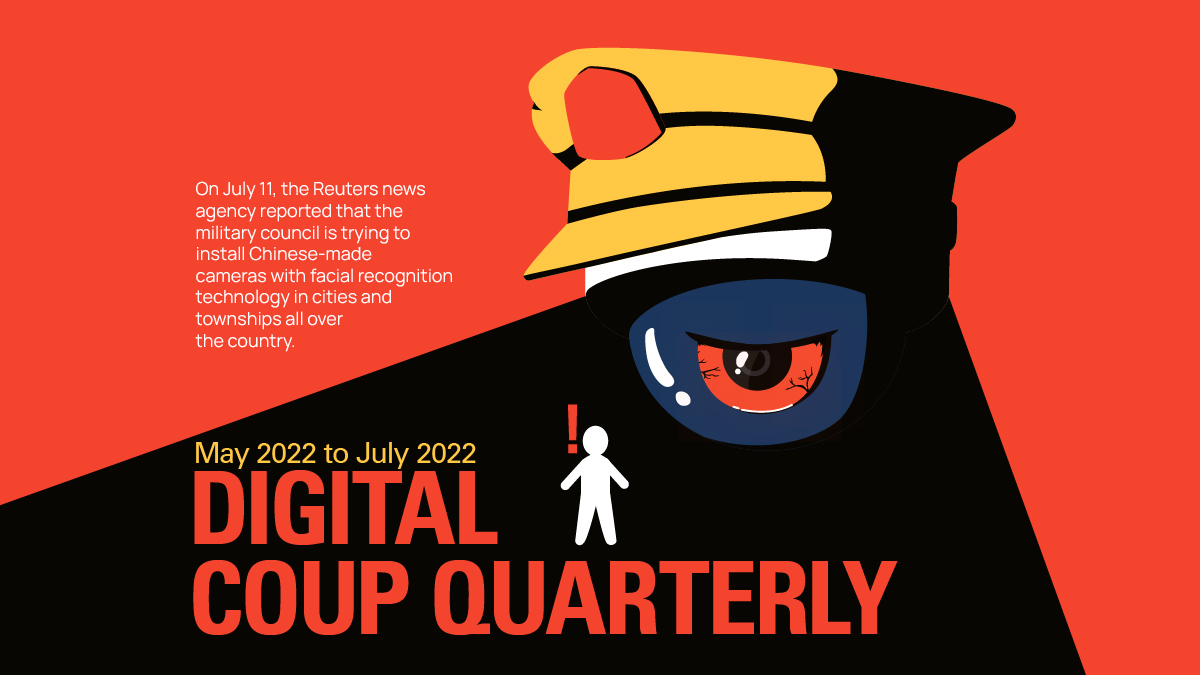 EngageMedia is publishing English translations of the Myanmar Digital Coup Quarterly produced by the Myanmar Internet Project. This post covers updates between May to July 2022 and highlights digital oppression incidents documented during that period. Read the original post in Burmese here, and learn more about EngageMedia’s broader work to support digital rights in Myanmar on EngageMedia.org/Myanmar.

In Myanmar, 2022 has been one of the worst periods of military rule, which has been ongoing for a year and a half. As life under the coup continues, the people of Myanmar are facing economic hardships along with currency devaluation.

Amid the increasing insecurity in daily life, more incidents of oppression are occurring in the digital communication sector. This article summarises the digital oppression incidents that occurred between May to July 2022 (a three- month period).

Summary of digital oppression issues in May 2022

Series of arrests over online speech and comments

The military council has not only been conducting arrests on the ground, but has also been arresting people over online speech and comments opposing the junta. This has been done continuously since the start of the coup. According to BBC News, one notable case was the May 6 arrest of four people, including film director Maung Thi, for writing online content against the military. Moreover, there have been monthly arrests of those encouraging action through lobby accounts supporting the military council. 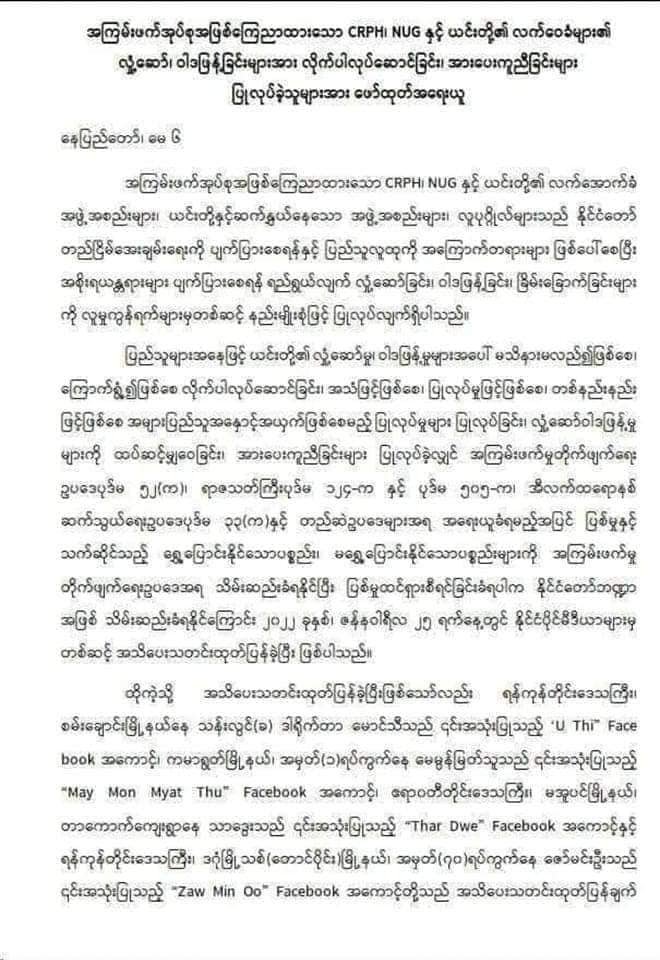 Narinjara office was raided by the military council

On the morning of May 7, the military council raided the Rakhine state-based news agency Narinjara. On its Facebook page, Narinjara announced the suspension of news production and publication due to the raid. After the coup, the military council has intensely suppressed the news media’s freedom of reporting. Because of this, local news agencies have found it difficult to continue operating, resulting in the closure of some local news media while others struggle to continue operations by relocating offices.

Narinjara releases an announcement on the May 7 raid by police on their old office in Sittwe. The office will be temporarily closed.

In a May 11 meeting at Building No 26, Ministry of Planning and Finance in Naypyidaw, the military council discussed tax collection and registration through the IMEI [International Mobile Equipment Identity] number included in every mobile phone. This meeting was attended by the Deputy Minister, Deputy Secretary, Director General of Planning and Finance Department, and Deputy Minister of Transport and Communication Department. According to sources, the Solution Hub company, which wanted to lead the project, also explained the operational process.

By registering the IMEI numbers, mobile phone users’ movements can be traced in real time. Such a move would support the military council’s implementation of digital dictatorship and also harm people’s basic freedoms.

Aside from an attempt to trace IMEIs, the military council is also developing a mobile application that can track people’s movements within the Yangon area. Although that mobile application is supposedly intended for detecting traffic violations, online users believe that there are other intended uses.

Attack on the Facebook pages of People Defense Forces (PDF)

In mid-May, the Facebook pages of the People Defense Forces were attacked. It appeared to be carried out by technicians under the military council. The PDF groups told news agencies that they have been confronted by different forms of online attack, such as hacking and attempts to report their pages.

On May 16 in the Pekone township at the border of Shan and Kayah States, electricity and internet were cut off following a series of battles between the military council and the local defence forces. Since the beginning of the coup, the military council has been using internet shutdowns as a weapon. It has also been exercising control through intermittent, lengthy, and part-time internet shutdowns in battle areas, including most of the towns in Sagaing region. Moreover, in Kyan Khin village of Saw township, local sources reported that internet connections were cut within a three-mile distance from the military deployment site.

On May 24, both the internet and phone lines were cut in areas where fighting was ongoing, such as Kantbalu, Myinmu, Kyun Hla, Mongywa, Khin Oo, Yay Oo and Kawlin, including the towns in Sagaing Region.

On May 28, phone lines were cut during a military patrol in the area of Mongywa – Amyint road in Sagaing region. This happened in Mongywa, Kani, Pale, Yinmar, and Sarlingyi townships in Sagaing region and Pauk, Yesagyo, Gantgaw, Htee Lin and Mying in Magway region.

Regarding digital oppression in June 2022, one notable incident is Telenor’s exit from Myanmar. Now under the name of Atom, it has now been placed in the hands of people who have struck a compromise with the military council.

Since the handover process of Telenor was already mentioned in previous months, the name change process on June 3 will not be specifically mentioned here.

On June 7, the military council’s attempt to build a digital dictatorship in Myanmar was condemned by United Nations human rights experts. The news that UN member states need to take urgent action against such an attempt to return to the “digital dark era” is an interesting development.

Although this encouragement can be seen in a positive light, it is not likely to lead to reform that can stop the military council’s digital oppression given the limited powers of United Nations authorities. This is just a small force among the many forces needed to push the people of Myanmar towards the path they expect. Regardless, this force should be recognised; as the saying goes, “One sesame does not make oil”.

On June 10, the Central Bank announced that the unauthorised use of mobile pay/mobile wallets may be subject to imprisonment and fines. Before releasing this statement, NUG was trying to implement the NUG Pay Application for an online payment system. The Central Bank’s statement seems to limit the existence and use of NUG Pay.

Amid these interferences from the military council, NUG launched DMMK, the Myanmar digital currency, and also said it would soon announce the availability of the NUG Pay application. On June 26, it was announced that NUG Pay can be downloaded from the Play Store. 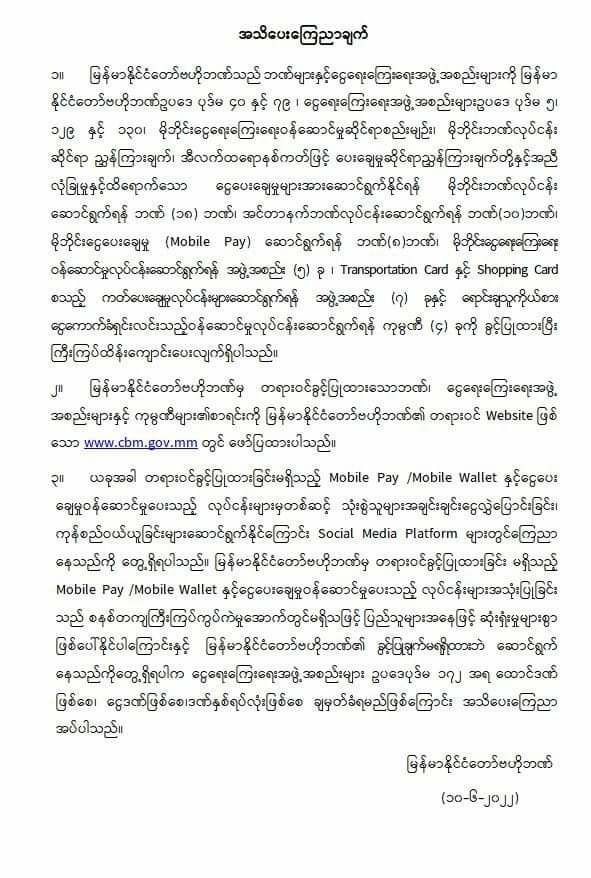 The Central Bank releases an announcement imposing imprisonment or fines for unauthorised mobile pay/mobile wallet and money payment services. The authorised banks, financial companies, and organisations are described on the Central Bank website.

Corruption of military leaders through the communication sector

On June 18, a news article from the Justice for Myanmar team revealed that military leaders, led by the president of the military council General Min Aung Hlaing, are using the Mytel communication company for corrupt activities. Through this communication service, details of the military structure were also being leaked to the Vietnamese military.

In a statement, the Justice for Myanmar group said that for almost four years, the Mytel business gave out millions of SIM cards for free to members of the Myanmar military, government officials, and civil servants. The users of these SIM cards were being monitored by military intelligence.

On July 11, the Reuters news agency reported that the military council was trying to install Chinese-made cameras with facial recognition technology in cities and townships all over the country. According to Reuters, the companies implementing this project are local companies such as Fisca Security & Communication and Naung Yoe Company.  These companies have been provided technical support by Zhejiang Dahua Technology, Huawei, and Hikvision.

Human Rights Watch’s deputy director for Asia, Phil Robertson, said that this poses dangers for democracy activists. Such a move may possibly enable the military and police to detect and trace activists’ vehicles, identify connections, and find their hiding places.

Arrests of teachers of 4U Federal School, which has an online-centred teaching method

Following the arrest of the principal of Kaung for You, a school established as a federal school for the NUG’s intermediary education program, at least 20 teachers were reported arrested on June 13.

There are about 30,000 students studying in Kaung For You. On July 14, Dr. Zaw Wai Soe, NUG’s Education Minister, announced the school’s closure. Additionally, NUG’s Human Rights Watch department said that the detention of teachers is a violation of rights to education. After these cases, there have reportedly been threats and attempts to extort money through SMS messages sent to students.

On July 21, Reuters reported that the military and Ooredoo Company (ORDS.QA) were discussing the sale of shares for the telecom company’s exit from Myanmar. Ooredoo is the third most-used operator in Myanmar and is also the last remaining foreign investment private telecommunications operator.

According to Reuters, potential buyers of Ooredoo include the Young Investment Group (one of Myanmar’s business groups), the Singapore-based Campana Group, and SkyNet. This development is a realisation of the military’s desire to have foreign investments withdraw from the communication sector. With Ooredoo’s exit, current mobile phone users should be aware that Myanmar’s communication sector has fallen back into the hands of the military group and its subordinates.

On July 21, the US-based company Vimeo banned MRTV from using their services for productions and broadcast. This move can be considered a response from the international community over the digital suppression arising from the military coup.

On July 25, the military’s propaganda newspapers announced the execution of Ko Jimmy, Ko Phyo Zayar Thaw, Ko Hla Myo Aung and Ko Aung Thura Zaw. Following this, most social media users changed their Facebook profile pictures to red (or) black to express their sorrow over the execution. In response, the military council checked the phones of pedestrians and arrested those who changed their profile pictures.