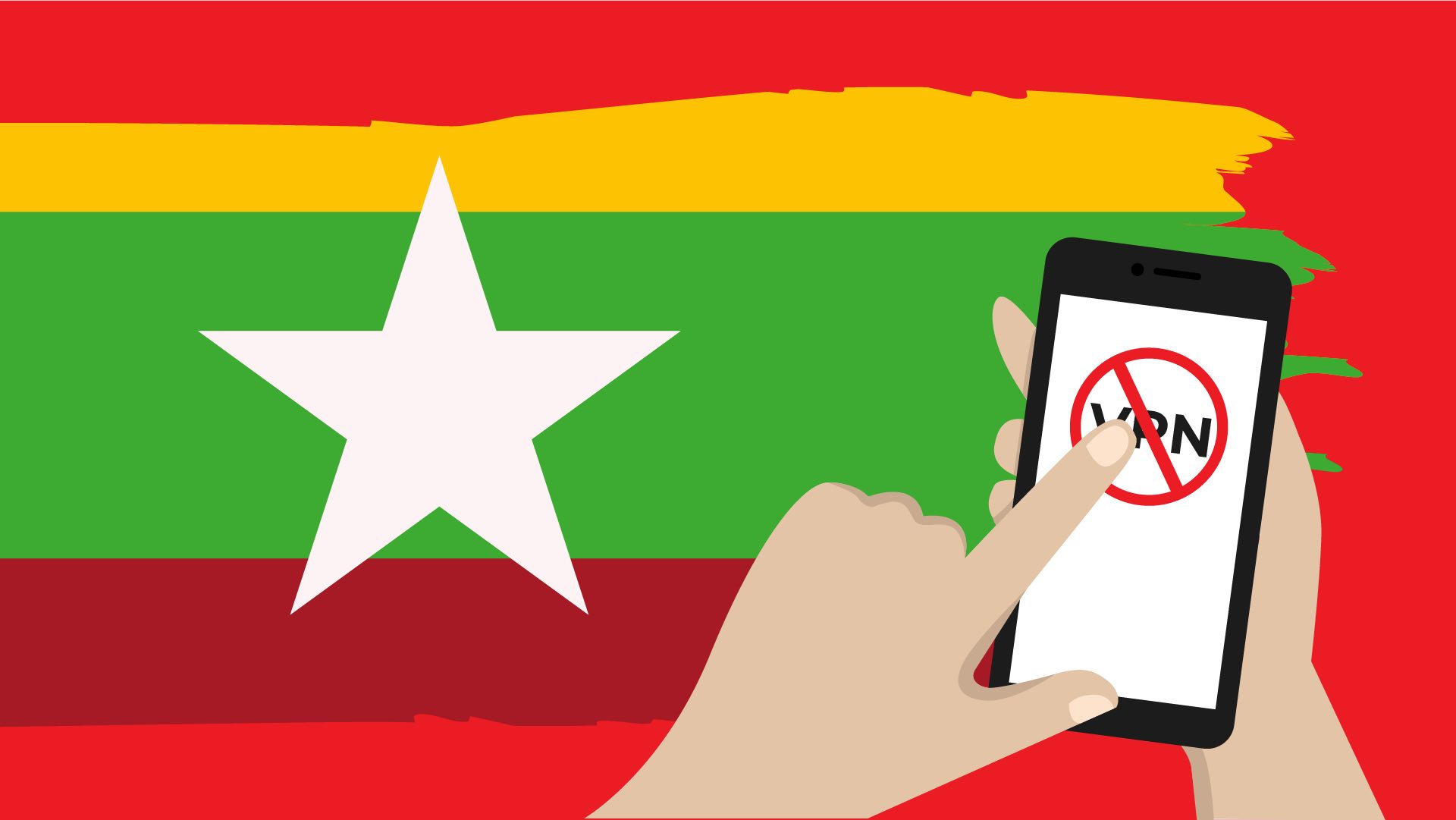 One year since the military coup, the people of Myanmar are facing further threats to digital and human rights as the military junta moves to reintroduce the draconian cybersecurity law – the latest in a string of moves that aims to legalise further curtailments to freedoms in the digital space.

A previous version of this law was shelved last year amid opposition from business groups. If its current version is enacted, the junta will have yet another tool in its arsenal to impose tighter controls in the digital space.  This latest attempt to control the digital space is the next step for a regime that has been steadily derailing democracy and digital rights in the country.

Digital rights advocates warn the move would “enshrine in law the death of online civic space”. It is far from the first time the junta has sought to chip away at avenues for people’s free expression. As a young Burmese activist, I have personally experienced and witnessed the junta’s moves to consolidate control over civic spaces, and how the yearlong coup has affected the lives of our people.

In continuing the fight against such curtailments, there are lessons to be learned from the military’s past actions, as well as the responses to the coup.

A particular concerning provision in the proposed law involves the regulation of virtual private networks (VPNs), which many of our people have been using to access unregulated websites and communication platforms since the military blocked Facebook and social media sites last year. The draft bill seeks to outright ban the everyday use of VPNs, requiring any usage of such to be registered with the authorities. Anyone caught using or encouraging the use of VPNs faces a prison sentence of up to three years. This provision not only limits our access to information, but will also directly affect the livelihoods of those who rely on online spaces and social media to conduct business.

Aside from the provision on VPNs, the proposed law will also give the junta access to people’s personal information, with no data protection rights afforded to those in Myanmar and unchecked inspection powers granted to authorities. This provision effectively endangers anyone carrying content that the junta does not approve. Even prior to the law’s passing, we have received reports of protesters arrested and tortured because of photos and video clips stored on their mobile phones.

The military has shown that it already has the capacity to implement the cybersecurity law once enacted. Citing leaked budget documents from the activist group Justice for Myanmar, The Intercept reported that the military and police sought to buy forensic and surveillance technology from Chinese and Western companies between 2018 to 2021. One such company was MSAB, which in 2019 sold forensic tools to Myanmar police that allow the military to extract vast amounts of data from smartphones, including call, contact, messages, GPS, and other records.

MSAB has since revoked the licences for these forensic tools following the coup. And yet, police continue to use similar technology in their routine inspections, looking for VPN apps on people’s phones. According to reports from fellow activists, anyone found with a VPN installed will be asked to pay the police 100,000 MMK (USD 56), else be further threatened or sent to jail. Other reports from the ground narrate how the military is seizing detainees’ phones and using this kind of technology to obtain sensitive information. 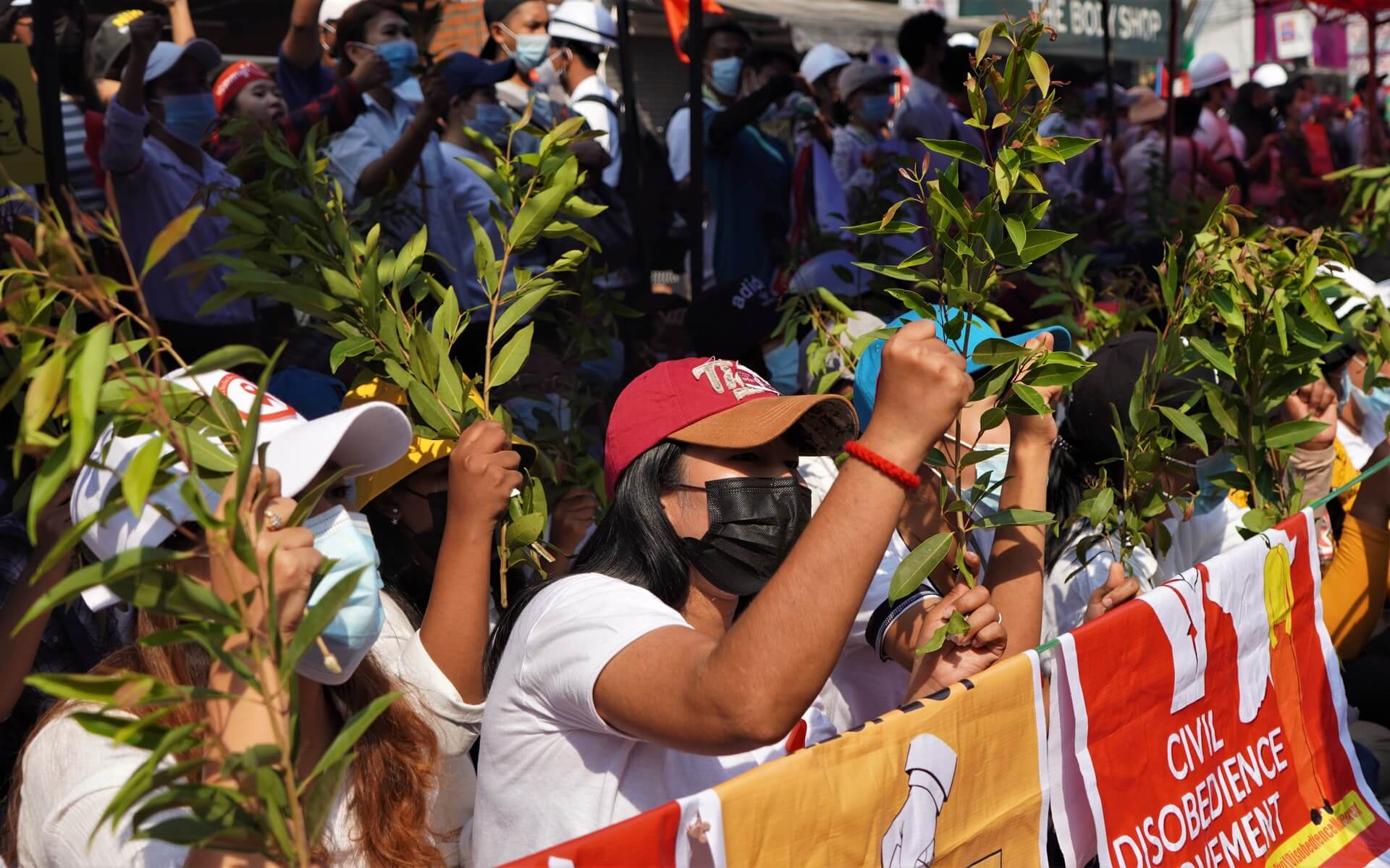 Protesters on the streets of Yangon voice their opposition against the military regime. Photo by Saw Wunna on Unsplash

With these current developments, activists and rights groups continue to call for urgent action on the regime’s use of digital tools to further violate people’s rights. As of writing, digital rights activists in Myanmar have organised reviews of the draft cybersecurity law and are coordinating with business groups to collectively voice their opposition.

I join these calls as an activist involved in the ongoing revolution to advocate for digital rights and oppose the draft law and the military dictatorship. The cybersecurity law, on top of all other attempts to further encroach on our freedoms, must be stopped. In our individual and collective efforts to ensure this, I want to highlight three realisations related to digital rights.

1. Digital rights are part of human rights, and the current regime is targetting both by using social media and restrictions to online spaces. Authorities have already shown their ability to wield social media – especially Facebook – to incite violence against persecuted minorities. Even before the coup, the military and the National League for Democracy-led government imposed internet shutdowns in the Rakhine and Chin states for over 500 days, significantly affecting over a million people living in the conflict zone. Many internet users were not as vocal then, but that cannot be the case today – not when we have since felt the repercussions of internet throttling and shutdowns, and seen how crucial online spaces are in the context of the ongoing pandemic and the past elections.

With this latest draft of the cybersecurity law, the junta is going beyond social media and into the wider digital and civic spaces, seeking control of all electronic communications and online platforms and services. Now that we from Myanmar have felt (and continue to feel) the repercussions of internet throttling and shutdowns on a national level, we need to be even more vocal than ever before and stand together to show solidarity and resist this infringement on our rights.

2. Pay close attention to the junta’s use of tax money, especially when it is being used to fund technology and other measures that can curtail our human and digital rights. The government’s purchase of surveillance technology was supposed to protect the people from terrorist threats, but these have been used instead to set up a death trap for the democracy movement.

3. The Myanmar people’s efforts also need support from those outside the country. The international community must stand together with us and do its part. Civil society and rights advocates can help spread awareness on what is happening in the country by following trusted news sources and #WhatsHappeninginMyanmar on social media, and add their voices to the global pushback against the cybersecurity law. Governments and businesses must also step up by banning the sale of digital forensics tools and surveillance software and applying firm industry and diplomatic pressure to send a strong message to the military junta.

The latest developments may be worrisome, but many like me continue to keep the pro-democracy movement alive. Protesters are helping keep each other safe, promoting the use of burner phones and more secure communication channels when going to rallies and community gatherings. The military regime may have ruled over Myanmar for 60 years, but we remain determined to uphold our human and digital rights, which are crucial in supporting the work to restore peace and democracy in the country.

Ba Hein is EngageMedia’s Digital Rights Coordinator for Myanmar. A youth advocate and digital rights defender from Yangon, Hein has been working closely with Myanmar media communities, as well as human rights and regional rights activist groups across Southeast Asia, to promote digital rights advocacy and media literacy. Learn more about him via our team page.