Impact Story: Seeing things together with the blind

The Unseen Words documents the activities of a traditional Javanese ketoprak troupe, Distra Budaya, which consists of blind members and operates under the guidance of the Mardi Wuto Foundation in Yogyakarta. Funded in 2017 through a grant from the Yogyakarta City Department of Culture, the film eventually won Best Documentary Short Film in the Indonesian Film Festival that same year (2017).

Filmmaker Wahyu Utami first became acquainted with Distra Budaya when she watched them perform at the open-air stage of the 2014 Yogyakarta Arts Festival. Utami was immediately taken aback by the troupe’s performance. Although it was a no-frills performance, for her it was something extraordinary. The event also raised many questions in her head, including the preparations that the group undertakes to stage such a performance. One scene in particular persisted in Utami’s memory, in which the troupe made use of their inability to see as the basis of a joke. For Utami, once somebody is able to laugh at oneself, they have accomplished an extraordinary feat.

Utami’s curiosity drove her to get to know the troupe better, and by the end of 2016, she expressed her wish to tag along with them. She received a positive response from the members of Distra Budaya and was then permitted to take part in all their practice sessions.

For almost a year, Utami attended each practice session, which took place once a month in the library of the Mardi Wuto Foundation, located in the Dr. Yap Eye Hospital complex. As Utami had no previous close contact with persons with disabilities, she initially struggled to communicate properly with members of the troupe. For her, the most difficult process was dismantling the paradigms firmly embedded in her mind on the nature of disability itself.

In general, Utami’s knowledge about disability came only from the media and other people’s words, which often spoke of disability in the language of limitation, pity, and other non-empowering terms. Without realising it, these ideas influenced the way she perceived her friends living with disability. As a filmmaker, Utami asked herself: How could she deliver a story about equality if she herself does not yet perceive them as equals? Thus, she tried to dive deep within herself and dismantle perspectives and biases which were unconsciously embedded in her mind. The process of dismantling these pre-existing paradigms in her head was quite an arduous one.

It was only in 2017 that Utami had the courage to join a film facilitation program organised by the Yogyakarta Department of Culture. She passed the selection process and obtained a grant for film production over the course of three months. Her documentary film was created using an observational approach. Although she already obtained permission from the Distra Budaya members to film, she always informed them each time the camera was recording. Moreover, while shooting the videos, she avoided taking close-up shots of the members’ faces as she did not want to place an emphasis on their disability. Instead, she wanted viewers to focus more on the relations between the subjects and their surroundings. 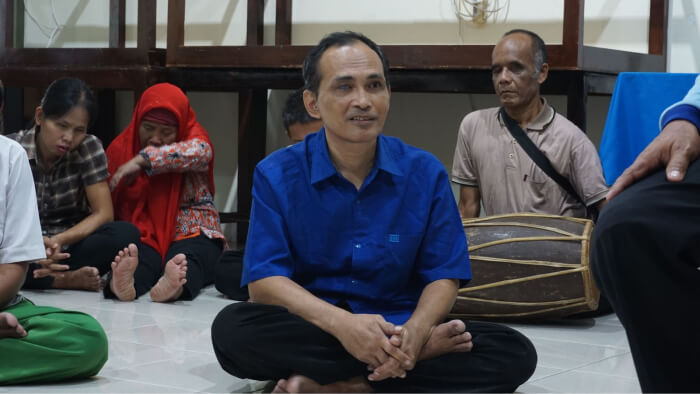 A still from ‘The Unseen Words’

Utami invited the members of Distra Budaya to attend the film’s first screening. To watch a film together with the blind community was a novel experience for her friends, and perhaps a novel experience as well for the majority of viewers in attendance that night. From the onset of the film’s production, Utami realised that her film was indeed made to be watched together with the Distra Budaya members. She was very happy to see that while “listening” to The Unseen Words, her new friends laughed along during the comedic scenes, applauded when the film ended, and returned home with happy faces, a sense of pride, and an empowered feeling. Through the film, the general public was also able to see and appreciate the process that the troupe goes through to stage a performance, as well as their openness towards collaboration. The Distra Budaya members had felt the need to expand their network and, through the film, they were eventually able to form additional networks.

Utami confessed that she did not hold overly great expectations for her film, but it received very high appreciation from viewers upon its release. The 2017 Indonesian Film Festival ‘FFI’ chose The Unseen Words as its best documentary short film. Since then, the existence of Distra Budaya became known to producers of the popular Indonesian program Kick Andy on national television (METRO TV). As a result, the Distra Budaya troupe was invited to speak during the show. The group also received financial support for the purchase of musical instruments and ketoprak costumes, while the remaining amount was put aside as cash savings.

The Unseen Words has been screened in a number of film festivals such as NETPAC – Jogja Asian Film Festival and the Indonesian Documentary Film Festival. The film has also been requested at several screening events and discussions organised by film communities, independent as well as academic, from various regions. These include the Yogyakarta State Islamic University’s Disability Services Center, Indonesian Islamic University in Yogyakarta’s Communications Science Study Program, University of Jambi’s Student Activity Unit, the 2017 Aceh Film Festival, the Solo Merdeka Festival, Kediri Department of Culture, and Sineroom Semarang.

During this period, media outlets came to feature Distra Budaya and several university students and academics conducted research on the troupe. After several film screenings, one incident in particular left the biggest impression. During a Q&A session at the 2017 Documentary Film Festival, a mobility-impaired viewer named Yovin expressed his appreciation and said that he became more confident after watching the film. Moreover, when the film was screened in Semarang, it compelled the local blind community to try their hands on the arts again.

In 2018, the Distra Budaya practice room was transformed into an examination room for the Dr. Yap Eye Hospital, and the Mardi Wuto Foundation’s secretariat relocated. At the time of writing, the Distra Budaya troupe uses a private home as their gathering place. During the COVID-19 pandemic, the troupe temporarily went on hiatus but has now resumed its activities.

In 2022, Distra Budaya aims to legally register itself as an organisation so that it would be able to access cultural development funds from the government. 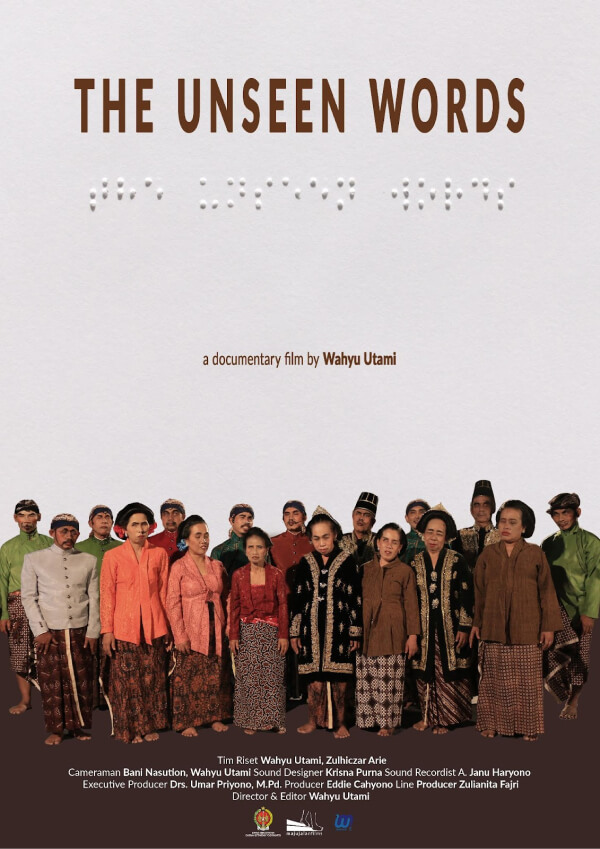 1 thought on “Impact Story: Seeing things together with the blind”