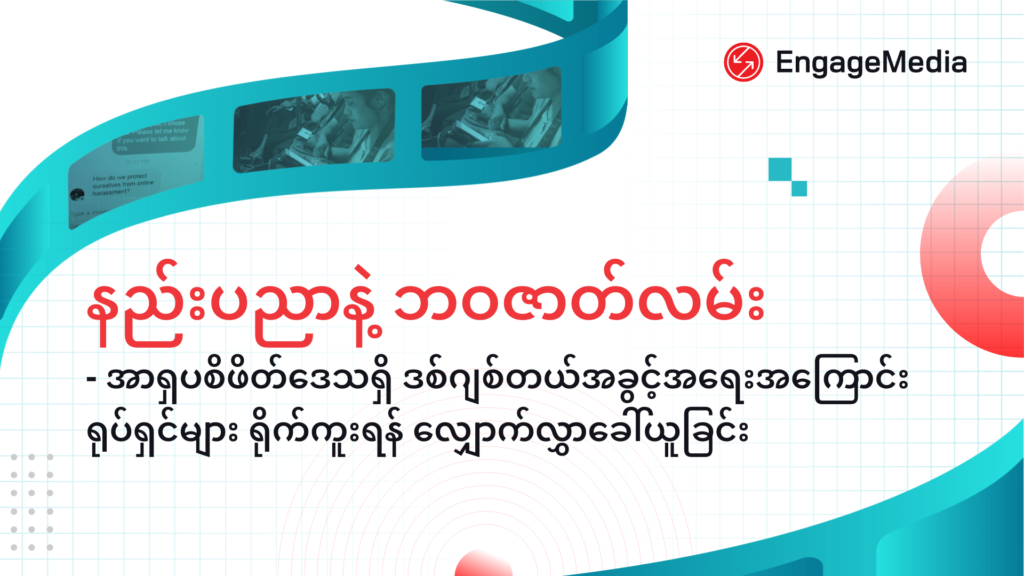 If you are a filmmaker, video journalist, or animator from Myanmar, EngageMedia invites you to submit a proposal for a short film on pressing digital rights issues currently happening in the country.

One chosen filmmaker will join a talented roster of Tech Tales fellows, and will receive between $4,000 to $5,000 (USD) to produce a 5- to 12-minute film on a digital rights topic of their choosing.”

We are open to a variety of genres, such as documentaries, fiction, animation, and other short narrative video productions.

The produced film on Myanmar will be part of the collection, “Tech Tales: Films about digital rights in the Asia-Pacific”. More details on the timeline and specific processes will be discussed with the successful candidate.

To apply, please accomplish the form below by Sunday, 23 May 2021, 23:59 Bangkok time (UTC+7). Additional ways to apply can also be found below. The successful candidate will be notified before the first week of June 2021.

If you encounter any errors in the application form, please reach out.

1. What are digital rights?

2. What kind of digital rights issues I am expected to work on for the proposed film?

There is no singular list of digital rights issues. We list below a few examples, but acknowledge that not all may be relevant to Myanmar. As such, we also encourage you to look beyond this list and identify issues that are relevant to Myanmar, especially given the current situation on the ground.

3. Can I remain anonymous?

Given the current situation in Myanmar, you can remain anonymous on all of Tech Tales’ public communications and promotions. During the application process, you can also choose to apply through sending an email in techtales.films@protonmail.com.

4. What genres and film formats are accepted?

We are open to all genres, including fiction, documentary, and hybrid/experimental genres. The important thing to consider is that the proposal should capture how the film would be useful as a learning resource in addition to being watched as a stand-alone film. As a creative producer, you know your idea better than anyone else. Genre should not be a limit.

Certainly. Five to 12 minutes is merely an ideal duration, as the chosen films are also intended to be used as learning resources. If you strongly feel that your film needs to be longer, please indicate so in your application.

6. What are the distribution rights for the films?

After the screening launch, films will be uploaded to Cinemata, EngageMedia’s open-technology video platform that focuses on social and environmental advocacy. Similar to corporate platforms such as YouTube and Vimeo, the film may be shared and embedded from that platform. As we are advocates of open content, the film will be distributed under CC BY-NC 4.0. EngageMedia will also work with filmmakers in submitting the films to festivals that feature advocacy videos. After three months, filmmakers will be allowed to upload their films on commercial platforms such as Facebook, YouTube, and the like, under their own names and organisations, as long as they include the attribution along with the license text.

7. Who will be involved in the whole production process?

EngageMedia will be working with an Advisory Board consisting of digital rights experts and accomplished filmmakers in guiding filmmakers in producing the best narrative and direction for their films.

To avoid issues and delays based on command hierarchies, we are accepting applications only from individual filmmakers and producers. Individual applicants may work with an organisation, but EngageMedia will not be involved in the coordination between the applicant and the organisation.

9. How will we receive the grant?

Successful candidates will receive the grants in two tranches: upon signing of the memorandum of agreement and after the screening launch.

10. Can applicants submit more than one proposal?

Yes, applicants may submit a maximum of two proposals. However, only one proposal per successful applicant may be approved.

11. Can I submit a short film that was recently submitted to a postponed or cancelled film festival?

The answer will depend on any copyright and/or co-ownership/sponsorship issues with the film you submitted to the film festival. If the rights to your festival entry conflict with the distribution rights indicated in #5, then your film is unfortunately ineligible for Tech Tales.

Alternatively, you may email the application form to us at techtales.films@protonmail.com, with the subject line: “Tech Tales Myanmar Application”. In your email, please be sure to answer the same questions from the form below.