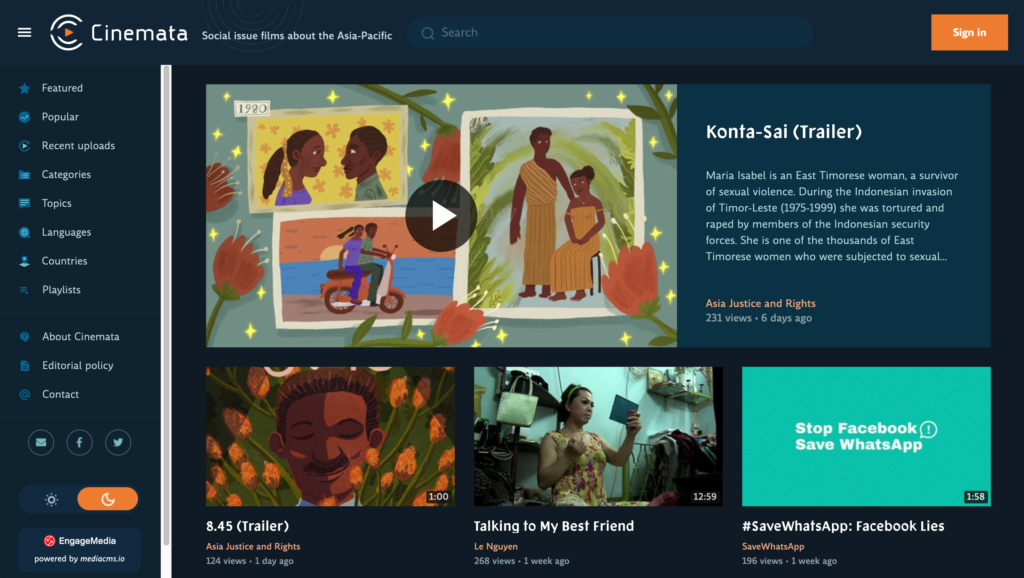 EngageMedia, a nonprofit that promotes digital rights and social issue documentary, announces the launch of Cinemata.org, a platform for social and environmental films about the Asia-Pacific. With almost 5,000 films, Cinemata curates videos in a variety of styles and genres, including documentary, fiction, animation, experimental, and more. Though similar in features to other video platforms, Cinemata offers key advantages.

The first advantage is Cinemata’s curation. “Unlike YouTube, TikTok, and Big Tech platforms, Cinemata doesn’t rely on hidden algorithms for curation,” said EngageMedia Executive Director Andrew Lowenthal. “Such algorithms contribute to distraction and disinformation, even propaganda that could threaten democracy. In contrast, Cinemata’s team of curators highlight well-produced regional films that aim to make a positive social or environmental difference”.

Another advantage is Cinemata’s respect for privacy and personal information. “Big Tech platforms sell users’ privacy and information to third parties with their ad-based business model”, said Lowenthal. “Cinemata does not rely on advertising, does not deal with hidden third parties, and because the platform is built on MediaCMS, a free and open source platform, anyone can verify this – which is not the case for Big Tech’s proprietary software”.

Finally, Cinemata doesn’t just host videos – it aims to facilitate connections and collaborations. “We want people to do more than just watch videos. We want them to engage with social issues and contribute to creating impact”, said Lowenthal. “This means connecting Asia-Pacific viewers and filmmakers with film curators, journalists, academics, advocates, civil society, and Cinemata’s many audiences. Videos can thus support education and advocacy, or just encourage people to think and question”.

EngageMedia is a nonprofit that promotes digital rights, open and secure technology, and social issue documentary. Combining video, technology, knowledge, and networks, we support Asia-Pacific and global changemakers advocating for human rights, democracy, and the environment. In collaboration with networks and communities, we defend and advance digital rights.

For more information on Cinemata, reach out to EngageMedia Video Lead King Catoy or use our contact page.