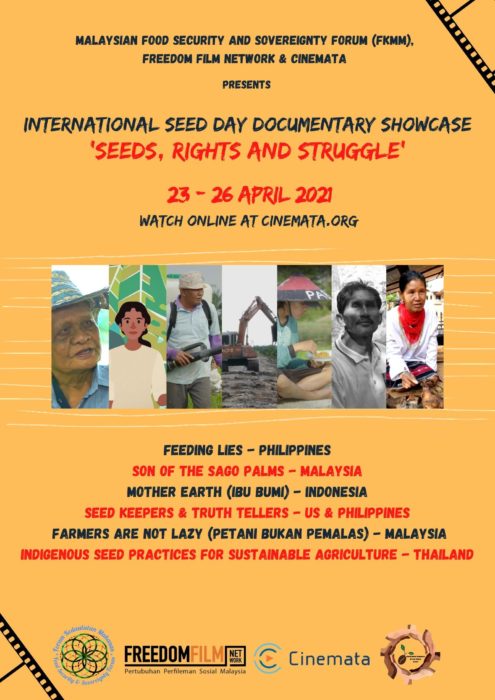 Together with Freedom Film Network and the Malaysian Food Security and Sovereignty Forum, EngageMedia has curated on the Cinemata video platform a playlist of six films on seed saving and its connection to the farmers’ struggles in Southeast Asia, in commemoration of International Seed Day on April 26.

The full playlist will be available for viewing from April 23 to 26, 2021. After this date, only select films will remain on Cinemata.

Aside from the playlist, Freedom Film Network will also host a forum on the future of farmer’s rights in Southeast Asia on April 25, 2 PM Malaysia time (UTC+8). Speaking at the panel are Petani Bukasn Pemalas (Farmers Are Not Lazy) director Nurfitri Amir from Malaysia and Feeding Lies director Ilang-Ilang Quijano from the Philippines, with activist and academician Nurul Salmi Abdul Latif serving as moderator. Stay tuned to Freedom Film Network’s Facebook page for the session.

Below are the six films that are included in the playlist.

Azhar, a rural smallholding paddy farmer from Alor Pongsu in Malaysia, rues the bitterness of an exploitative system where farmers like him are shortchanged with expensive commercial seeds that increasingly yield poor harvests despite all their hard work and dedication. Angered by the declining harvests and rising costs, Azhar takes matters into his own hands by cultivating his own rice seeds, an age-old farming practice long forgotten after the government’s marketing of commercial seeds.

The film is directed by Nurfitri Amir and produced by Freedom Film Network.

Feeding Lies is a documentary on how the International Rice Research Institution (IRRI) gave rise to corporate control of the world’s most staple food. Based on testimonies from former IRRI workers, scientists, and peasant leaders, the film explores the “lies” created by IRRI to promote input-dependent rice farming and genetically engineered rice.

Feeding Lies is directed by Ilang-Ilang Quijano and King Catoy, who filmed the documentary prior to joining EngageMedia.

Seed Keepers and Truth Tellers, US and Philippines

In the Philippines and Bangladesh, genetically modified (GM or GMO) rice is about to be commercialised, threatening food sovereignty, human health, and biodiversity. This animated short shines a bright light on how fragile and unjust so many of our interconnected global systems are. Focusing on GMO seeds, this is the story of their global impacts.

Seed Keepers and Truth Tellers is produced by the Pesticide Action Network Asia and the Pacific.

Son of the Sago Palms, Malaysia

Through the eyes of Sumen, an indigenous community strives to preserve their land and way of life in the rich rainforests of Sarawak. His will to stop a palm oil plantation is as strong as the currents of the mighty river Rajang.

Son of the Sago Palms is directed by King Catoy and produced by the Pesticide Action Network Asia and the Pacific.

Bagus, a 20-year-old farmer from the fertile area of the Kendeng Mountains in Central Java, is anxious about the environmental damage he sees in his hometown. Together with his punk band Kendeng Squad, Bagus gave a voice to his anxiety through Berani Bertani, a video recording of the sounds of nature juxtaposed with the ongoing destruction. Bagus hopes that his music can be an inspiration for the younger generation to keep protecting nature from environmental destruction.

Seeds – the beginning and the end of the food growing cycle. Generations of people using generations of seeds. Survival and culture intertwined. This video gives the viewer insight as to the role and importance of seeds for indigenous peoples and the part that their knowledge may play in the years to come as the world faces the inevitable changes of climate change.

The 2018 film is produced by the Asia Indigenous Peoples Pact.