After years of repression, censorship, and injustice under a pro-military government, thousands of protesters in Thailand are taking to the streets and to the internet to call for political changes and democratic reforms. What started as pro-democracy rallies by students in February 2020 have now evolved to countless protests led by Thai youth and students as young as 14 years old against the pro-military government taking place almost daily in at least 55 out of 77 provinces nationwide.

This student-led pro-democracy movement is the first time in modern Thai history that the Thai monarchy had been talked about publicly in a critical way, since doing so is a jailable offense. The protests, led by the Free People Movement, are demanding changes in a country with a long history of suppressing dissent. Under the overarching goal to have “a democratic form of government with the monarch under the constitution”, the movement is demanding three key changes to the current Thai government:

But much like recent attacks on freedom of expression online in neighbouring Philippines and Hong Kong, Thai protesters and media are increasingly being silenced by their government in both physical and digital spaces.

Just this August 26, Free People Movement leaders Tattep “Ford” Ruangprapaikitseree and Panumas “James” Singprom were arrested for their role in the July 18 anti-government rally. (They have since been granted bail.) A day earlier, Facebook has blocked access within Thailand to the “Royalist Marketplace”, a group with over a million members where Thai citizens can discuss the monarchy, after pressure from the Thai government. Almost immediately, however, Facebook said it was now preparing to legally challenge the Thai government’s request. As of writing, a new group with the exact same name has already emerged, with over 500,000 members joining within the first day of its creation.

On top of these crackdowns, the local Thai media also cannot freely report on the state’s harassment and intimidation against protesters out of fear of being targeted by the government’s legal measures and financial backlash.

Prachatai interviews Tattep “Ford” Ruangprapaikitseree, Secretary-General of Free Youth, one of the organisations leading the protests for democratic reforms in Thailand. Watch the interview here.

‘Down with dictatorship, long live democracy’: What is the issue at hand?

In late February 2020, the first wave of student protests across Thailand were initially triggered by the Constitutional Court’s dissolution of the pro-democracy Future Forward Party, an opposition party popular among younger voters. Soon after, the Thai government signed an emergency decree prohibiting anti-government rallies in the name of curbing the spread of COVID-19. But by June, Thais had grown even more angry at the government due to the increasing economic hardship brought on by the pandemic,  the disappearance of a Thai anti-government activist Wanchalearm Satsaksit in Cambodia, and the perceived failings of the justice system in the case of Vorayuth Yoovidhya.

The movement is demanding
to dissolve the Parliament, rewrite the military-backed constitution, and stop intimidating and arbitrarily arresting critics.

This combination of grievances, along with the easing of lockdowns in the country, sparked the second wave of protests. On July 18, the Free Youth group and the Student Union of Thailand organised a peaceful rally in front of Bangkok’s Democracy Monument with over 2,000 protesters. This time, the student-led demonstrations were far more powerful and widespread, attracting a much broader cross-section of society. By August 16, more than 20,000 people repeatedly chanted, “Down with dictatorship, long live democracy”, at Bangkok’s Democracy Monument.

This new generation of Thais are also harnessing technology to organise “flash” protests, bridging the gap between online and offline activism. Partly inspired by the Hong Kong movement, the movement is largely leaderless, with participants primarily using social media to protest and mobilise more people throughout the nation. Anti-government sentiments and political discontent have spread quickly on social media, with various protest hashtags emerging on Twitter. Young protesters are also using various online platforms like Tinder and TikTok to spread their protest message, often using symbols, satire, and popular culture.

But while the Thai government has maintained that people are allowed to express their dissent and desire for reform, it has increasingly harassed, detained, and initiated criminal complaints against student leaders and protesters who took part in the peaceful protests. While the government said the emergency decree’s extension to September won’t prohibit political protests, the police continue to summon protest leaders for violating the decree. This means the protesters can still be arrested for attending demonstrations, along with sedition and other repressive laws under the Thai Penal Code.

Online, the shutdown of the Royalist Marketplace group on Facebook is a clear reflection of the dangers of expressing dissent against the Thai government and monarchy on the internet. The hashtag #NoTwitterThailand recently topped country’s trending page as Thais grow increasingly critical of the government’s online surveillance and curtailment of freedom of expression. Local media has also opened up about systematic censorship when it came to any coverage critical of the Thai monarchy.

Between August 17 and 19, Thai Lawyers for Human Rights (TLHR) documented 103 cases where students have been harassed or prevented from speaking their minds, including making the three-fingered salute, wearing white ribbons, or holding pieces of blank paper.

At least thirteen activists, including human rights lawyer Anon Nampa and two rappers, were arrested with the sedition charge, and they each could face prison sentences of up to seven years if convicted.

At the time of writing, all were later released on bail. However, some activists have been tailed by security officers in plain clothes, and they believe that there is a list of 31 people that the police seek to arrest for speaking onstage. Because many of the protesters are students, there is increasing concern about the potential targeting of schoolchildren and young people amid the ongoing protests.

When Education Minister Nataphol Teepsuwan tried to get on the stage to speak, @BadStudent chanted at him:

Ensure freedom of speech and assembly in Thailand: Who have spoken up?

The following Thai civil society and international organizations have released public statements to support the activists and call for the protection of people’s rights to freedom of expression and peaceful assembly:

Thai youth demonstrations are also drawing moral support and solidarity from the Milk Tea Alliance, which was most recently active against China’s impediment of freedom of online expression. Both Hong Kong and Taiwanese pro-democracy activists have voiced support for Thai youth protests, giving weight to the international community of cross-border youth movements uniting like-minded activists in Asia.

On August 15, prominent Hong Kong student activist Joshua Wong tweeted to express his solidarity with the Thai student protestors: “As the situation in Thailand turns critical, I hope all freedom-loving people can stand with Thailand”. After that tweet, Hong Kong netizens have continued to support Thai fellows by using the #MilkTeaAlliance and #RespectThaiDemocracy hashtags. 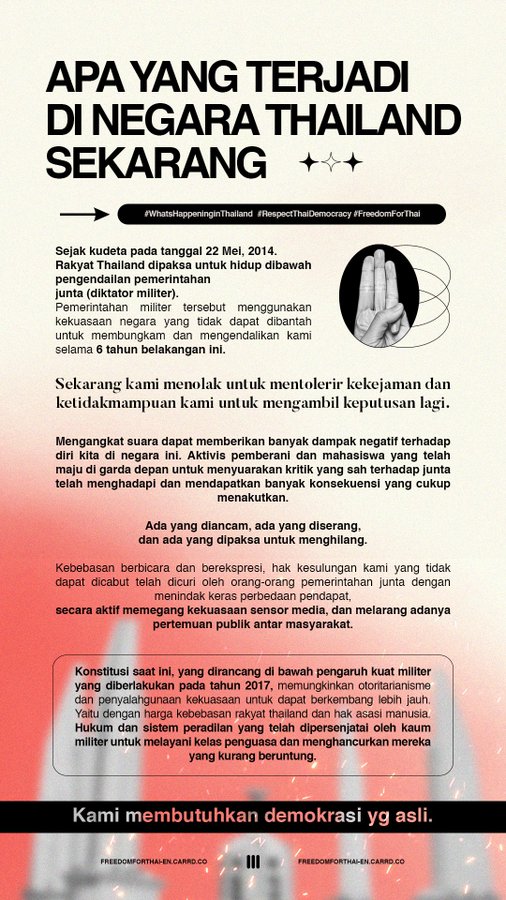 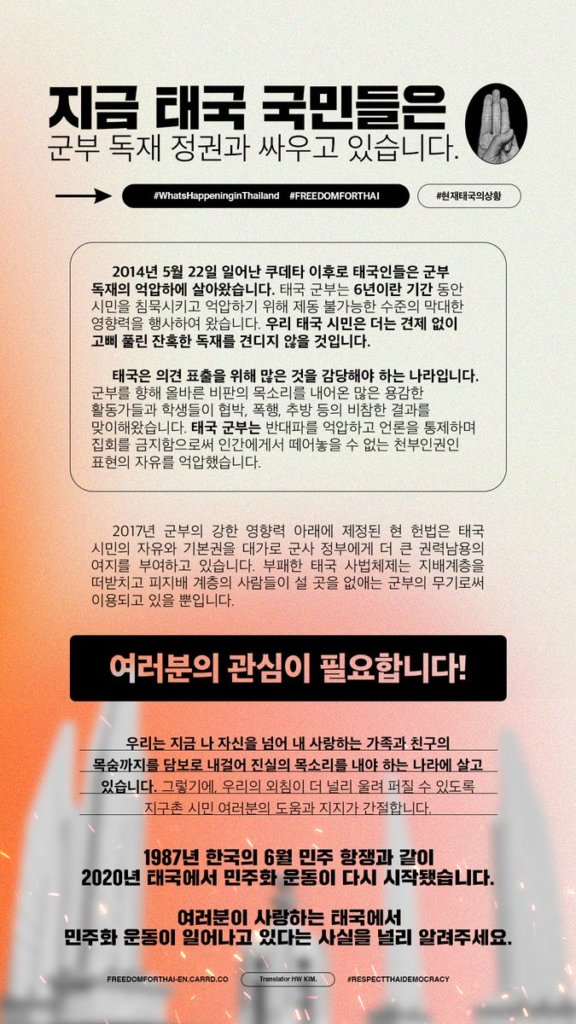 On the Freedom of Thai website, volunteers have translated situation briefers on the Thai protesters in multiple languages such as Indonesian (left) and Korean (right).

What can we do to express solidarity with Thai protesters?

As demonstrations continue, we outside Thailand should follow the recent developments. But the student-led pro-democracy movement also needs our international support amid growing concern about human rights violations and threats against freedom of expression against protesters. Here are ways we can express solidarity with the Thai protesters and local media who continue to be arrested and silenced:

The student-led pro-democracy movement also needs our international support amid growing concern about human rights violations and threats against freedom of expression against protesters.

Despite the arrests and charges against activists, the Free Youth Movement and other student groups say they will continue fighting until their demands are met. Apart from the main demands, there are various civic groups who have also brought their social issues to the protests, including education reform, gender equality and LGBT rights, and the self-determination of the Deep South.

The next major protest is planned to occur on September 19, the anniversary of the 2006 coup d’état. The situation in Thailand continues to change daily. This article will be updated as more information becomes available, but until then, we can show our support for the student-led pro-democracy movement by understanding the context and participating in campaigns of solidarity with protesters.