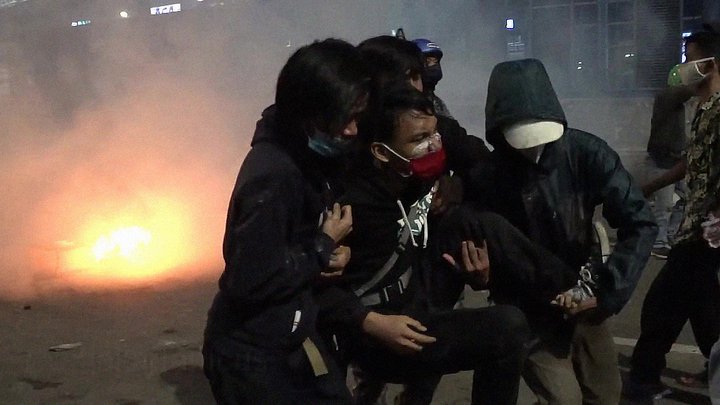 Editor’s Note: This article has since been updated to emphasise the digital rights violations during the protests against the Omnibus Law in Indonesia, and to add more statements from civil society organisations.

Prior to the early October 2020 protests in Indonesia against the controversial Job Creation Law or Omnibus Law, there have already been many other movements against the Omnibus Cipta Lapangan Kerja law—which Indonesian activists have abbreviated as Cilaka (meaning “disastrous” or “accursed”)—since the beginning of 2020.

Indonesian police have launched a “cyber patrol” to monitor protests and dissent against the law online. Previously, the Indonesian government in September paid 22 celebrities and social media influencers to promote the bill using hashtags #IndonesiaButuhKerja, which translates to #IndonesiaNeedsJobs. While the government has refused to admit the exact amount spent on these online campaigns, Indonesia Corruption Watch found that the government is spending “trillions of Rupiah for digital activities and billions of Rupiah for influencers”.

Indeed, the use of cyber troops and fake account factories to influence politics have been common in Indonesia in the past few years. Closer network analysis, however, found that despite the significant spending and paid troops, there were far more voices on social media expressing discontent against the law.

Online attacks against activists and people expressing dissent against the law—and any other issues critical to the government—have also escalated, usually through WhatsApp and social media such as Twitter and Instagram account takeovers. A famous example is the case of Ravio Patra, whose WhatApp was hacked and later used to frame and arrest him due to broadcasted messages calling for “nationwide riots” on April 30, the day when workers were scheduled to rally against the draft bill.

More recently, after pointing out how 12 clauses within the draft of the Omnibus Law are disadvantageous to workers, the owner of Twitter account @videlyae, who is from Makassar City, was arrested by the police on the basis that these clauses were not based on the latest draft of the law.

However, contents similar to her tweets had been in wide circulation for days, even months, before she posted her thread. The arrest of people expressing criticism on WhatsApp, Facebook, and other social media accounts against the Omnibus Law continued, creating chilling effects.

Between October 6 and 8, 2020, protests broke out across more than 18 provinces in Indonesia against the Parliament’s passing of the Omnibus Law that effectively amends more than 70 laws in one fell swoop but will cripple labour rights and environmental protection movements. Purportedly made with the objective of simplifying regulations, independent analysis by legal scholars from Gadjah Mada University found that the law, which logs at about 1,000 pages, would actually require about 500 derivative regulations to be implemented, thus contradicting its original objective to simplify the laws it had sought to amend.

Additionally, the final text of the law was not even available to the public when the law was passed, with multiple different drafts being uploaded and shared without clarity as to which was the latest version. It was later found out that on the day the law was passed, the Parliament signed not the bill but an empty sheet of paper, a violation of the parliamentary standing orders in law creation.

Labour unions, workers, activists, students, and even six governors have asked Indonesian President Joko Widodo to revoke or reconsider the law. But the President on Saturday dismissed any criticism of the Omnibus Law and labelled these as hoaxes. Indonesian authorities are also echoing the sentiment; protesters have been labelled as violent “anarchists” who are being provoked and manipulated by disinformation and social media hoaxes. This is a common, go-to method of turning public opinion to suggest that protesters are dupes and “anarko“, depriving people of agency and denying the legitimacy of their grievances.

As of October 9, 3,682 persons have been arrested, with many denied access to legal logistical assistance by the police, and hundreds of reported cases of alleged assault. These physical arrests accompany other tactics by the Indonesian government and authorities to curb freedom of expression online, such as arrests of WhatsApp and social media account holders, online harassment, account takeovers, and more.

A mass Indonesia-wide protest organised by labour alliance GEBRAK (Gerakan Buruh Bersama Rakyat, or The United Movement of Workers and the People) is scheduled from October 20 to 22.

Who have spoken up?

Here are some statements from various local and international organisations condemning the law:

What can we do about it?

Dissent against the Omnibus Law continues—and so does the Indonesian government’s attempts to quell any form of protest, whether offline or online. And while this issue has many facets beyond digital rights, supporters of freedom of expression online should nonetheless stay vigilant of these attempts to silence critics and protesters.

This issue is a developing story, and we will update with more relevant resources, statements, and calls to action as needed.