The Making Of A Palm Oil Fiefdom

The series, a collaboration between Mongabay and The Gecko Project, is the product of nine months’ reporting across Indonesia, interviewing fixers, middlemen, lawyers and companies involved in land deals, and those most affected by them.

We are featuring four interviews from the story “The making of a palm oil fiefdom”. Beginning in 1999, Indonesia embarked on an ambitious programme of decentralisation, transferring a wide range of powers from Jakarta to local bureaucracies in the hope of both heading off separatist urges and making government more accountable. District heads, the bupatis, were granted the authority to enact their own regulations, provided they did not conflict with existing laws. They exercised this authority liberally.

Between December 2004 and May 2005, Darwan gave 16 of the companies permits for plantations. By the end of 2005, at least nine of them had been sold on to major palm oil firms for hundreds of thousands of dollars. It seems implausible that a series of interconnected people, in many cases family members, would concurrently form companies only to decide that they lacked the capacity to run them. The sole explanation is that they were set up to be sold, endowed with assets from Darwan. 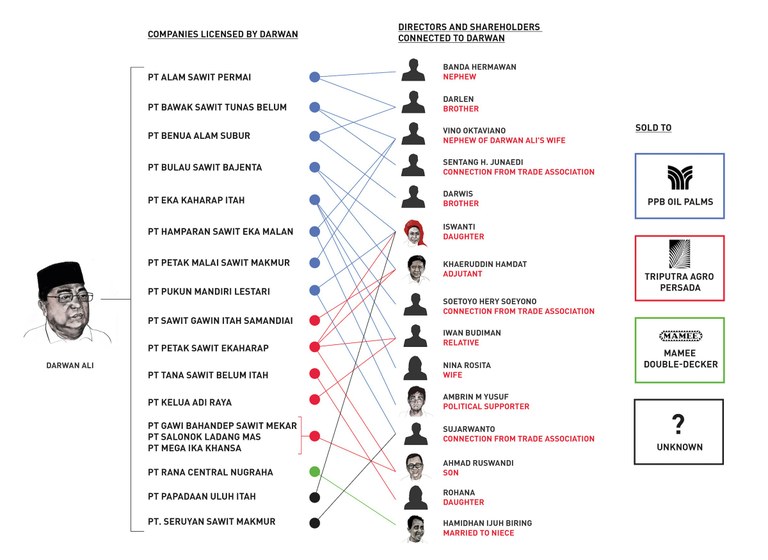 In 2006, Indonesia experienced one of the worst Forest burning seasons in memory, as smoke from fires across Sumatra and Kalimantan set off a carbon bomb and blanketed the region in haze visible from space. Deforestation and changes in land use — a euphemism for the advance of plantations — accounted for some 85 percent of Indonesia’s emissions.

In a 2007 documentary on the impact of palm oil in Seruyan, it was shown that how it adversely affected the local orang-utan population and their habitat making them almost extinct.

Here are interviews of some of the people who resisted this massive exploitation and corruption by Darwan Ali’s Family.

James Watt, a stoic farmer from the lakeside village of Bangkal, had bought into Darwan’s pledge to make the plantations work for the people before his land was taken by the Sinar Mas Group, an Indonesian conglomerate founded by the billionaire Widjaja family. “All we got was oppression,” James told us. “Clearing our land, dumping waste in our rivers. We never imagined it would be like this.” As the companies pushed forth, Darwan didn’t lift a finger. “It was always empty promises with him. I think he saw being bupati as his chance to make as much money as possible.”

Watch the interview of James Watt:

At the beginning of Darwan’s second term, a heavyset, outspoken man named Budiardi was elected to the district legislature with, as he described it, “a mandate to struggle for the people’s rights against the company.” Budiardi came from Hanau subdistrict, where the BEST Group had set up in the national park and in the villages around it. Yet he soon came to the view that it was futile to try to change the system from within. Darwan’s party dominated the parliament; the speaker was his nephew. “It was useless to oppose Darwan’s policies,” Budiardi told us. “The bupati controlled the parliament.”