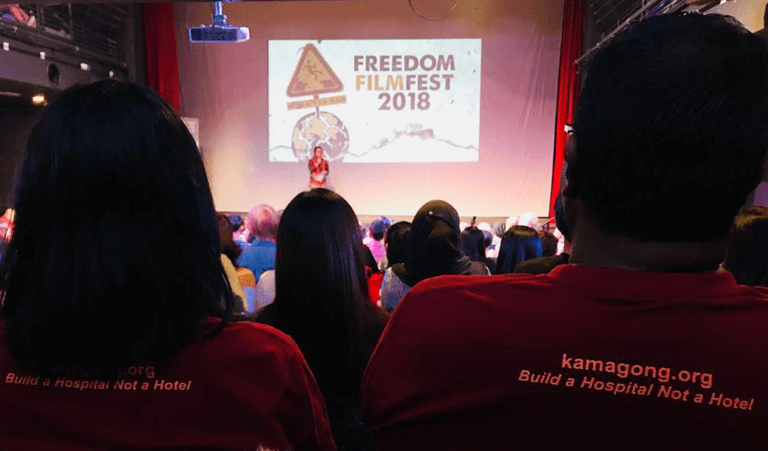 In today’s era of accessible streaming of films and videos at home and the decreasing domestic movie theatre audience, one may wonder if film festivals have become obsolete.

If you were able to attend any session during the recently concluded Freedom Film Festival in Petaling Jaya, Malaysia, and were exposed to the harsh realities and struggles of people from other cultures, it is hoped that you think otherwise–that film festivals continue to act as an eye-opening bridge among cultures in this increasingly polarised world.

For 16 years, the Freedom Film Festival has remained as the only independent human rights film festival in Malaysia. It has been a platform in showcasing issues and ideas that cannot be mass-communicated due to local laws and cultural taboos.

In a recent interview with EngageMedia, Anna Har and Brenda Danker of the Freedom Film Network explained the objective of this year’s festival through its theme “Mend the Gap”. According to Har and Danker, the festival did not only show films but also engaged the audience during screening discussions. These discussions encouraged dialogue among the audience, filmmakers and the families of the subjects of the film. As a result, members of the audience were emotionally motivated to campaign and work towards a solution. This sharing of energy and emotions acted as a catharsis for people who, being compartmentalised in their own society bubbles, are usually not aware of or have a different view of the problems of the sufferings of the marginalised people around them. 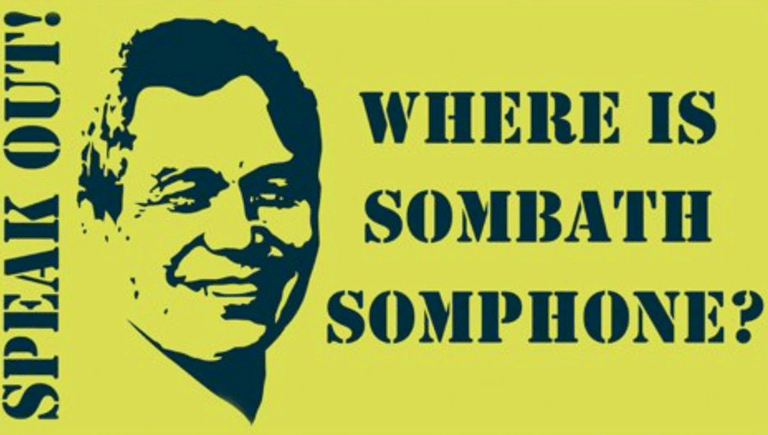 On 29 September 2018, the opening day of the festival, a film from the Lao Democratic Republic, “the Enforced Disappearance of Sombath Somphone”, a documentary dedicated to victims of state-enforced disappearances worldwide, was screened. It narrates the life and work of Sombath, a development worker from Lao Civil Society, who promoted sustainable development in poor rural communities in Lao after returning from the US completing his studies. He went on to receive the 2005 Magsaysay Award for Community Development.

The documentary highlights the tragedy of Sombath’s disappearance on 15 December 2012, and its chilling aftermath. His wife Shui Meng Ng obtained CCTV footage that vividly shows the Sombath’s abduction from a police station in downtown Vientiane but the government subsequently denied any involvement after international pressure. People are still asking, “What happened to Sombath Somphone?” 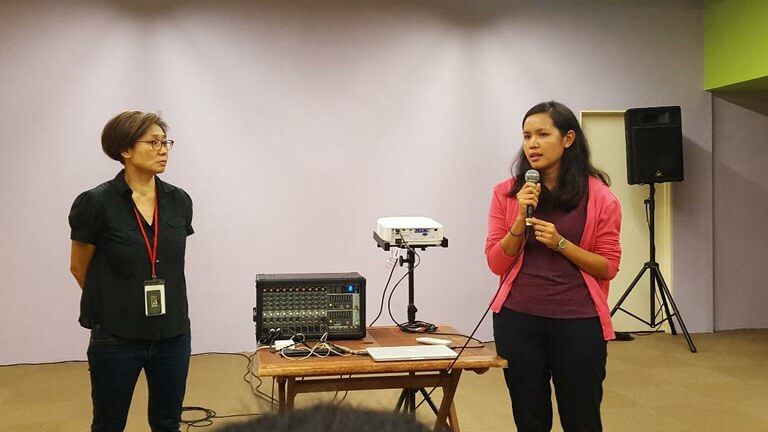 After the screening, Sombath’s niece came from Laos and went on stage to contextualise the film and engage with the public. Also present in the discussion were Thomas Fann of Engage, a citizen action group based in Johor, Malaysia, and Susanna Liew, the wife of Malaysian Pastor Raymond Koh who was mysteriously abducted in February 2017. To many members of the audience, it was surprising to learn that Malaysia also has a history of enforced disappearances. In fact, it was known that at least four people, social activist Amri Che Mat, Pastor Raymond Koh, and Pastor Joshua Hilmi and his wife Ruth, have disappeared under mysterious circumstances in the past few years. 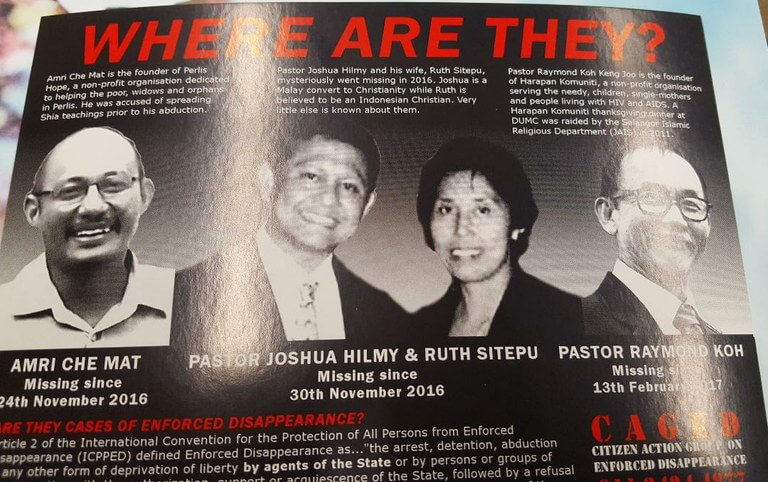 Enforced disappearance is a crime against humanity. Worse, the victims’ families and their communities are faced with distress and anguish not knowing when and if their loved ones will return.

Another notable mention is the film “Menunggu Masa” (Waiting For Time) which was directed by S-Ploited. It was screened on 6 October 2018, the last day of the festival. The film highlights the highly controversial topic of the abolition of the death penalty in Malaysia. Malaysia’s criminal law provides for death by hanging in several types of offences including murder, drug trafficking, treason, and waging war against the King.

A 2012 public opinion survey by the Death Penalty Project (DPP), in association with the Malaysian Bar Council, found that “Malaysians believed in the death penalty but were not willing to meet it out”. To add, there is apprehension about mistrial and injustice because of perceived corruption in different sections of the police and the judiciary. 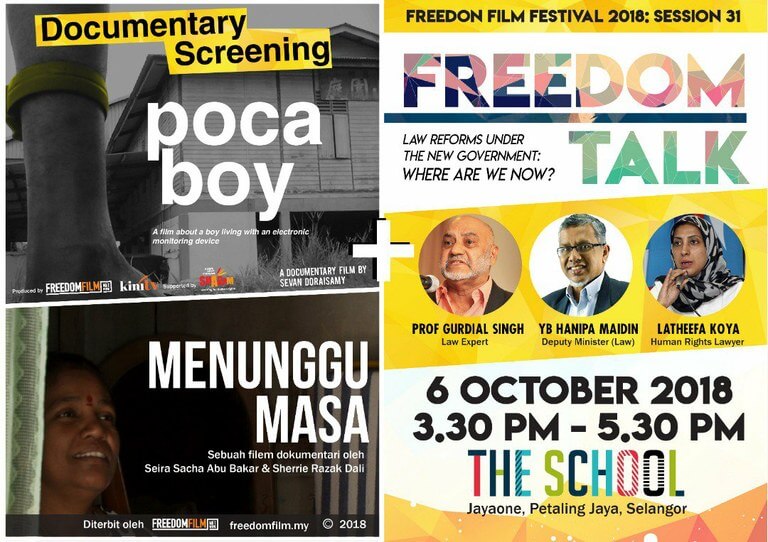 Menunggu Masa (Waiting For Time) talks about a Tamil Malaysian named Mainthan, who has spent the last 14 years on death row, along with three other suspects, after being convicted of a murder he claims he did not commit. The film revolves around his family, sons and daughters showing their struggles to make ends meet and how they found hope in different stages of the judicial trial. There were various questions raised in Mainthan’s case:

“One is who is this victim? The identity of the victim was raised at the first review application made by Mainthan and it was dismissed. Subsequently, a person who claimed that he was the only victim turned up in late 2016, but the new evidence was also dismissed by the courts. A total of 19 different judges have heard Mainthan’s case since 2004.”

But Mainthan remains behind bars and awaits the death penalty along with 1,266 other prisoners waiting to be executed any day. More worrisome, Malaysia, according to Amnesty International, has a reputation for meting out death sentences in secrecy.

After the screening, the family of Mainthan was present for questions, which later became an emotional moment for the audience. Some Malaysians in the audience admitted that the case was unheard of. At the same time, they were faced with the realisation of the repercussions of the death penalty– there is a possibility that an innocent person may face the gallows due to loopholes in the trial. With this, the audience agreed to highlight and advocate the abolition of the death penalty in Malaysia and committed to helping the family in this troubling time.

Coincidentally, within days of the screening, on October 10, 2018, the Malaysian cabinet announced that it would be tabling a bill to abolish the death penalty in Malaysia. In addition, the Government has imposed a moratorium on all pending executions until the death penalty is abolished. 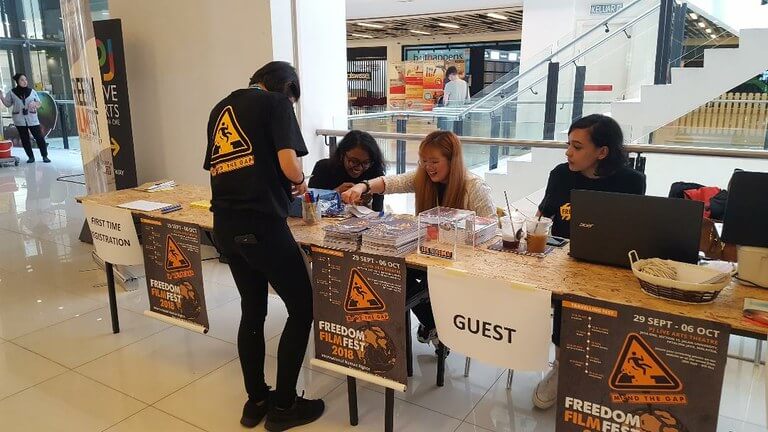 This change shows that film festivals do not only serve as a platform to screen films to a wider audience but can be a starting point to influence an impact. These help in highlighting and distributing filmmakers’ work and inform and engage with the audience about issues on a larger scale. This is why the world needs more festivals such as the Freedom Film Festival: to inform and inspire a wider audience, cultivate an interest in independent films, and become a place of discovery for struggles that our neighbours face which we often fail to see.