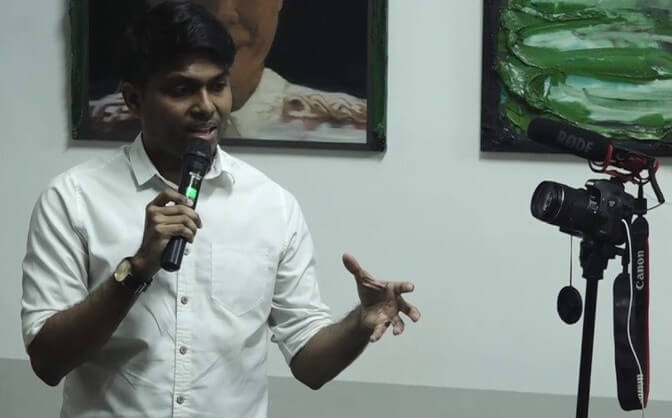 Artist and activist Seelan Palay was convicted by a Singapore court for taking part in a public performance.

Last year, on October 1, Seelan Palay was arrested outside the Parliament House in Singapore for displaying his performance art piece “32 Years: The Interrogation Of A Mirror”. The authorities deemed the performance was in tribute to former long-time political detainee Chia Thye Poh in commemorating his first arrest in 1966 for allegedly conducting pro-communist activities against the Singapore government. However, Seelan maintains that “32 years” refers to his age at the time and it was merely a peaceful, harmless performance.

Seelan’s application seeking permission for the performance was approved by the National Parks Board (NParks) of Singapore but they restricted the permission to the Speakers’ Corner in Hong Lim Park. The court convicted him for the offence of continuing his performance beyond Hong Lim Park at the National Gallery and Parliament House. On October 3, 2018, he was sentenced to pay a fine of $2500 or in default to serve a jail term of 2 weeks. He chose not to pay the fine. He is now serving his two weeks in jail.

According to Teo Soh Lung at The Online Citizen:

Freemuse, an independent international organisation advocating for and defending the freedom of artistic expression wrote in an open letter to Ms. Grace Fu, Minister for Culture, Community and Youth of Singapore, and mentioned:

“The Constitution of Singapore states that “every citizen of Singapore has the right to freedom of speech and expression” and that “all citizens of Singapore have the right to assemble peaceably and without arms”. However, a concerning trend has emerged where Singaporean authorities are criminalising protests of all magnitudes and punishing dissenting opinions that are expressed through art, such as those expressed by Mr. Palay.”

Amnesty International has issued a statement saying that the conviction of activist for art performance is an attack on free speech.