Videographers Tell Stories of Struggle of the Indigenous Communities in Mindanao 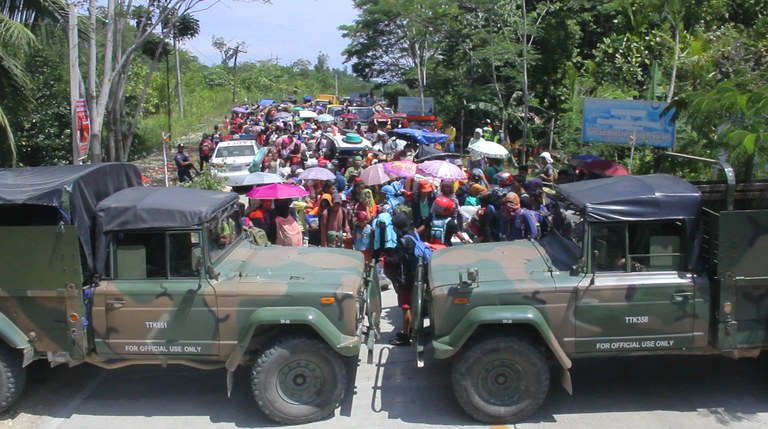 Were it not for alternative video groups, few people would know how martial law truly impacts many communities in Mindanao island in the Southern Philippines. After all, in Davao City, all seems to be “business as usual,” with the local government and businesses in the thick of preparations for the annual Kadayawan fruit festival. But beyond the big cities lie the real stories—stories in the midst of war and poverty, which take a certain amount of courage and commitment to telling.

I had a chance to meet with two Davao-based video groups which cover underreported regions Mindanao. Kilab Multimedia, whose name means “spark,” was established in 2011. Meanwhile, The Breakaway Media was formed around two years ago, and its name means to “break away” from mainstream media. Both groups are part of AlterMidya, a national network of alternative media groups throughout the Philippines.

One of The Breakaway Media’s latest works, Pasak Nu Tagama (A struggle for the next generation), is about the flight of evacuees from their homes in Lianga, Surigao del Sur due province in Mindanao to intense militarization. Hundreds of families of the Manobo, an indigenous tribe, were forced to trek for kilometres in rain and mud in order to escape soldiers whom they claim were harassing them and accusing them of being rebels. Their fear is well-founded. In 2015, a school principal and two tribal leaders were murdered in front of the entire community by paramilitary forces who they say were deployed by the military. The Manobo’s ancestral land in Surigao del Sur province is the target for expansion by mining companies, hence, the militarization of the area.

Jaja Necosia, videographer of The Breakaway Media, told me how he and his team were blocked by soldiers from reaching the evacuees, who were literally already a few meters away from them. They had to find an alternate route inside the community in order to reach the village gym where the evacuees were staying. Once inside, they had to endure the same hardships of the evacuees—they had almost nothing to eat and drink, as a food blockade was being enforced, and living conditions were unsanitary. Despite this, The Breakaway Media stayed for days and thus were able to bring to the wider public a story that otherwise would not have been told.

Aside from stories of the Lumad (a collective term for various indigenous tribes in Mindanao), The Breakaway Media also documents the plight of farmers and agricultural workers in various provinces in Mindanao. In The Promised Land, the failure of the government’s agrarian reform program to provide land to the tillers is evident. Many so-called agrarian reform beneficiaries have been waiting for land to be distributed for decades, yet it remains in the control of big plantation owners.

Meanwhile, Kilab Multimedia has been trying on a fresh perspective through a humorous web series entitled “Agaw Wen.” It features Wen, a comedic presenter who speaks in Bisaya, the local language in most of Mindanao. He goes around interviewing ordinary people about what they think about certain social issues. Wen acts, exaggerates, and comes up with a lot of funny quips, but nonetheless can shift to a serious explanation of issues such as the need for a national minimum wage increase. Kilab Multimedia aims to reach a local audience through “Agaw Wen,” which they’ve been told is already a hit in community screenings. Certain episodes of the web series are co-produced with people’s organizations such as trade unions and farmers associations. I guess activist organizations are in need of videos that not just arouse the consciousness of their constituents, but also tickle the Filipino funny bone.

Kilab Multimedia has long been known for its human rights reportage that focuses on Mindanao, where unrest and conflict are widespread. It captured video footage of the 2016 shooting of a farmers’ protest in Kidapawan to demand food aid, during the height of the drought in the province of North Cotabato. These dramatic footages of police forces shooting at farmers—were used in legislative hearings and court proceedings against officials involved in the untimely death of two farmers.

The group has since been venturing into other areas such as film production. It is a co-producer of the award-winning full-length feature Tu Pug Imatuy (The Right to Kill). Tu Pug Imatuy is a film about how far the Lumad can go in their struggle for land and against oppression. Using indigenous peoples in the community as non-professional actors and shot with a bare-bones budget, the film is an inspiring example of independent filmmaking with advocacy. It has won top awards by the country’s most prestigious award-giving bodies (Best Film at SINAG Maynila Film Festival; Best Director at Gawad Urian and FAMAS Awards) and has just completed its cinema run at the Pista ng Pelikulang Pilipino (Festival of Filipino Films).

The Breakaway Media and Kilab Multimedia are both doing important work in producing video for change from and about the people of Mindanao, who are in very much in need of representation, not just nationally but internationally as well.
This work is licensed under a Creative Commons Attribution-NonCommercial-NoDerivatives 4.0 International License.