On the 3rd of April I arrived in Mumbai to participate in the Good Pitch India 2018 summit. This is my first time here. 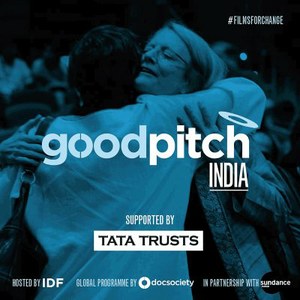 Aside from providing support to the most important docs that we have seen the past years, Doc Society designed the Impact Field Guide and Toolkit. This field guide shows new and old documentary filmmakers alike how the power of their artistic craft in documenting social and environmental issues can catalyze change.

Good Pitch is a unique event for documentary filmmakers. Usually, there are film festivals that showcase the finished works of filmmakers; grant bodies contacted by the filmmaker that may or may not provide funding.

Good Pitch is something more than this. It is an initiative that highlights social responsibility. The filmmaker is encouraged to produce a film based on realities faced by an individual or community and then the donor or supporter is brought to the arena by Good Pitch to provide possible support.

In India, the main partner for the event is the Indian Documentary Foundation, which did an excellent job of gathering funders, NGOs, distributors, ad agencies and other individuals from all backgrounds who may give financial and other kinds of support to the films.

Out of the 150 entries received by Good Pitch India 2018 last August, four films were selected to be part of the pitch. A series of workshops were facilitated by Doc Society to help the filmmakers develop the story of their film. In my conversations with the filmmakers, much attention has been given by Doc Society to ensure guidance with regards to the impact of their films.

A Marathi speaking middle-class family, the Patils live in Mumbai, India. Suresh (53) is a lawyer. Archana (45) is a homemaker. Rashmi is their 20-year-old happy-go-lucky daughter.

Although hearing and speech impaired, she is a classical dancer and designs jewellery. In the centre of the Patil family is Jatin (18). He is a person with autism.

“Her Song” tells the story of three women from one of the lowest castes in India: the Banchara. Because of the intense prejudice this caste experiences, the men cannot find work. So for generations, the women and girls have prostituted themselves, often starting as young as 10 years old.

Every other home has a girl child missing in the village. A well-known photographer journeys into the Sunderbans. Helped by two village girls they uncover a trail of intriguing clues to reveal the subcontinent’s darkest secret.

In one of the most socially oppressive and patriarchal states of India, emerges Khabar Lahariya. Meera, its popular reporter, leads the move to magnify the newspaper’s impact

with an audacious decision – to transform it from a print to a digital news agency. Working in media dark villages, mocked and discouraged, this is the story of a unique journalistic

movement in building what will be the world’s first digital news agency run entirely by rural women.

Each filmmaker was given seven minutes to pitch the film to an audience composed of potential funders and supporters. They showed the audience the most compelling images of the film they’re working on. All of the filmmakers came with the protagonists of their films. The most touching moments of the event came from the short inspirational talk given by the films protagonists. After the presentation, a panel composed of foundations, NGOs, advertising and media companies and government agencies most likely to support to the film are given two minutes to react to the filmmakers’ presentation.

Much of the event’s highlights came from the overwhelming support of the people from the audience who spoke on the microphone to either give financial, material and even moral support to the protagonists and filmmakers. Not all the filmmakers were promised financial support, but the support pertaining to film distribution and free post-production services that were offered was overwhelming.

It was quite an experience to be inside an auditorium where art and film patrons who were mostly from cultural and civic organizations give a flow of support to the filmmakers and the protagonists of the films.

EngageMedia expressed willingness to support Khabar Lahariya of the film Writing with Fire through digital security guidance. The rural women journalists use their smartphones a lot in their reportage. EngageMedia can give online tutelage in communicating online securely and access to apps that can help them in evidence gathering and human rights reportage. It was quite an experience for me, too, to talk in an auditorium where I see myself projected in a big screen to an audience of almost 250 people.

The event may have ended but our opportunity to support the films is still very much open. One of the filmmakers needed a couple of 4TB hard drives to expedite the continuity of his project. Good Pitch and other institutions expressed willingness to convene engagements between filmmakers and potential supporters.

To contact the filmmakers and to know more about the project, send a message to the event’s Facebook Page.