Bonny Lanny joined Papuan Voices Wamena in 2014 and since then he has made several captivating documentaries and an album of unique local songs. 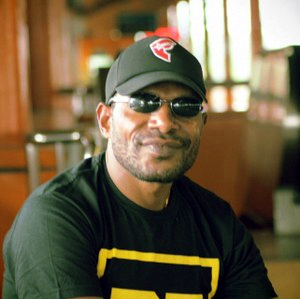 Bonny Lanny joined Papuan Voices Wamena in 2014 and since then he has made several captivating documentaries and an album of unique local songs. Papuan Voices is a video advocacy initiative working with Papuan activists to more effectively tell their stories to the world.

EngageMedia spoke to Bonny to learn how he became a filmmaker and how was his journey:

EngageMedia (EM): Tell us who you are as a filmmaker and how you began your career?

Bonny Lanny (BL): Before joining Papuan Voices, I made videos in my hometown which were mostly recordings of Christian songs, as well as some indigenous songs. My early works in 2011 were more like video clips, and produced my first documentary only when I joined Papuan Voices in 2014.

My first film was about a report for Forum Masyarakat Jayawijaya on the denouncement of the erection of a military building in Wamena – A movement I was also involved in. I also did photo documentation, shot demonstrations, and the activities of my friends, all of which I put together as a video report.

In the beginning, I made films without any training. I just made them spontaneously, acted based on my own plans. I made them by simply putting content together such as text with photographs. After I joined Papuan Voices, I started to understand the steps needed, such as writing a script beforehand and all sorts of other techniques.

EM: Can you tell us about the video production scene there?

BL: Now, we have so many Papuan children studying outside of this island. But there rarely are any who study music or film. They mostly apply for degrees in Law or Economics, but don’t have links to this kind of work. So it’s only us (in Papuan Voices) who maybe understand about the situation here. This is why we try to teach our brothers and sisters, based on what we know from our experiences. That is very important.

EM: What do you think about Indonesian audiences in relation to Papuan issues?

BL: On one occasion, I held a screening in University Negeri Jakarta where I played several videos. And I played one film about Freeport (a mining company). At that time, in Papua, many indigenous people held demonstrations about police brutality towards protesters, some of whom had been shot by the police.

After that event, I began to understand that the people in Jakarta don’t know anything about the situation in Papua. I mean the real situation. They have the idea that Papua is very rich and all that the people in Papua live in luxury, especially seven tribes which receive yearly donations from Freeport. So they think they must be wealthy, have fancy houses and cars, all those sorts of things.

These mindsets emerged because Freeport broadcasts their own information and only present the good side of things, and ignored all the bad things that happened to ordinary people. But yesterday we had a screening in Bali, and then in Yogyakarta, after which people (Indonesian audiences) began to understand that the situation in Papua is not like what they think it is.

National and local media in Papua are privately owned or owned by the government. We call it “red plate” media because it only publishes beautiful images of Papua. They rarely expose the many failing policies of the government. My films are about these failures, all the lesser-known issues, and there are so many. This is so we can expose the failure of their policies in Papua and outsiders can see what’s really happening in Papua.

EM: Do you agree that video has the power to persuade and change people?

BL: I think using film is much more suitable for that nowadays because most of the younger generation who are still studying in University, let alone those who don’t have any high education or drop out, don’t read much. If they’ve dropped out, they won’t read books but they do like watching films. From my analysis, people enjoy watching films about issues and they quickly understand them. Its ability to influence is much more than with reading books. It’s much slower with books.

EM: Finally, what’s your message to young Papuan artists out there?

BM: In Wamena for example, there are not many people who make their own videos or songs as I have. It’s still hard to find this kind of people, so, for now, I think it will need and go step by step. I produced songs, made them into a DVD, and sell my own music. For most people, even if they can write music, they still need people from outside Papua to help them to record and produce their albums. Everything for the music video, shooting and editing must be done outside Papua.

I’ve recently watched films that have been produced by young locals. Even though they are still very rough and elementary, it’s still progress for youth in Papua. If you compare us with elsewhere, we have a delay of access to information and technology. It’s very slow. So to be able to compete with others, we need to go step by step, slowly. If we force it to be quick, it’s only going to make things more difficult.