A. Dananjaya is an Indonesian filmmaker who uses film to highlight alternative perspectives on Indonesia's 1965 Tragedy. 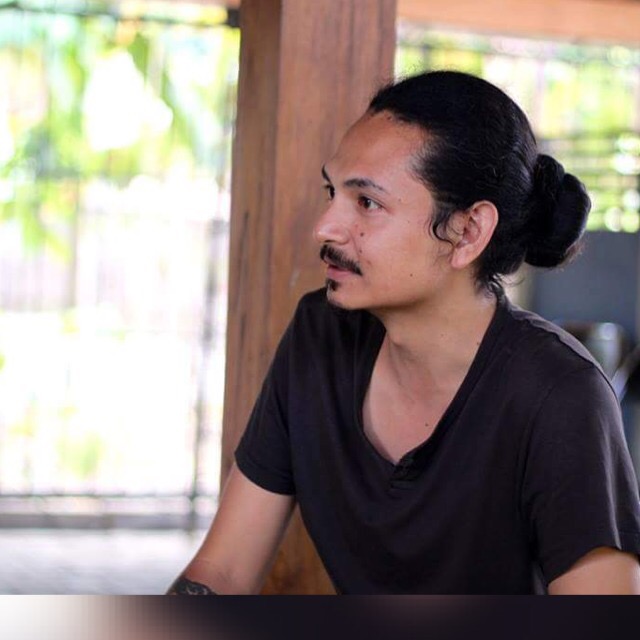 About: Akar Dananjaya is an Indonesian filmmaker who uses film to highlight alternative perspectives on Indonesia‘s 1965 Tragedy. He is also the chairman of Kotakhitam forum, a culture and media organisation, which is committed to focusing on the Indonesian identity with all of its cultural diversity and acts as a learning place of the marginalised communities.

Commemorating the 51st anniversary of Indonesia’s 1965 Tragedy, we interviewed A. Dananjaya, who uses film to highlight alternative perspectives on history.

EngageMedia (EM): Tell us who you are as a filmmaker and how you began your career.

A. Dananjaya (AD): My name is Dananjaya, but people usually call me Andrew. I’ve been working with kotakhitam Forum from when it was founded in 2008. I’ve never studied filmmaking, but I greatly enjoy watching films and I do that often.

Back then, I was thinking about making my own films on particular topics. And since I love history, I decided to start an organisation – a non-profit one – that focuses on film and history. At that time, I believe Kotakhitam Forum was the first organization working on both film and history.

EM: Can you tell us about some of your more notable films? Which would be your favourite?

AD: Till today, we’ve made several long-format documentaries, most of which address the situation in Indonesia in 1965. Our first-ever documentary was about Lekra (Lembaga Kebudayaan Rakyat or People’s Culture Organization), titled, ‘Yang Bertanah Air, Tak Bertanah’. The film features eyewitness accounts of former members of Lekra on their revolutionary movement as a continuation of the unfinished revolution of 1945.

Our second big project, ‘r.i.’ tells the stories of Indonesian political exiles who, for a certain period of time, could not return to the country due to the coup in 1965. This group included students, journalists and cultural delegations who were sent abroad by Soekarno in the 1960s.

Our third film of note is ‘Api Kartini’, which is about survivors revisiting a prison camp in Plantungan, Central Java, where they were isolated because they were assumed to be members of the Indonesian Communist Party (PKI) during the New Order era. They shared stories on suffering in silence, memories of loss and severe trauma in trying to recall that violent period.

I would say that ‘r.i.’ is my favourite film. As our first production, we learned a lot from it, not only with regards to working with such topics but also technically, since none of us came from film school. Back then, it was very rare that people discussed political exiles, who we travelled to Europe to meet directly. It’s also the film that we’ve done the most outreach for.

EM: What is the background to its story?

AD: The film focuses on political exiles from Indonesia who could not return because of the 1965 Tragedy and lived in Europe. The aspiration to build a new Indonesia under the leadership of Soekarno brought about delegations of students, artists and journalists were sent to Europe to absorb new knowledge and experiences.

The 30th September movement, had a big impact on those who were abroad. The New Order regime screened and withdrew the passports of anyone who was considered leftist or communist. Some of these citizens chose not to come back to Indonesia due to the possible consequences, such as arrest and abduction. To survive, they started a restaurant which became a symbol of solidarity among exiles. Restaurant Indonesia in Paris became a part of the emancipation movement by Indonesians who were concerned about human rights issues. It was boycotted by Suharto’s regime, but the inconsiderate labelling of it as a “red” restaurant never deterred its spirit.

AD: Since we’re dealing with rather sensitive issues, myself as producer and director of all the films produced by Kotakhitam Forum will be the first in line to face any challenges. But sometimes those challenges greatly help me to know more deeply about what is going in my country.

I’ve met lots of amazing people that faced the tragedy, survivors, historians, and younger generations that have totally no knowledge about the story of that time. With Kotakhitam Forum, I take the opportunity to be a medium and bridge different communities to understand and learn from each other.

For example, when we meet with youth, most of what they know is history as told by the New Order. It then becomes our job to take them to meet survivors and victims so that they will get a chance to listen to perspectives they’ve never heard before. That also happens with our movies, we use them to be a bridge to discuss propaganda and version barrier between generations.

EM: Are there any challenges for you working in Indonesia, specifically on the 1965 issue?

AD: Many critical groups besides Kotakhitam Forum also produce documentaries and books in order to provide an alternative historical discourse. Since our target audience is history teachers and high school students, these new resources challenge institutions to become more open to interpretations.

However, the public discourse has not always had an impact. Many teachers still use the same books that were used during the New Order regime, because they seem to be haunted by the trauma of the period and the formal curriculum bureaucracy. By screening documentary films with alternative perspectives to history teachers, we hope to encourage more open-mindedness and boldness among them.

EM: What first attracted you to work with documentary film?

AD: It started in 2008, when my friends and I founded the organization and had a discussion on history and politics. One of us said he had just read alternative history books, where the content was totally different compared to what was taught at school. It surprised us a lot, as we’ve never heard those comparisons made before.

Since then, we started researching on it. Some people helped us meet survivors and we thought that we should record it, because there were many others aside from ourselves who did not know about such issues. We decided that film would be the best medium to use, as it has audio and visual aspects which can more fully document the people we’d interview. We also thought that films would be more flexible to distribute via screenings instead of books.

AD: Online distribution helps us a lot with outreach. Especially when working on certain issues in Indonesia, we have to be very careful about our security. Based on that reality, we more online than offline distribution, but online distribution also aids us in reaching broader audiences.

However, we still believe in the unique ability of offline distribution, which creates an important space for face-to-face discussion. That’s why we continue our engagement with high schools by screening films there.

For me, both online and offline distribution are not easy to do. We still encounter a lot of difficulties in promoting our films, especially with the complicated regulations when dealing with formal organizations.

AD: We’re now in the middle of our next project, which is also related to the 1965 Tragedy. There’s a new choir group consisting of family members of survivors, and they just launched their first album. We approached younger generations to interpret their songs through the audio-visual medium.

Another ongoing project is a filmmaking workshop with high school students on family history. We’re also attending to some international students who are doing internships with us.

AD: I do believe 100% that films can change society.

What we’ve been doing for the past few years is to look at to what extent high school history teachers are willing to consider using films with alternative historical narratives in their work. We believe that this activity assists in the development of the history curriculum into a more humane and democratic one. It opens new perspectives on the discourse of the 1965 tragedy to teachers and schools, and encourages students to be more critical in comprehending Indonesian history.