Kha is co-founder and animator at JOOSK Illustration, a team run by talented young digital artists in Myanmar. 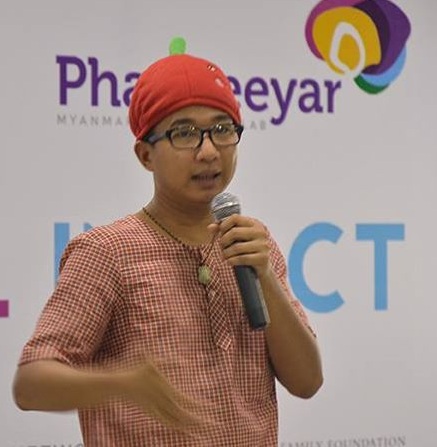 About: Kha is co-founder and animator at JOOSK Illustration, a team run by talented young digital artists in Myanmar. Kha is also part of the creative team at Democratic Voice of Burma's TV channel, and attended Camp Chindwin, our Southeast Asia Video Camp in Yangon earlier this year.

EngageMedia (EM): Tell us who you are as a filmmaker. How did you start your career? 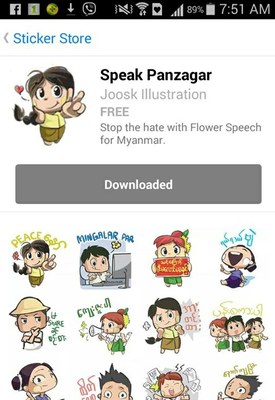 Thet Paing Kha (TPK): I’ve been working on cartoons since childhood and high school, I started working with video by directing a music video for a heavy metal song. My goal was to attend an art university abroad, but I couldn’t afford it and went to a local university instead. While pursuing a course in electrical engineering at the University of Technology at Thanlyin, I continued making designs, cartoons and studied photography and lighting technology. After graduation, I decided to pursue my intended career goal, and I currently work with the creative team at Democratic Voice of Burma TV.

I’m also the co-founder of JOOSK Illustration, which was well-known for creating Facebook stickers in Burmese as part of the ‘Panzagar‘ anti-hate speech campaign by MIDO, a local technology NGO. You can read some media coverage on the campaign here, here, and here.

EM: Why did you choose to work with animation and what first attracted you to it?

TPK: I really love cartoons and animated film. I’ve always drawn out characters after watching films. I realised that I’m very interested in producing animation and I wanted to become a good animator and director. In Myanmar, there’s not a lot of development in the animation field and so I really wanted to contribute to it.

TPK: There are currently no schools in Myanmar for visual effects and animation. The Internet is very slow here, so it’s not easy to study online either. Most parents want their children to become doctors and engineers. Some have a negative perception of our field, and restricted their children from getting into it. It’s a really difficult situation for all of us.

EM: What is your favourite film?

TPK: The film I like best is ‘My Neighbor Totoro’, an animated film from Japan. It tells the story of the two young daughters of a professor and their interactions with a cute wood spirit called Totoro. I always feel inspired after watching it.

TPK: I think online distribution is more effective for filmmakers. Today, social media helps spread our work much further. We are able to know how many people are watching our films and see likes and comments. It makes it much more easier for us to understand the impact of our work. Offline distribution such as producing DVDs and airing on TV channels is good too, but we need to set aside specific time to do it.

EM: What are you currently working on and what is your next project?

TPK: My next goal is to produce an educational cartoon TV series. The background may be historical folk tales from Myanmar, mixing science fiction and ancient themes.

EM: What benefits or differences do you see in using animation compared to film for social change?”

TPK: I think animation is very effective in imparting new knowledge and visions to the people. We don’t even need to mention any of the cartoon characters’ names. People can understand animated film within a minute because the pictures are very clear and descriptive.

Another good aspect of animation is that it can more easily address sensitive issues such anti-hate speech. It will not be simple to run a successful anti-hate speech campaign in Myanmar, but we used quotes with cute characters for the Panzagar campaign and people loved it. Our teams’ goal is peace building and the it was clearly understood by the audience. So I think animation is better for communicating sensitive issues.

Check out our other featured filmmakers from the Asia-Pacific region here.