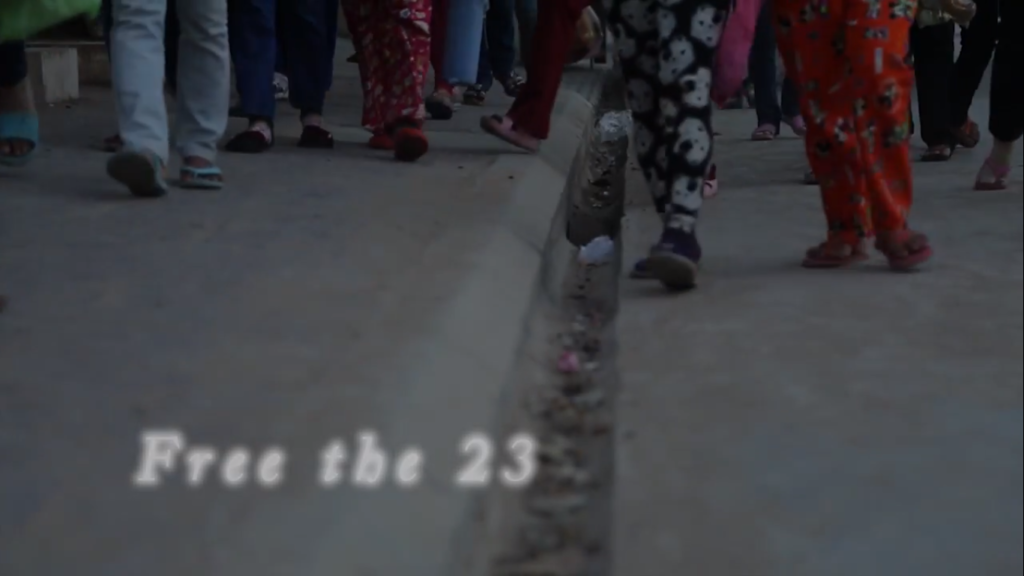 Over the past two years, there has been a growing campaign to highlight the plight of workers in Cambodia’s garment industry, which accounts for more than 80 percent of the country’s exports.

The workers, over 80 percent of whom are women aged 18-35, face a myriad of problems including extremely poor wages and living conditions, and the lack of protection for health and safety. When these workers organise themselves to voice out about these issues, they are often met with threats of arrest, violence, and in some cases, death.

In December 2013, Cambodian garment workers went on a nation-wide strike asking for a higher monthly minimum wage than the $75 they currently earn. This led to a violent crackdown by Government authorities and a complete ban on demonstrations.

‘Free The 23‘, a video recently uploaded to our website, was produced to call for the release of 21 garment workers and three prominent human rights activists who were among those arrested for organising for a minimum wage of $160 per month. The ongoing campaign has seen great global support.

The two-part video, ‘Cambodian Workers Locked in Dispute‘, also tells the story of a wage dispute. It features the story of almost 200 workers who are owned $200,000 in wages and indemnity by a supplier of the global clothing brands Walmart and H&M.

The video was widely distributed and used as part of a global campaign to reach out to the retail giants through letters and demonstrations. Two months later, the workers won a settlement of an estimated $200,000, and another video was produced on their success. The looks of joy on the faces of the workers towards the end of the video is priceless.

Others are not as lucky however. The video ‘Cambodian Workers VS Puma‘ tells the story of three female workers who were shot during a protest outside a Puma supplier’s factory. This video was also used as part of an online petition campaign. Despite their pain, the women have all returned to work while their shooter, a former mayor, had his charges dropped and remains free.

Another film that should be mentioned is ‘Who Killed Chea Vichea?‘, a banned documentary which investigates the murder of labour leader Chea Vichea and a supposed government plot that framed two men. As this year marks the 10th anniversary of the assassination, an attempt was made to screen the film publicly in Cambodia. But authorities announced on the day of the screening that any foreigners involved would be deported and Cambodians arrested. The event was then cancelled.

Through our partnerships with organisations such as VOD and LICADHO, we continue to source and distribute videos on the various problems faced by Cambodia’s garment workers. Among the latest videos we featured earlier this month is ‘Is This Home?‘, which portrays the dirty, tiny rooms which house from five up to seven women workers. Other new videos highlight issues surrounding their health, occupational safety, sexual harassment, and working mothers.

Join us in bringing these issues to light. Please share this article and these videos to help raise awareness on the tragic and ongoing struggle of the Cambodian workers.