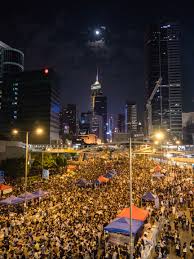 We wait to see what happens after the government adopted a more conciliatory stance of trying to wait out the demonstrators.

Downtown streets that were fairly crowded on previous nights began to empty late Wednesday, as many went home after days outdoors in heat that was sweltering even by Hong Kong’s tropical standards. But many predicted that crowds would build again later on Thursday, as demonstrators already got some rest.