We were excited when GetUp!, Sunrise Project and GreenPeace approached us to help them document coal-loading activities and its impact on the coastal environments of East Kalimantan region in Indonesia. EngageMedia has been training activists and journalists to document environmental issues in South East Asia, and curating and distributing videos for many years. This project was particularly special because we gathered aerial footage and pictures using drones. 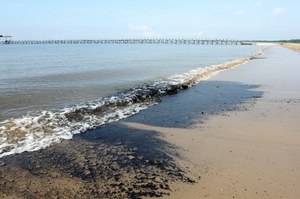 We worked with Mining Advocacy Network of East Kalimantan to identify areas that were most affected by coal trans-shipping operations. We selected a bay between Bontang and Kutai Kartanegara, a remote area about eight hours drive from Balikpapan, the biggest city in East Kalimantan Province. We wanted to get pictures of coal trans-shipping operation in the bay where the coal is transported from the conveyor belt right to the moored barge on the sea and then on to the big ships on the Makassar Strait.

As GreenPeace states, “From mining to combustion coal is the most polluting of all fossil fuels”. Coal is trans-shipped from Indonesia to countries like China and Australia. During this process of transferring coals from mines to the barges and then to the ships creates huge amount of spillage along the way polluting water and coastal environments. Just this year, Colombia banned coal producer company Dummond from using barges and cranes to load coal in Colombian ports to prevent “spillage and pollution of the seas”. 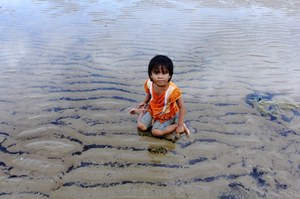 The decision to use a drone to document this process was a fortuitous one. Initially we were looking at hiring a helicopter, but had to drop the idea due the high rental cost. As we were exploring options, we found out about a private company in Jakarta that uses drones to capture ariel images and footage. So far, the company has worked mostly with corporate clients like property developers and architects who hire them to take ariel pictures of their properties. It turned out using drones has it own advantages. It can go much closer to objects than a helicopter would, and as it is small and fairly quiet it does not attract a lot of attention towards what it is doing.

It was sunny, with soft breeze on the day of the shoot. The pilot directed the drone, a hexacopter, from the ground, which had a digital SLR camera attached to it. The BBC has recently started using hexacopter to shoot news footage.

The drone was on air for five minutes, when it suddenly fell on to the sea. While the crew was unable to figure out the exact cause, they said it might have been due to a mechanical failure concerning the dynamo and the stabilizer of the drone. A second drone was sent over – a smaller quadcopter – that could only carry a GoPro camera without a stabilizer. The footage was a bit shaky, but there were enough images and footage to work with. We combined these images with some of the shots taken from the ground, and included interviews with local people and activists.

The debate about the use of drones is a growing debate worldwide. In this instance, it showed us that it could be used to document a growing environmental crisis in an affordable way while providing images from a new perspective. In Indonesia, there are several commercial drone operators, who operate in a legal vacuum as there are no laws governing the use of commercial drones. The Indonesian government has, however, been using drones to monitor border regions for a few years now and last year it announced plan to mass-produce surveillance drones that would fly all over its 17,000 islands.