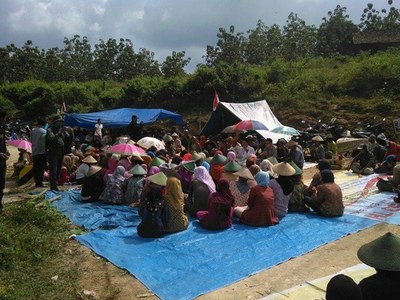 On 16th June 2014, tensions started to build at a protest by the local people of Rembang Regency on the extreme northeast coast of Central Java Province to resist a quarry and cement factory. The locals were resisting laying of the first stone of PT Semen Indonesia’s proposed plant in Gunem sub-district, Rendang, Central Java.

Three platoons of police, a company of military, and dozens of hired goons aided by water cannons were ready to disperse the demonstrators, all access points to the factory site were blocked by state security forces.

Several women involved in the protest were injured, and they were dispersed. However, dozens of women were seen guarding a tent of the Rembang people still standing near to the factory site.

Watch this video on EngageMedia to learn more: