It’s been so positively busy at EngageMedia recently! Last month, we had our first workshop in Singapore, Video4Change retreat in Indonesia, and video production and distribution training for Indonesian migrant workers in Malaysia.

This month, we had our first TV show broadcasted, saw 2 ‘Papuan Voices’ videomakers win awards, launched a video competition, and I just returned from our introductory trip to Thailand.

Over 2 weeks in early July, I travelled across 3 provinces in the conflict zone of Southern Thailand, and to the capital city of Bangkok, conducting workshops and presentations on video distribution and online subtitling (using Amara) to activists, video makers, students, migrant workers, and the independent media. 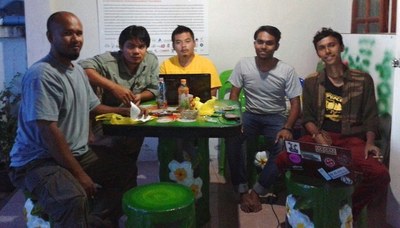 Starting off in the Southern province of Pattani, I made my way to the neighboring provinces of Yala and Narathiwat with the help of our partners, Southern Peace Media and InSouth. Members from both organizations were participants in Camp Sambel 2, and they were very heartened to see us follow up from the event.

Since the resurgence of a separatist movement in 2004, the 3 provinces have seen constant bomb attacks, shootings, and human rights violations. Most of the people in the region are Muslim and speak a Malay dialect, in contrast to most Thais, who are Buddhist and speak Thai. More than 4,300 people have been killed in the violence there, and as of 2011, the Thai army had 60,000 forces stationed in the region.

In recent years, the independent media organizations in South Thailand have organized themselves under the Deep South Watch network and website, with our partners being the main producers of video material.

Using their videos, we held a subtitling and video distribution workshop in the Prince of Songkla University. The 12 participants included students, video makers, and NGO activists. As participants could use both Thai and Malay, it was a particularly interesting subtitling session, and further proved how crucial translation is in sharing and understanding critical issues. 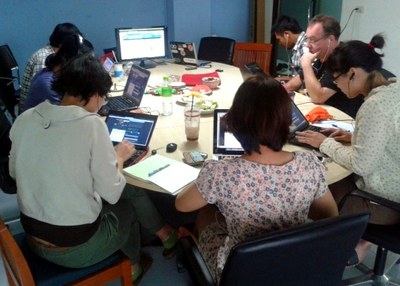 The next week was spent in Bangkok, the capital city of Thailand, and a hotbed of regional NGOs. With the help of our partner Prachatai, an independent media organization, I met with almost 20 organizations there and held 3 workshops.

The first was held with activists, video makers, and journalists. I introduced them to EngageMedia, and went on to conduct sessions on video distribution and online subtitling. A rather interesting video called Witch Hunt Online, on the control of and threats on the Internet in Thailand was subtitled into English. I’d recommend everyone to watch it.

The second workshop was held with workers from the Try Arm workers cooperative and fair trade fashion company. The company was started by ex-workers who were retrenched by Triumph International. They found the workshop to be of great interest, and feel encouraged to produce more videos, and share the skills they learned with their colleagues.

A final workshop was held in an interesting space called the Labour Culture Centre set up by Burmese migrant workers in Bangkok. The workers pooled funds and filled a 2-story building with computers, making it a free IT training center for fellow Burmese. 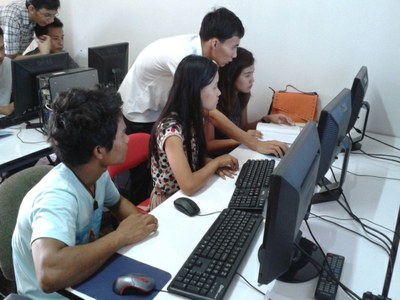 The online subtitling session there was also very interesting, as videos that were transcribed into Thai at the first workshop were translated into Burmese. An example of such a translated video is available here.

The feedback from participants of all the workshops was that they find Amara to be the fastest and easiest way to subtitle videos. They also continue to use and share knowledge of the tool with their networks.

Throughout the week, I met with a host of different organizations, including Amnesty International Thailand, Thai Netizen, Siam Intelligence Unit (http://www.siamintelligence.com/), and the nation-wide Topporn Student Network, all of whom have expressed that our work is unique and that we should work together on future projects.

We will be looking at all our prospective partnerships and working on them in the months ahead. In the meantime, feel free to look through all the amazing new content that’s come to us from Thailand, Singapore, and Malaysia.

Every single day in Thailand was a valuable learning experience for EngageMedia and myself, and I’d like to extend my gratitude to all hosts and partner organizations there. In particular, I’d like to express my appreciation to Bree from Southern Peace Media, and Pongpan from Prachatai for being my guides and making all our work in Thailand possible. More photos from the trip are available here.

I’d also like to happily mention that I’ve also learned enough Thai, so I was able to conduct workshops and presentations in a combination of Thai, English, and Malay (especially in the South).

There’s more exciting news coming from us in the next couple of months. The Papuan Voices DVD is set to be launched in Indonesia in September. And in the same month, we’d be screening selected videos from EngageMedia at Palate Palette in Kuala Lumpur, Malaysia.

I’ll continue building on our old and newfound networks and community of subtitlers to continue transcribing and translating content from all over the region. I’m also working on improving the Amara system, and users may want to note that 2 new Persian languages (Dari and Hazaragi), and 2 new Indonesian languages (Buginese and Seko Padang) have been made available.

If you’d like to help us, join the EngageMedia team page, and you can quickly and easily add more translations in the languages you know, contributing to having more people around the world understand these important stories.