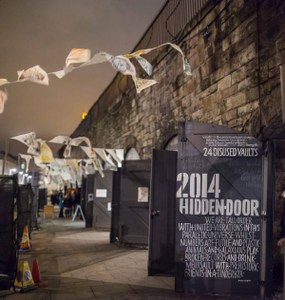 On 1 April 2014, videos from our Crossroads and Papuan Voices projects, ‘Song of a Foreign Land’ and ‘Ironic Survival’, were screened at the Hidden Door Festival in Scotland.

The independent arts festival which lasted for 9 days used innovative spaces by unlocking 24 forgotten vaults and filling them with art installations, live music venues, bars, a theatre and a cinema. EngageMedia’s videos were screened in the International films section one of the nights co-organised by Video Activism Night.

The screening was a great success with the converted cinema space packed with about 200 people visitors who stayed for different sections. The night was opened with speakers on films representing the first Community Video made in the 1980s in the UK. 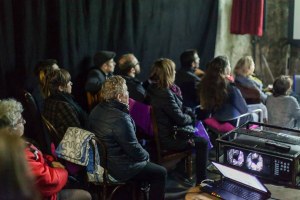 It was noted that several guests described our work as important and powerful, and she believes this was the first experience of video activism for many visitors who appreciated the screening as well as the information which was provided to them about the organisations, providing them with a new perspective on how activists can use modern technology to fight for social change.

The organisers are also seeing the potential in having the programme screened to communities around Scotland in order to raise awareness. We look forward to working more closely with Video Activism Night, and the next Hidden Door Festival in 2015!