Plumi 4.5 was soft-launched at the beginning of the year. Now that it’s been running smoothly for a while, we’d love to introduce you to all the new features and improvements.

The first thing you’ll notice about Plumi 4.5 is the beautiful new skin. We’ve left the old layout inherited from older versions of Plone behind. Right out of the box you will be pleased to see a shiny new visual theme, with a grid-layout and contemporary styling, just right for a video sharing site.

On the front page of the new Plumi skin, you can view all the latest videos that have been uploaded, plus feature a video in the slot on top, ready to playback using mediaelement.js player – an HTML5 player that will work in any modern browser. We’re re-worked templates throughout the site, making improvements to UI, with more planned for the future.

You can also customise Plumi’s visual theme for your own needs, and in Plumi 4.5 it is easier using a new implementation of the Diazo theming engine and plone.app theming. Diazo allows you to apply a theme contained in a static HTML web page to a dynamic website created using any server-side technology. With Diazo, you can take an HTML wireframe created by a web designer and turn it into a theme for Plumi.

The site is designed to adapt to different screen sizes, and videos will play back on both Android and iOS devices. 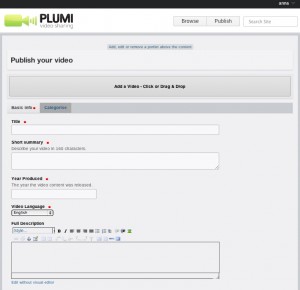 A new video publishing form makes it even easier for users to upload video to a Plumi site. Just drag-drop or click browse to select a video file, and watch it upload in the new progress indicator, while you add metadata to your video.

You can click over to another dynamically loaded page as you upload, where you can categorise the film and add a Creative Commons license.

We have integrated Amara (formerly Universal Subtitles) which allows users of your Plumi site to easily add or view subtitles for each video, created or attached to the video using the Amara system. Watch the video above to learn more about how easy it is to use Amara, which is a powerful addition to Plumi in terms of accessibility, and use in multi-lingual websites.

We are looking forward to a 4.5.1 release that may include some more work on templates, followed by 4.6 in which we plan to integrate videos that are hosted on other sites, and new features designed to enhance the ability to use Plumi for social change impact.

You can read the full list of Plumi features here.