This month we are featuring Ozair Rao, a filmmaker from Pakistan who has combined his passion for travel and filmmaking into a mission to inspire change. 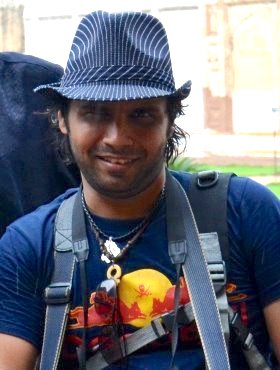 About: Ozair Rao is a filmmaker from Pakistan who has combined his passion for travel and filmmaking into a mission to inspire change.

Ozair Rao (OR): I am a documentary filmmaker and photojournalist working towards being a cinematographer. I have worked on several documentaries, travel pieces and experimental videos as well as some commercial projects.

Some of my films include “Displaced, the Forgotten Kids”, an award-winning documentary about the children living on the streets of Karachi in Pakistan, and “Karigar, the Fair Trade Way”, a film that has screened in the UK, Australia, Pakistan, Malaysia and Indonesia.

I’m currently working on two documentaries. One of them is called “Safar Dar Watan” (The Journey Within). The other one is about dancing meditation.

Besides these film projects, I recently started a non-profit initiative called Artistocrat whose mission is to bring about social change through creative arts. I am also working on my travel channel called Ozwanwinkle.

I went to university, specialized in network engineering and started the rat-race in the corporate world as soon as I graduated. Luckily, I have an elder sister who helped me tap into my creative side and inspired me to take up photography as a hobby.

I inherited my sister’s Canon 350D and got to work. Soon after, I was offered a position at Channel V Pakistan as a producer. When I started there, I didn’t even know that you could say ‘CUT’ during filming. I used to position the camera and try to film the whole scene in one go.

That’s how it started. When I was filming my first documentary series called “Addicted”, I realized I wanted to do it for the rest of my life.

EM: As a video-maker, what are the challenges of working in Pakistan?

OR: The biggest challenge to working in Pakistan is the government surveillance and censorship of media. A lot of media outlets are controlled by the government and some of my documentaries have had to be re-edited for broadcast on TV.

The other issue is one of safety. I have had my equipment stolen from me while a gun was pointed right to my face. It happens in both urban and rural areas, and I have begun to accept it as a part of the trade.

EM: Could you describe the political situation in South Asia, and how are filmmakers responding to events in Pakistan?

OR: I think filmmakers are doing what they do best. They are making films and trying to get them out there. As the government watches over the media very closely in Pakistan, it becomes harder for filmmakers to work on sensitive issues. However, I am glad that distribution is becoming easier with access to new technology.

OR: Mostly I focus on social issues pertaining to marginalized communities and those who are forgotten by society, but I am not restricted to any specific issue.

EM: How do you think online distribution is changing the field of independent video making?

OR: I think online distribution is the best thing that could have happened to independent filmmakers. I know some people say it is affecting the quality of the films but I believe that to make a good film, you have to make a bad one first.

EM: How do you use online tools in your work?

OR: I use a host of online tools for my work. I am also working towards incorporating AdSense and other marketing tools on my website to earn some extra cash. I have a vlog called Ozwanwinkle, which is a Flickr outlet where I share my photo essays and videos from my travels. I’m also currently putting together a training course for non-profit organisations and independent artists to teach them to strengthen their online presence.