King Catoy is a prolific and award-winning human rights filmmaker from the Philippines. He was one of the founding members of Southern Tagalog Exposure, an independent multimedia collective, and later the Executive Director of Mayday Multimedia. He is currently the Video Lead of EngageMedia. 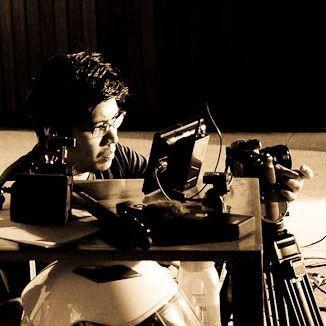 About: King Catoy is a prolific and award-winning human rights filmmaker from the Philippines. He was one of the founding members of Southern Tagalog Exposure, an independent multimedia collective, and later the Executive Director of Mayday Multimedia.

King Catoy (KC): I have always worked with marginalized sectors here in the Philipines. Their struggle and aspiration for a society with social justice and genuine peace have always inspired me as filmmaker. At the same time, I have a strong realization that filmmaking is a collective endeavour. Thus, I’ve always been part of video groups or collectives and their formation.

KC: I was quite lucky that I was exposed to the arts at a young age. My parents were both theater artists and my dad worked in a cultural institute in the Philippines. Later, I will study drama and general arts in high school. Through these circumstances, I had access to screenings of local and foreign films outside what was available in movie theaters,  it made a mark on me that possibly in the future, I can be part of something worthwhile like filmmaking. In high school, I had the opportunity to meet Filipino independent filmmakers and with my exposure with them, even though it was fairly limited, the idea of creating films became more realizable. 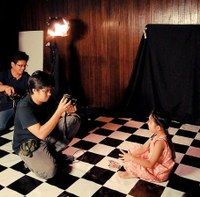 KC: My exposure to different peoples’ organizations made it possible for me to be familiar and interested  in many issues within what we call human rights. Though, I think the pivotal issue if you can call it that would be the neo-colonial relations between my country and the United States of America.

KC: It was a process between being a radical or a radical filmmaker if I may put it that way. In college, I became a student activist and my involvement in the arts took a backseat. It was during this time that I went out of the campus to visit workers’ picket lines and farmers’ communities. I also took part in fact-finding missions that documented the abuses of the military during their operations against the guerillas in rural areas.

Since I had my dad’s slr camera I was tasked to take photos of rallies and other activities by peoples’ organizations. Though the images I took weren’t that impressive, I realized its potential to depict the life and struggle of the opressed. Together with like-minded activists who had slr and video cameras, we formed a video collective that made documentaries, news reels, music videos and experimental films about the plight and struggle of peasants, indigenous people and workers for social justice. 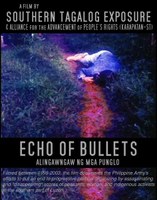 It was during this time that I was abducted, together with human rights volunteers, by suspected military personnel. I was filming a human rights documentary entitled “Echo of Bullets“. Two of my companions, a human rights group leader and a peasant leader were killed. I wasn’t the target of the extra-judicial killing and was set free. At gunpoint, the abductors told me to stop working with human rights groups. Obviously, I didn’t follow them. I have always thought that to make them unhappy would be the least I can do.

In between video productions, our collective continued to do volunteer work for NGOs, we wrote press releases, made posters and flyers and prepared multimedia presentations. Now that I devote more time to filmmaking, I believe that this is my contribution to the struggle of marginalized sectors that I have called my own.

EM: Tell us about your favourite piece of video you have made, in regards to social justice or the environment.

KC: Aside from my harrowing experience while filming Echo of Bullets, I think it would be the documentary “The Enemy” that I was tasked to direct by the video collective I work with in 2003. It was my first time to direct. It was a documentary that showed the history of the neo-colonial relations between the Philippines and the USA with the US war on terror set as a background. The script was written by an alliance against US intervention that also produced the video. It took me almost two years to finish it.

The main problem was the availability of footage for the historical parts of the video which compromised more than half of the documentary. To be able to finish it, I had to reappropriate different images from various sources to fit the film. I had to make my own images through motion graphics. I also had fun editing the music video sequences which  borrowed from Jimi Hendrix and Trent Reznor, quite different from what was used in local political videos back then. I guess this is my favorite because I learned a lot while doing it.

KC: Independent films uploaded in the web are now accessible to the people who have internet. Sounds great, right? But wait… Actually, all uploaded videos are accessible to all of us who have internet, regardless of content and form. From the absurd to the funny, from fascist propaganda to socially relevant independent films, they’re all easily available such as the problem really now is how to build an intelligent, discerning, and compassionate audience among a general mass that is also being wooed by videos that basically uphold the status quo.

So I think that as an independent filmmaker, the challenge is to catch and hold the online public’s attention through that right blend of form and content. But we should not be contented with catching attention, we should be also be concerned with conciously building an audience. I am only assured that my work is being maximized for the potential of social change if I continue to work with people’s organizations who will work just as hard as me to reach an audience that have the best chances of being engaged and empowered.