We interview Arvind Raj, a video journalist working with Free Malaysia Today, one of the country's most popular independent online news portals. 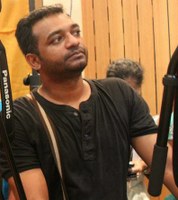 About: Arvind Raj is a video journalist working with Free Malaysia Today, one of the country's most popular independent online news portals.

Arvind Raj (AR): I am more of an activist filmmaker than a commercial filmmaker – I feel the subject, the issues deep inside the heart before making an effort to create a film or video.

AR: Video is the best tool for showing evidence of what really happened in any situation. No one can deny or manipulate the issue or the incident once it is recorded in a genuine way.

EM: What radicalised you as a filmmaker? Did it happen in the moment, or was it a process?

AR: I became a filmmaker not by choice but by chance – I participated in many street demonstrations and protests to fight against injustices and to give a voice to the voiceless, but without a medium such as video I couldn’t explain a lot of the incidents because I am not a good writer.

I created a blog and updated it frequently from the scene where marginalised people were being bullied. I took photos and videos from my mobile phone to show this. Later, I attended the Citizen Journalism training by the International Centre for Journalists (ICFJ) and progressed from there.

EM: As a videomaker, what are the challenges of working in Malaysia? What are the restrictive laws?

AR: A general challenge is that journalists and videomakers do not have immunity or security in this country. If the authorities feel that it is not safe for us to film something, they will go all out to stop you from filming. Arresting us for no reason is a way for them to stop us, especially in the street demonstrations where the police brutality can be seen in an open space.

AR: The issues that I have highlighted in my videos all relate to human rights: poor and marginalised society, the transgender plights, demolishing the poor heritage villages, estate-worker issues, the promises made by some politicians and the disappointment they engender.

EM: Tell us about your favourite piece of video you have made, in regards to social justice or the environment.

AR: I did a video called GATCO – 33 Years of Dreams Shattered, on the plight of estate workers in Negeri Sembilan (which is a 2 hour drive from Kuala Lumpur). The victims are poor Indian estate workers who have been working on a piece of land for more than 36 years, believing that they will own the land one day. However, to their dismay, the land was recently bought by a private company through an auction. State and federal governments failed to help them despite making past promises of help, during elections, in order to win their votes.

AR: Let’s compare it with several years ago when the internet was not widespread in Malaysia. People believed what they saw in the mainstream media – for them that was news and that was the most trustworthy medium – but now it has changed.

EngageMedia, YouTube, Free Malaysia Today, Papuan Voices and Komas are some of the platforms available to highlight our issues as an independent filmmaker. If a video is made in any foreign languages or dialects, tools such as Universal Subtitles help to spread the message. Anyone in the network can contribute the subtitles, which helps further distribution of the issues.

EM: Tell us more about the role of video in this coming elections, and how film/videomakers can contribute to this democratic process?

AR: As a filmmaker for Free Malaysia Today, I have the advantage of publishing videos of interviews, speeches and peoples’ opinions from both parties; the ruling government party and the opposition party, together with the independent candidate. These kinds of videos cannot be seen in any mainstream media.

We are giving a clear picture of the political scenario in Malaysia for people to evaluate the political parties’ genuineness, sincerity, contribution and manipulations. We are fair in reporting both angles, although sometimes we lean more towards the opposition activities to balance their limitations in mainstream media coverage.