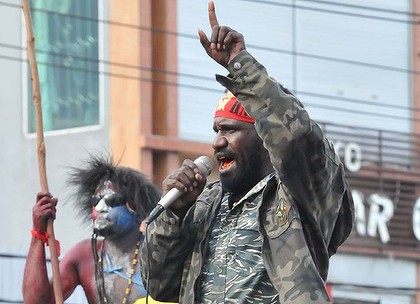 On June 14, 2012, at 09.30 am (West Papua time), Mako Tabuni, Secretary-General of West Papua National Committee (KNPB), walked to the Government Housing Complex (Perumnas 3) in Waena in Jayapura. Mako Tabuni stopped by to buy ‘pinang’ (betel nut) from a woman trader near the Waena-Jayapura taxi pool. Mako chatted with a friend named HS, a university student.

Soon after, HS bid farewell to Mako as he headed for his campus. HS said Mako wasn’t carrying a bag. The activist was wearing jeans, a t-shirt and an army jacket he often wore in public rallies (see captioned photo) and daily activities. HS left Mako alone near Perumnas 3. He wasn’t accompanied by his KNPB friends.

Just a little over 2 minutes after he left Mako, HS heard four gun shots from the direction of the housing complex. HS, who was riding his motorbike, turned back to where he left Mako and already found him lying on the road. HS saw four men in plain clothes carrying Mako’s body and placing him into their car. The woman trader whom Mako bought ‘pinang’ from her was seen crying and running away from the site.

Another witness, YM, said Mako was shot by an armed man. The four other men who came together with the shooter had straight hair. YM said they were not Papuans. He said the men came in the same car, an Isuzu Panther with the registration number DS 1591 AE. The men also fired shots to the sky to scare the people in the location. Armed men from two other cars, a Daihatsu Taft Jeep with the registration number DS 447 AJ and a blue Toyota Avanza (or Inova) also joined the shooting. All where plain-clothed and armed. Mako Tabuni’s body was put in the Isuzu Panther van (registration number DS 1591 AE). He was brought to the Bhayangkara Police Hospital and pronounced dead an hour later.

Based on the autopsy conducted by the hospital medical team, Mako was dead due to fatal wounds to the head. The doctors also found bullet wounds in his hips and both thighs. Immediately after the Mako’s body was taken away, Tabuni’s supporters set fire to four cars and 26 motorbikes in Perumnas 3. They set fire to one motorbike in the nearby Waena Expo area also. About 18 shops were ransacked. It took a full hour for the nearby police to arrive and disperse the crowd.

Police claimed Mako Tabuni was allegedly involved in recent Jayapura shootings. KNPB and many other West Papua observers refuted the idea. Foreign journalists still find it difficult to get permission to cover the province. The Foreign Affairs Information and Media Director, P.L.E. Priatna, said foreign journalists are allowed to cover as long as they state what they want to cover in the permit application form.

“Don’t say they want to cover A, but the report is about B,” he told the press.Furthermore, he said foreign journalists covering West Papua would be surveilled by intelligence officers so they would not exaggerate in their coverage.