Stories of Freedom and the Struggle to Keep It 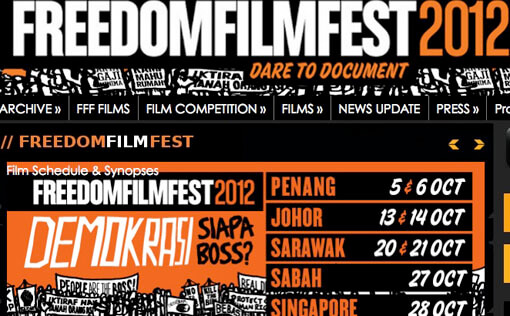 I had the pleasure and opportunity to attend this year’s Freedom Arts Festival (FAF2012) held in Jaya 1 in Petaling Jaya in Malaysia. It is the 10th year of the Pusat Komas’ Freedom Film Fest. As such, this year, it was more than a film festival. The two-day event included workshops on utilising different art forms for activism, booths that showcased the work of different groups, and a graffiti board where everyone was invited to draw with local political cartoonists (mostly those whose comic books were banned).

But really, I came for the films. And the FAF2012 didn’t disappoint. All of the films I saw during the festival told different angles of democracy, freedom and human rights, and the struggles to fight against those that seek to take those away from different sectors of society. The film festival was bracketed by two highly acclaimed documentary films.

The opening film, ‘5 Broken Cameras’ by Emad Burnat and Guy Davidi, told of the non-violent resistance from the residents of a Palestinian village of Bil’in against the increasing occupation of the Israeli army. The story was told from the perspective of Emad Burnat, a farmer who bought his first camera to document the birth of his fourth son, and who ended up being the documentor and archivist of the struggle to keep their land safe from encroachment from the Israeli army. It documents how his cameras witnessed until each of them broke, the loss of their livelihood, the injustice their village suffered from the Israeli military, the solidarity they received from Israeli activists, and the clever efforts of the citizens of Bil’in to protect their land. As a documentor and witness, Emad Burnat captured not only the struggles that his village faced, but the heart, the hope and the humour of the local activists had as they went about fighting for their rights and protecting their lands.

Ending the festival was the closing film, ‘Call Me Kuchu’ by Malika Zouhali-Worral, and Katherine Fairfax. It documented the struggles of gay and lesbian rights activists in Uganda in a time when their government sought to pass a law that made homosexuality punishable by death. It told the tale of David Kato, the first openly gay man, and his friends, as they fought to defeat the legislation. There were moments of victory in the film: when they won against a tabloid that spied on gay and lesbian bars, took photos and published names of gays and lesbians; and when the international community made it known to the Ugandan government that the passing of such a discriminatory law was unacceptable. And there was despair: a lesbian telling the tale of her ‘corrective rape’; the fear that being ‘named and shamed’ in a publication; and David Kato’s murder. But there was also hope: the efforts of the gay and lesbian activists to find spaces where they can be themselves and safe; and the continuing struggle both in Uganda and internationally to stop the law against homosexuality from being passed in Uganda.

In the middle of these two films were the gems of the entire film festival, the winning documentaries of the 2012 Freedom Film Festival (FFF2012). Three Malaysian documentaries that sought to shed light on unknown moments in Malaysian histories and unheard perspectives on current events.

The first film, ‘The Silent Riot’ by Nadira Ilana, tells of a moment in the history of Sabah that not many know of and is hardly talked about. In 1985, the ruling political party in Sabah lost to the opposition. What happens next could give credence to any political conspiracy theory (and I mean that in a good way). The coalition between Parti Bersatu Sabah (PBS) and the United Sabah National Organisation (USNO) that toppled the ruling party, broke down when the head of USNO got into backdoor deals with the national government to take control of Sabah through violent threats. The overnight power struggle between the two opposition parties signaled a year of demonstrations that silenced the majority of Sabah.

The second film, ‘M-C-M’ by Boon Kia Meng, depicts a different picture of Malaysian economic growth and development from the perspective of young Malaysians and the issue of home-ownership. The film takes us through the story of how Malaysian capitalism has evolved in such a way that middle class young people in the country will not be ale to afford their own homes even as they grow older. The cleverly shot and edited film lends a cool, young, hip vibe to an explanation of modern capitalism in Malaysia.

The third film, ‘The Rights of the Dead’ by Tricia Yeoh, explores the death of Teoh Beng Hock, who died under the custody of the Malaysian Anti-Corruption Commission (MACC). Government-led investigation ruled his death as ‘suicide’, claiming that he jumped off the MACC building. Other evidence suggest otherwise. The filmmaker takes reveals the connections and politics between government agencies in Malaysia that should ensure justice for citizen but as ineffective in providing that, especially for those who die under custody. Interspersed in the story-telling are interviews with Beng Hock’s family and fiance, who tell of how they found out about his death and how it has affected them. To me, the film was a heartfelt and honest ‘wtf happened?’ — an exploration of what really happened to Beng Hock on the night of his interrogation, how much the government covered it up, and how it was not an isolated case.

At the end of each film, there was discussion about the issues covered. The audience was given a chance to share their thoughts, ask their questions and provide feedback on the films. And that was such a great thing to see: for the audience to try to connect the gay and lesbian rights activism in Uganda to the persecution of gays and lesbians in Malaysia; to get questions to clarify the Palestinian-Israeli issues; to discuss death in custody issues in Malaysia and so on and so forth.

I do hope there’s an FFF2013, because if the quality of films that will be shown there is half as great as the ones shown in FFF2012, I’m definitely in.