As I promised on my previous blog post, I am going to share the story of our training for migrant workers in Indonesia. We did two trainings within two weekends time. The first one was in Indramayu, West Java and another one was in Cianjur, also in West Java. Both Indramayu and Cianjur were two of the places in Indonesia that send most migrant workers abroad. This post is about the training we did in Indramayu. Before I tell you about how the workshop went, I am going to tell you a little about Indramayu.

Indramayu is located in the north coastal area of West Java and is an agricultural area and is one of the biggest rice producers in the country. The problem lies in the land ownership, where only a little over a quarter of its population are landlords and whilst more than 70% of its population are farm workers , who own very little land (less than 0.5 ha) or do not own land at all. Besides known as an agricultural area, Indramayu is also known as oil and gas producer, but the industry is being dominated by people from outside the area (i.e. Jakarta). Although Indramayu is a very rich area, but many of its population live under poverty line. The area has been sending migrant workers since around three decades ago, but the wave of migration risen sharply when the economic crisis hit the nation at the end of 1997. Many women from the area saw working abroad as the only hope to build a better future for themselves and their family. By paying a lump sum of money to a ‘sponsor’ (broker) they could go to other countries, mostly middle eastern countries, to work. The number of people from the area working abroad put Indramayu as one of the biggest migrant worker senders in the country.

This wave of migration, of course, leaves a lot of social-cultural problems. Human-trafficking is a very common case. Instead of being sent abroad to work, a lot of women (a lot are underage) from the area were being ‘sold’ as sex workers in Jakarta or in other countries. Abuses, rapes, unpaid wages, document forgeries, illegal extortions, and child labour are also often found. Not to mention the domestic problems that occur as the excess of migration. Indramayu dominates the number of problematic migrant workers with 1856 cases during January – May 2012 alone (data: BNP2TKI). And the number was only the tip of an iceberg.

Between the time we had our workshop there and the time I am writing this post, there are two underage female migrant workers (both 16-year-old) facing the death penalty and life sentence charges in Singapore accused of murdering their employer. They are being tried under Singapore’s penal code instead of under child protection laws because their age was falsified by their employment agents. But, besides the sad stories, there are also a lot of success stories, which encourage more people to take all the risks to work abroad. This situation is one of the reasons why we chose Indramayu as our workshop destination.

My colleague, Yerry, and I drove around seven hours to Indramayu on the morning of July 6th. We got there around late afternoon and went straight to opening the workshop in a house that often used by migrant workers to hold meetings. We started the training with introduction and we found out that some of the 12 participants were former migrant workers who were working in Taiwan, Malaysia and Arab Saudi, some were family members of migrant workers (husbands and children) and a couple of people have signed up to go abroad for work. On the first day of the workshop, we delivered basic theories on journalism and citizen journalism. Learning from our workshop experience in Kuala Lumpur, we made the theories shorter and easier to understand, putting into account that the participants came from different backgrounds of age and education level.

On the second day, we talked about all the technical aspects of making a video, starting from the theories to the practice. Then the participants were divided into three groups to discuss and decide on a story, build a storyboard and went out shooting. After spending a few hours shooting in the area, the participants learned how to edit their videos. At the end of day 2, we asked the participants to make a real story of migrant workers and find resource persons to be made into a video the next day.

On day 3, the participants went out to their shooting locations according to the stories they have decided on the previous day. They came back to the workshop venue in the afternoon and worked on editing their footages and made them into videos. 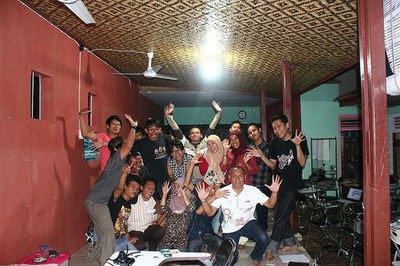 It was fun watching the participants experimenting with editing styles. Some put music and narration over their videos. After finishing the editing process, the participants learned about distribution and how to upload their videos to the EngageMedia site and other sites as well. But because of the very slow Internet connection not all of their videos were successfully uploaded to EM sites. But some that did, can be seen here.

The workshop ended on the early evening of day 3. Besides a few videos came out of it, a commitment to build a media group also surfaced. They agreed that the group will be the voice of migrant workers, to tell stories of migrant workers from Indramayu. Let’s wait for the outputs of this group. Hopefully soon. So, stay put, folks!