Nova Ruth is a vocalist, activist, designer and entrepreneur who is committed to bringing Indonesian culture to a global audience. 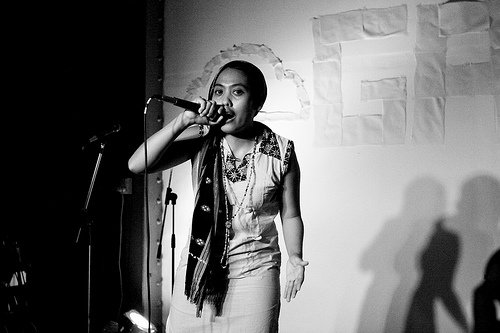 About: Nova Ruth is a vocalist, activist, designer and entrepreneur who is committed to bringing Indonesian culture to a global audience.

Together with collaborator Grey Filastine, Nova created a contemporary rendition of the Indonesian song Gendjer Gendjer. Here we talk to her about the song’s controversial history and what motivated her to give the tune new life.

Nova Ruth (NR): At first I never knew who wrote it, I just knew it was sung by Lilies Suryani and Bing Slamet, and had originated in Banyuwangi, East Java. But recently I found out that the writer was a man called M Arief, and he wrote it in the 1940s. He was inspired by a plant – gendjer – that was used to feed the animals. Because of the Japanese invasion conditions were getting harder and harder, so people started to eat the gendjer.

EM: Tell us about the history of this song in Indonesia. Why did it become so controversial and why was it banned during the Suharto years?

NR: Historically it was a theme song of the PKI (Communist party). Because communism was seen in Indonesia as a latent threat, it was banned by Suharto. Gendjer (the plant) is the symbol of poverty and a communal way of living – the Communists adopted the song during the Suharto era because it fit their philosophy. Because it was so big at that time, many people believe they wrote the song but in fact it was created more than 20 years before the Indonesian Communists sang it and made it popular.

EM: Why was it important to you to rehabilitate this song?

NR: My mother came from an Army family. Under Suharto’s command my grandfather was involved in the 1960s in getting rid of Communists. It’s widely known that seven army generals were killed at Lubang Buaya during the 1965 coup but the murder of almost one million Communists by the Army during the Suharto era was covered up. History never mentioned that genocide – and I don’t think that is right.

At the same time, I know my family was also threatened by Communists while my grandfather was away on duty. It was a war. And my mum would’ve been killed if my grandmother had not bravely held an AK47 every night to protect her daughters.

As someone who didn’t live during that era, I want to be part of telling that story – even if it’s a small part. To me, the history of Indonesia in the 1960s and the Gendjer Gendjer song are at the same level: they’re both are banned. And I want to at least do one thing – I want to sing the song again. I didn’t really know the history when I heard Lilies Suryani sing it, I only knew it was a beautiful song. Now that I know the history, it has encouraged me to sing it more and more.

EM: Is it important to you that the story of this song gets out to an international audience? What does the song say about modern day Indonesia, and how is the song viewed in Indonesia now?

NR: I imagine this song will be appreciated by people outside Indonesia because it always has been, but I also hope it will bring more awareness for people within Indonesia. This song is still shunned by many Indonesians. I hope with this rendition, and these new sounds composed by my collaborator Grey Filastine, people will like it more.

EM:How has freedom of speech changed since Suharto fell? Do artists, singers and songwriters have freedom now? Do you ever fear the authorities as an artist?

NR: I haven’t seen any artist or musician who can really speak freely in the higher level in Indonesia – but I also haven’t seen any of them banned or having a real problem with authorities. You can also see there’s no real enemy like Suharto now.

Now, being critical is more usual. It isn’t so much a choice around whether it will be exposed. In the old days, criticising the government, even just a little, meant being checked out. Now, you are just considered “underground”. There’s nothing else special about it.

EM: Tell us more about the collaboration on the video – whose idea was it and who else worked on it?

NR:It was Grey and I who had the idea. We had both discussed this idea way before we found the people who would help to realise it. We worked with Astu Prasidya, a great director from Malang, and also with Taring Padi, an artist collective that often talk about this history in their art. We also worked with a group of video production and animation students from Malang who happened to be in Jogja for an exhibition that day!

Is your work usually politicised?

NR:While I was with my duo rap group, Twin Sista, I worked mostly on music that is related to nature and the environment. I believe everyone has their own politics in life. You could even call your morning coffee your politics. I don’t generally describe my work as political – I just want to say things that I see, know and feel. I rarely write about things that I don’t know intimately. I don’t write about issues that were reported in the media unless I have witnessed them myself. For example, I didn’t have much to say about the revolution in Egypt until I visited the country for nine days and felt the air, the friends and the community. Now I can say things about Egypt.

Nova Ruth used to work for EngageMedia and was one of the organisers behind the original Camp Sambel in 2010.