In the coming weeks EngageMedia is undertaking a re-design of our video-sharing website focused on social justice and environmental video in the Asia Pacific.

EngageMedia.org is the media and technology activism organisation based in the Asia-Pacific region, which initiated the Plumi video-sharing application in 2006. Plumi is currently maintained by EngageMedia in conjunction with Unweb.me, who have been the primary developers of Plumi since 2009. Unweb is also comrades from our days as part of the Indymedia network.

Our original design has served us well since 2006, but its definitely time for a revamp. For various technical reasons, we have been limited in terms of our design to something close to the look of an older version of the Plone content management framework on which Plumi, our free software video sharing application, is based. Changes we are working on now in Plumi are enabling us to separate the design from the content management system, and have a freer approach to create the kind of user-interface people expect from today’s online video applications.

We’re using Diazo to re-theme EngageMedia.org and Plumi. Diazo “allows you to apply a theme contained in a static HTML web page to a dynamic website created using any server-side technology. With Diazo, you can take an HTML wireframe created by a web designer and turn it into a theme for your favourite CMS, redesign the user interface of a legacy web application without even having access to the original source code, or build a unified user experience across multiple disparate systems..”.

I’m currently in Athens with Unweb, the programmers who work with us to develop Plumi and the EngageMedia.org website (I’m a co-founder of EngageMedia, but these days I usually focus on Plumi development, as well as my own film production work). It’s very hot in Athens, but we’re hiding inside from the heat, getting deeper into the new design and functionality required for our new look.

I’m here working with Dimitris, Christos and Markos from Unweb. Yiannis, our designer and front-end developer has joined us in Athens and is now working with us from the Netherlands. Mike from Unweb will be coming to work with us next week.

Unweb are not only great programmers but excellent cooks! As is their housemate Nikos 🙂 We will have produced a lot of code and consumed a lot of food by the end of our sprint 😉

Why Athens, you may ask? Well, Unweb are experts in Plone and have been the main developers of Plumi for some years now. They’re also comrades from our days as part of the Indymedia network.

Normally we work together online, but I happen to be here in Athens to work with them on another project based on the Plumi video-sharing app, called Critical Commons. This is an online cinema educational tool originally built by myself, Infinite Recursion and EngageMedia for the Institute for Multimedia Literacy at the University of Southern California School of Cinematic Arts (a project developed by Steve Anderson and Erik Loyer). It’s also a project designed to push the boundaries of fair use in an educational context, challenging the legal limitations copyright places on distributing film clips online. It also forms the multimedia backbone for Scalar, an open-source platform for media-rich scholarly publishing. 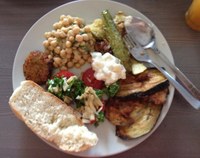 For the EngageMedia re-design, we’re also looking at re-engineering the way video activists interact with the site, in terms of building better steps towards activism and advocacy into the user-interface. Basically we want to encourage users to take the next step after watching a video – whether that’s finding out more info on the issue, taking part in discussions, finding others who are active around the issues and taking part in social movements, and/or taking direct action.

This will all happen in the next stage of the re-design. We’re looking for feedback and thoughts on implementing this “video for change” philosophy into our website design, so get in touch if you’re interested in giving your input.

We’ve also just released a new version of Plumi, which includes major improvements to the way videos are published via Plumi, which I’ll post some news about shortly. Exciting times for EngageMedia and Plumi development! We’ll keep you posted in the coming weeks…