EngageMedia with the Justice, Peace and Integrity of Creation (JPIC MSC) and Secretariat for Justice and Peace (SKP KC) present PAPUAN VOICES – untold stories of the conflict from Papuan’s themselves. Aside from Jakarta, the screening will also be organised in Jayapura, Merauke, and Semarang to date.

The Papuan Voices project overcomes political, geographical and financial barriers – as well as lack of technology – to bring important Papuan stories to the world. In doing so, it shines a light on the injustices that regularly occur behind the closed doors of this resource-rich and restive province. 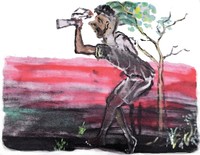 Surat Cinta Kepada Sang Prada (Love Letter To The Soldier): A moving missive from a Papuan woman to her long-lost lover – an Indonesian soldier who was once based in her village on the PNG-Indonesian border. Theirs was a controversial relationship but she begs him to return to meet their three-year-old daughter: “I will continue to wait for you, Samsul. I don’t care what people say.”

Mama Kasmira: A Papuan cocoa farmer from the Indonesia-PNG border region had to leave her farm to work for a palm plantation when the village elders made a deal with a Rajawali Group company to sell her land. Every day Kasmira works hard under the hot sun, clearing bushes for the plantation. However, she has great hopes for her three children.

Harapan Anak Cendrawasih (Hopes of the Cenderwasih Children): Primary school children in Arso on the Indonesia-PNG border are keen to study – but teachers rarely come to the local school. The one teacher who does come is only on a short-term contract and gets paid once every six months. When school is out, the kids end up doing hard labour for the local palm plantation to earn money and kill time.

Kelapa Berbuah Jerigen (Jerry Can Coconuts): The Malind tribe in Merauke is proud of its ecological traditions – each clan in the tribe is responsible for protecting a natural element. The Moiwend clan is responsible for the coconut trees and fruit. However, in recent times Malind youth have started using coconuts to make alcohol. The home-made drinks – which are much cheaper to buy than beer and spirits – have added to the town’s problems. Now, some Malind elders are calling for the reinstatement of customary laws that would punish those who make use of coconuts in this way in order to save their tradition and their community.

Awin Meke: Indigenous Papuan women traders struggle to sell their goods in modern Jayapura. In their first fight, the women won themselves a space to set up shop. However, local city administrators backed out of their promise to support them by opening a competing market, run by non-Papuans, which sells the same goods.

… and Ironic Survival: The story of sago, the clan that protects sago tress vs the mighty Merauke Integrated Food and Energy Estate (MIFEE) project that plans to clear over a million hectares of forests.

More information about this event…