From my point of view, video can become a very powerful tool to build awareness at a community level and can be an effective advocacy tool, particularly if in concert with in-depth research. 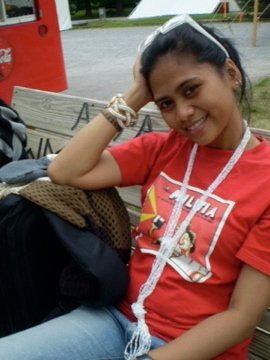 I became interested in community development through video documentary since returning from the USA (Kentucky) in 2008. I was participating in a youth media brief workshop Exchange USA-INA held by Appalsop. So now I do more video work inside communities. This also relates to my studies in social psychology.

I became interested in the world of video after attending a workshop organized by Kelola in May 2006. That workshop opened up the network of video activists (in Indonesia) and lead me to do a movie screening in Makassar. We screened films from our friends in Jakarta such as the Goethe House, Boemboe forums, and Indocs. After that, my friends and I set up a special community for videos and films in Makassar. We called it Left Front community, and we starting collecting videos from friends in Makassar and putting on screenings. We built our network little by little. With Left Front, we were able to send some Makassar videos to festivals. Also, we made a video database for the community in Makassar. We didn’t limit the theme or genre at all.

On the video production side of things, I became interested in community development through video documentary since returning from the USA (Kentucky) in 2008. I was participating in a youth media brief workshop Exchange USA-INA held by Appalsop (www.appalshop.org/exchange/). So now I do more video work inside communities. This also relates to my studies in social psychology. From my point of view, video can become a very powerful tool to build awareness at a community level and can be an effective advocacy tool, particularly if in concert with in-depth research.

In their own words:

Engage Media (EM): Tell us who you are as a filmmaker.

Patmawati Taibe (PT): Most of the time, I am an initiator which means I propose ideas for video productions. I have also been a production manager and I also get involved in research processes.

PT: I like to teach people how to make video, and then to be able to play the video made by them. This way, video becomes a stimulus in the courses that I teach. I also gave students the task of reviewing videos. Because video can be an effective propaganda tool, especially to build awareness around specific issues.

PT: I am interested in issues of identity and environmental awareness.

EM:  You’ve made some videos please tell us a bit about this video and the background?

PT: I’ve made the Sintang Community video compilation, in which there were three videos about the environment situation on the outskirts Melawi Kapuas River in West Kalimantan, Sintang City. These videos were part of my thesis about a flood disaster mitigation intervention program. I was hoping to build awareness about the risks of disaster and to make some preventive measures by starting with simple behavior in communities. Videos are capable of become a media communication between policy makers and communities, in this case, the people living along the river.

PT: Sintang city, West Kalimantan, is interesting because there were the social and cultural issues there have so many implications for the environment. The natural resources situation is increasingly worrying. And, for me, what is happening in Kapuas river deserves has to be documented. The river has an important role in culture, transportation, and community values. I hope that the Kapuas river can be resurrected in its function as the primary means of transportation in the area.

PT: As an independent video maker, my work is not mainstream, and the aims of its creation are typically non-commercial. So online distribution helps us to share information, issues and ideas to an audience that appreciates it and is more diverse. I often upload video that I make and use online networks (non YouTube).